Summary: The first wave count is bearish for the bigger picture and has only one daily chart. This wave count expects a multi-year bear market may be in its early stages to end below 1,046. 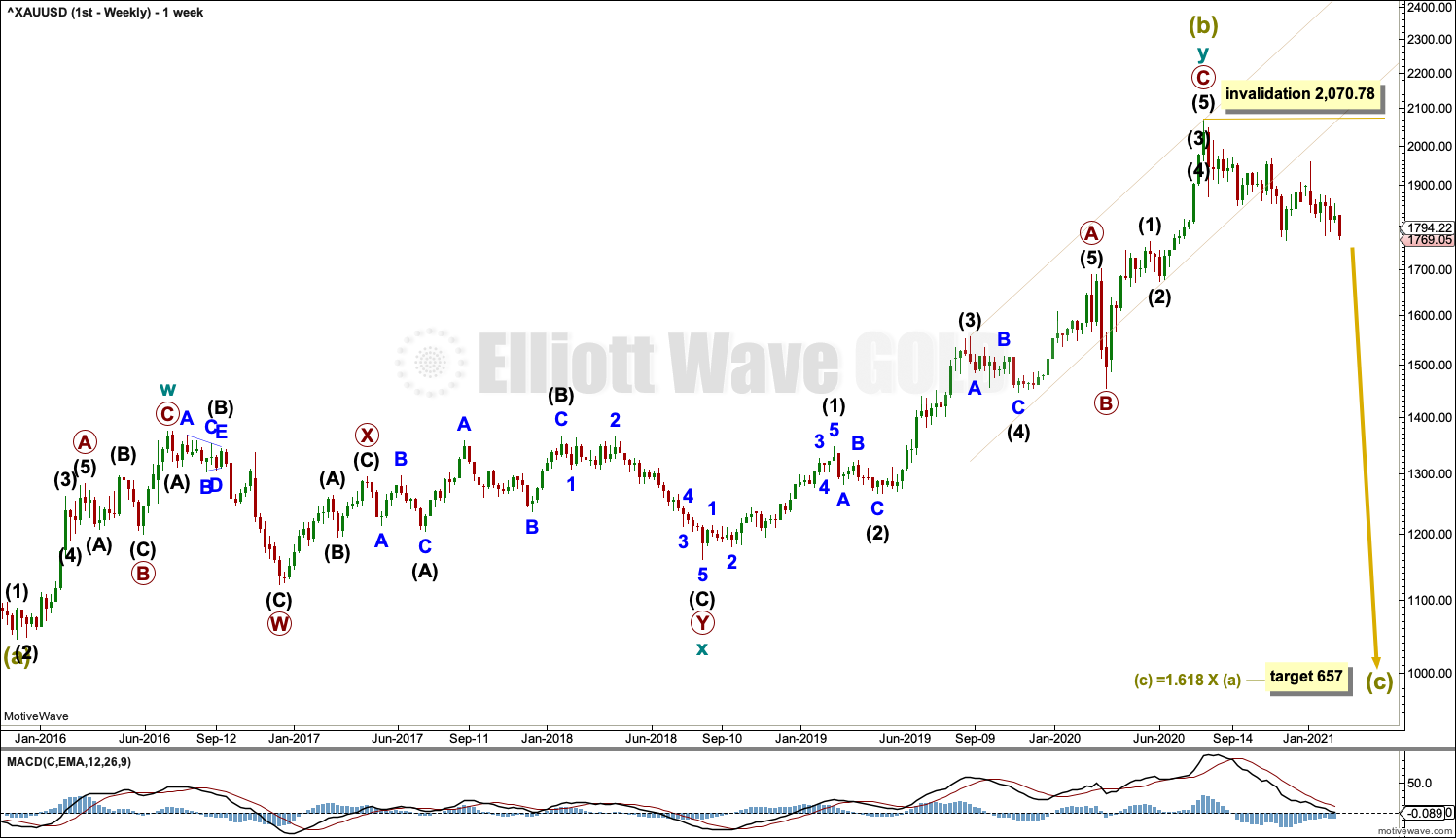 The purpose of the second zigzag in a double is to deepen the correction. Cycle wave y has achieved this purpose.

A best fit channel is drawn about primary wave C to contain as much of this movement as possible. This channel is now clearly breached, which suggests the upwards wave labelled cycle wave y may be over. 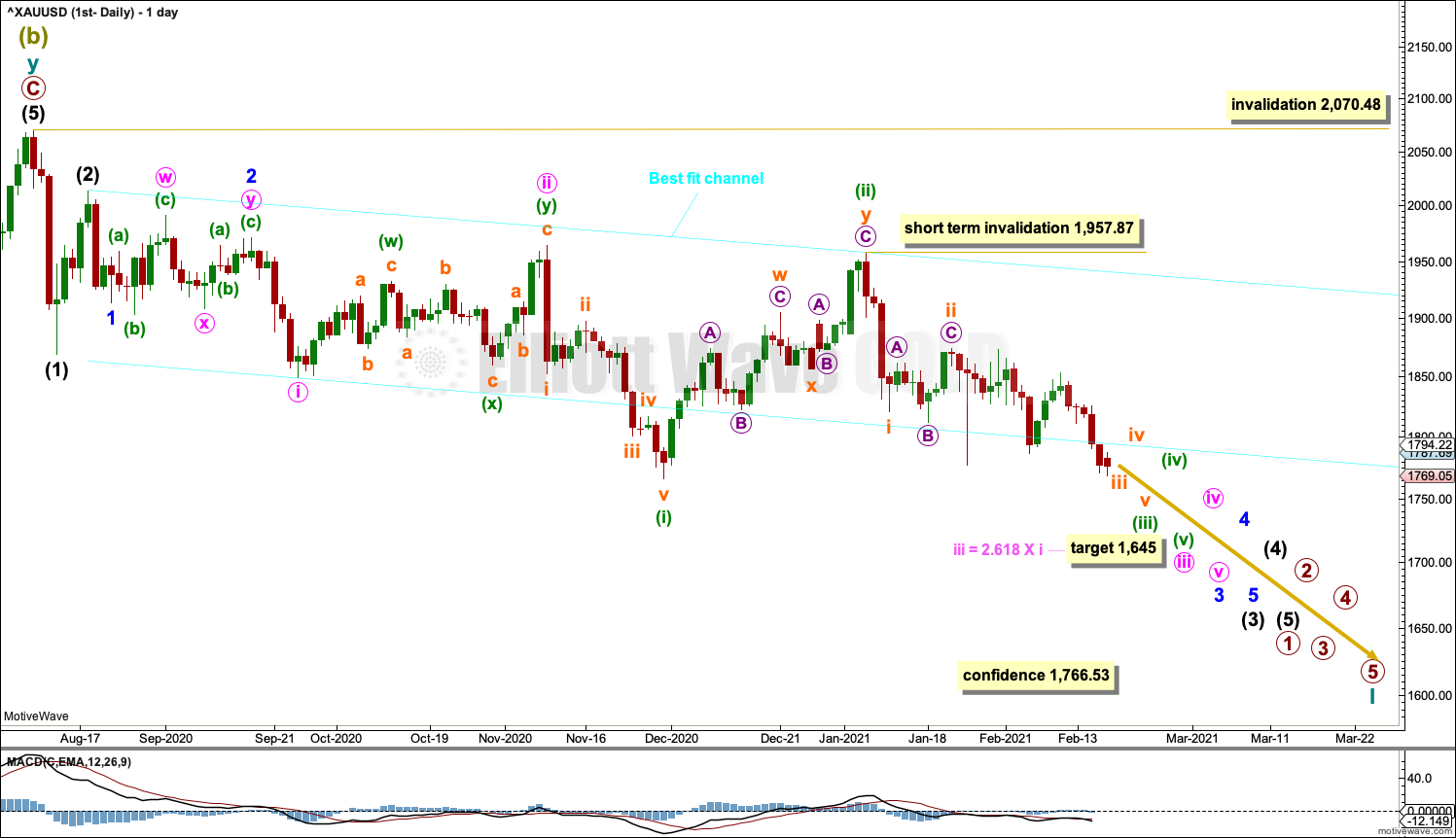 Within a new bear market, primary wave 1 may be an incomplete five wave impulse.

Primary wave 2 within the new downwards trend may not move beyond the start of primary wave 1 above 2,070.48.

Gold typically exhibits extended and strong fifth waves; this tendency is especially prevalent for fifth waves to end third wave impulses one degree higher. One or more of minuette wave (v), minute wave v and minor wave 5 may exhibit this tendency; there may be one or more selling climaxes along the way down. Minute wave iv and minor wave 4 may be relatively brief and shallow.

A best fit channel is drawn as shown. The upper edge may be used as a guide for resistance of any deeper bounces. The lower edge is no longer showing where price is finding resistance or support.

A new swing low below 1,766.53 would add reasonable confidence to this wave count. 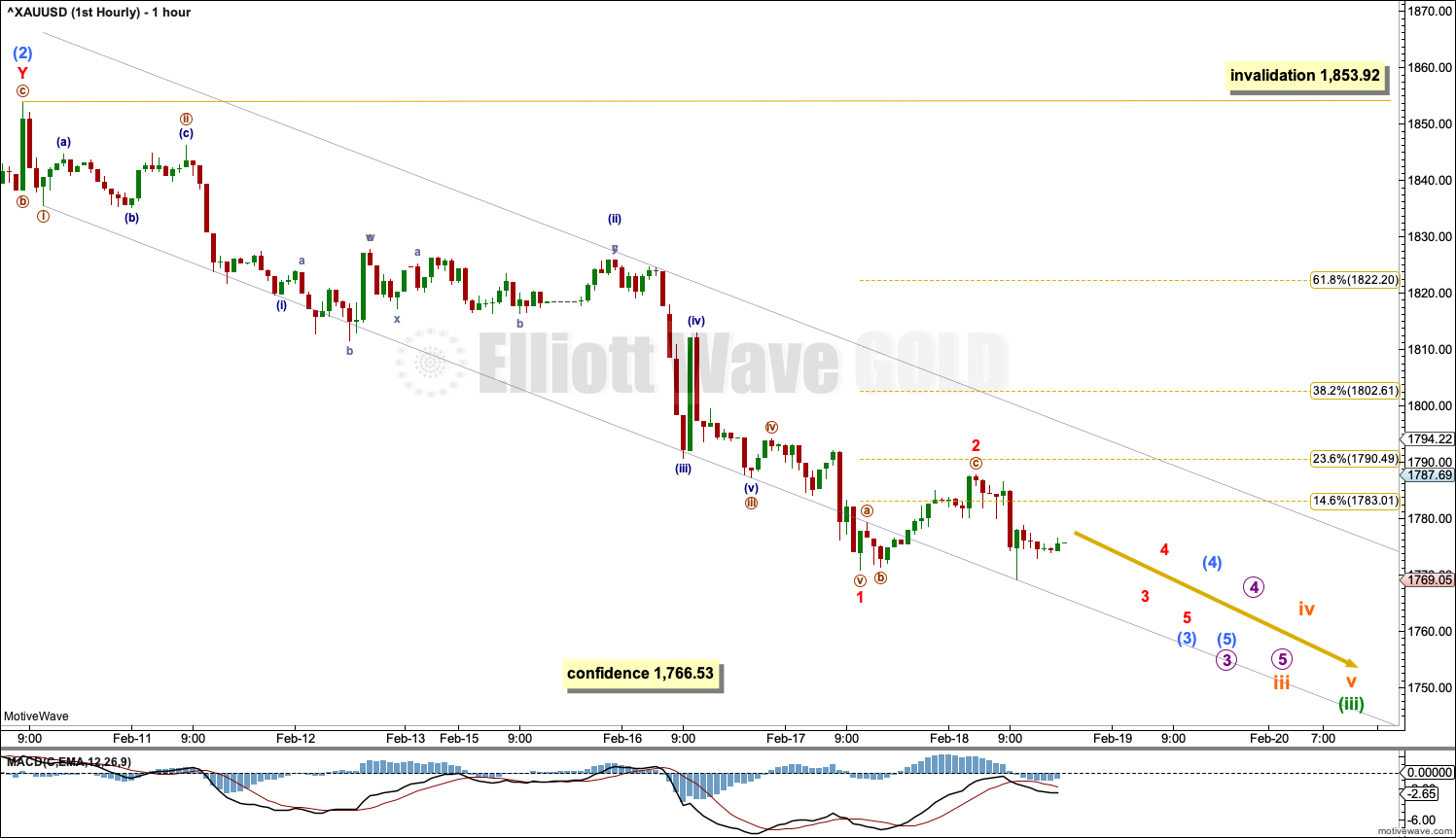 A third wave down at eight degrees may be about to begin. This wave count expects to see an increase in downwards momentum as price approaches the middle of a third wave.

Price is still at strong support, which may initiate a small bounce.

Minuscule wave 2 may more likely be a shallow correction due to a strong downwards pull from a third wave at multiple degrees. 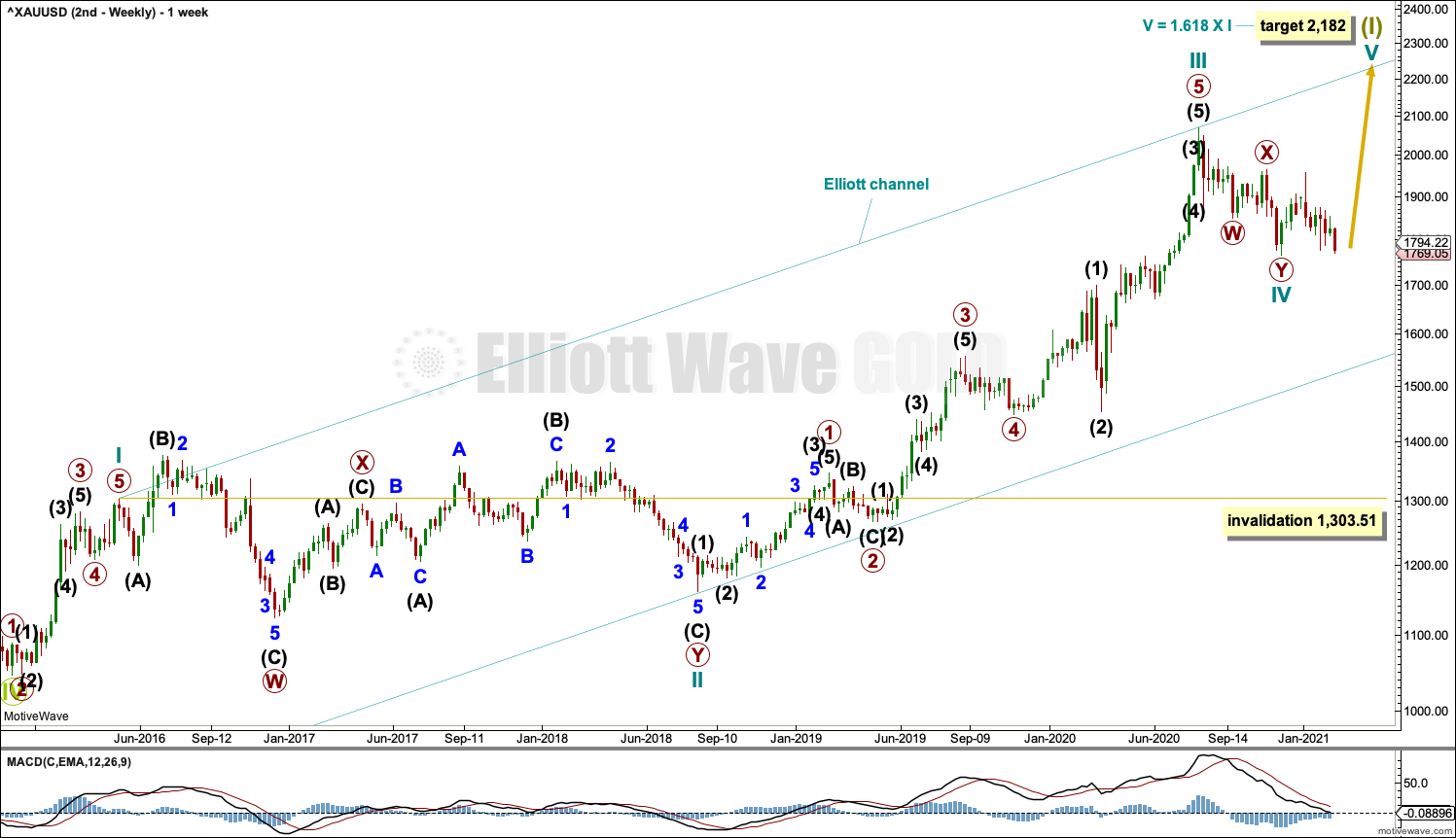 This wave count sees the the bear market complete at the last major low for Gold on 3 December 2015.

If Gold is in a new bull market, then it should begin with a five wave structure upwards on the weekly chart.

Cycle wave I fits as a five wave impulse with reasonably proportionate corrections for primary waves 2 and 4.

Cycle waves III and IV may be complete.

Draw an Elliott channel about this impulse as shown. Cycle wave V may find resistance about the upper edge. 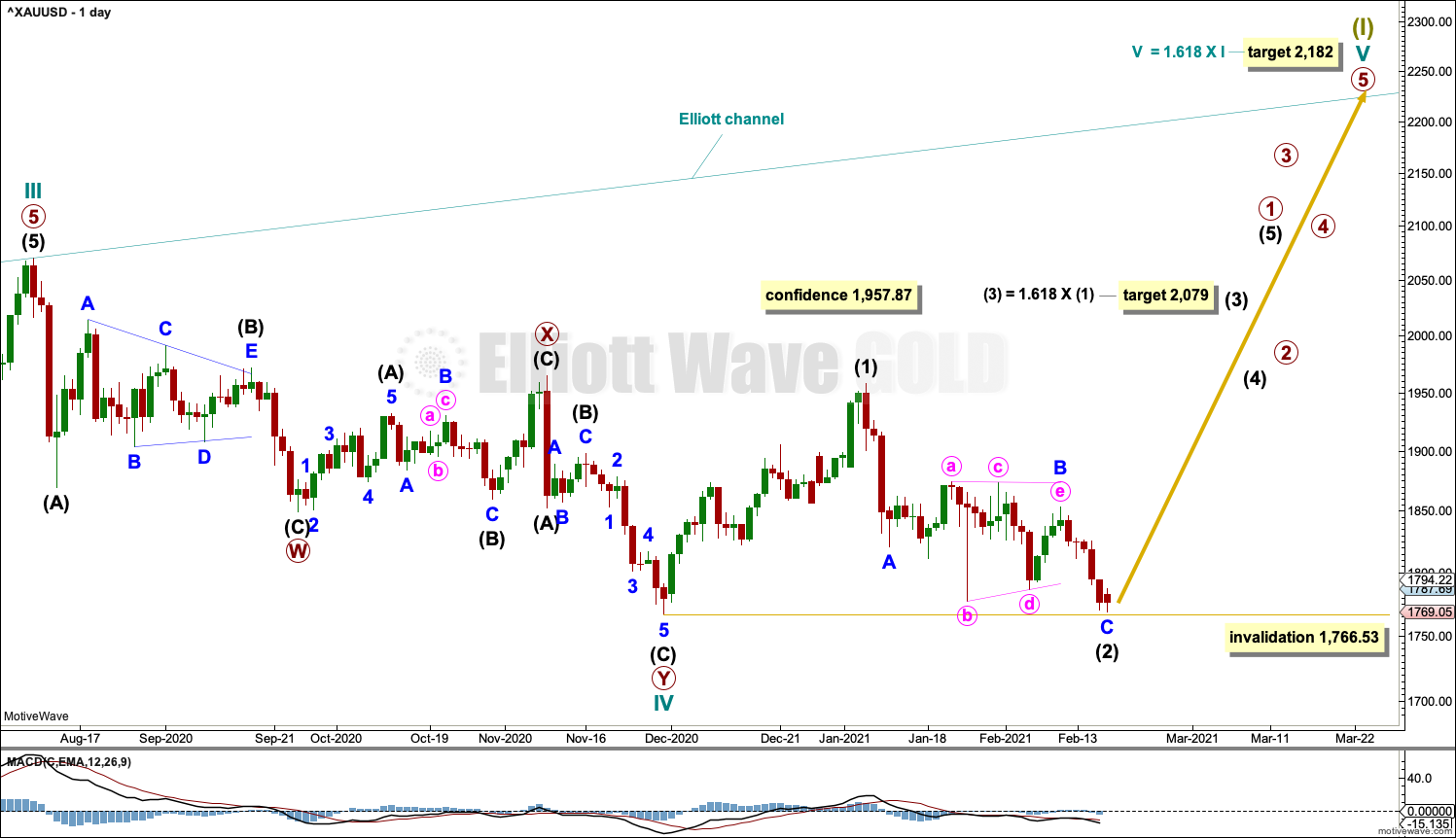 Cycle wave IV may be over as a double zigzag.

If cycle wave IV is complete, then it would have lasted only 17 weeks compared to 119 weeks for cycle wave II. While it is normal for Gold to exhibit fourth waves that are more brief than their counterpart second waves, a difference this great is unusual. This reduces the probability of this wave count.

If this daily chart is invalidated in the short term with a new low below 1,766.53, then it would change to see cycle wave IV continue lower as a triple zigzag. The rarity of triple zigzags means such a wave count would have a low probability. 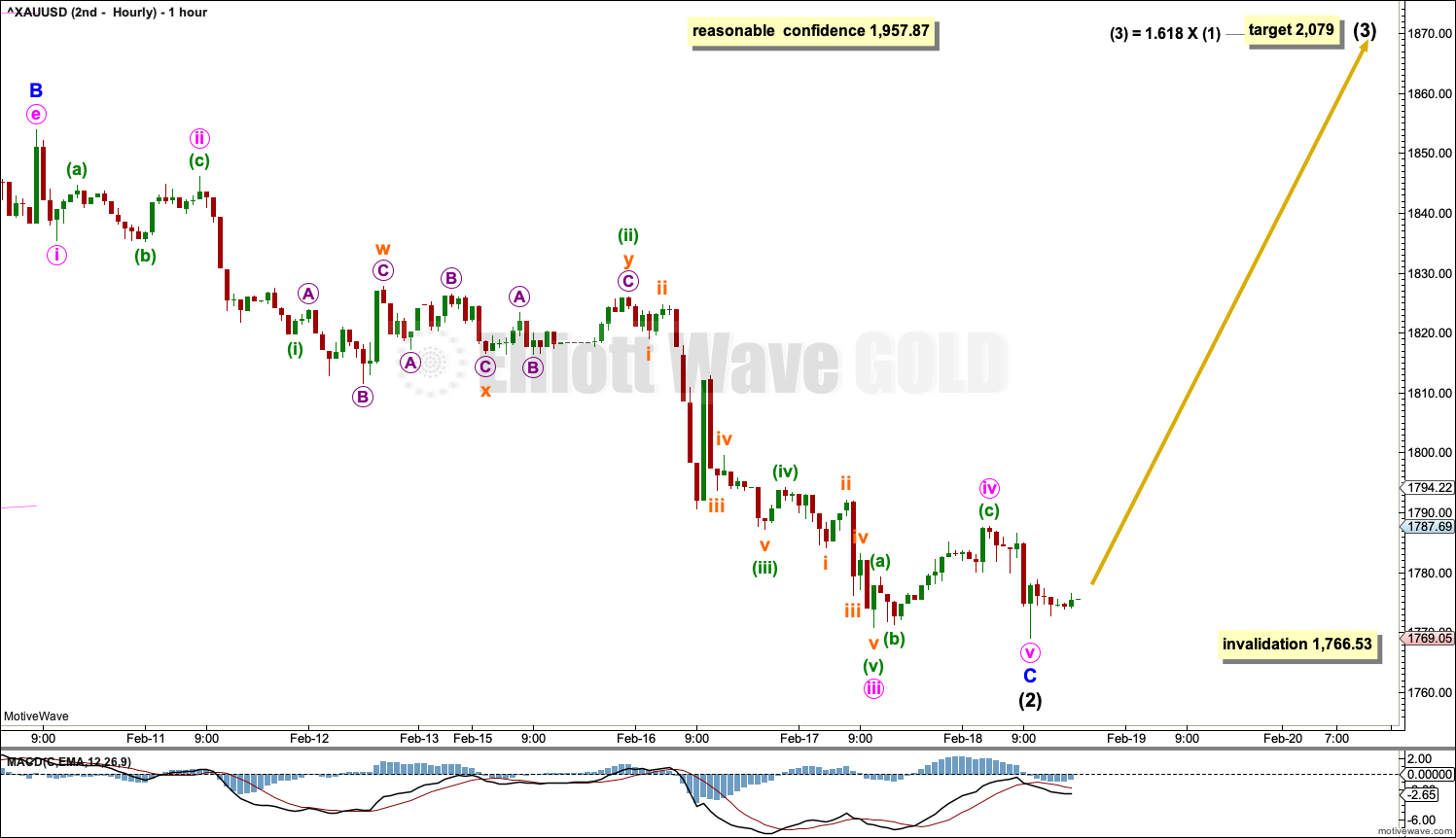 Intermediate wave (2) may have continued lower today. Minor wave C may be a complete five wave impulse that is over at today’s low.

The target for intermediate wave (3) is again recalculated.

It is possible for the second wave count that cycle wave III may be an incomplete impulse. Primary wave 5 within the impulse may be underway.

There is alternation between an expanded flat of primary wave 2 and a double zigzag of primary wave 4. Both are of a similar depth. Primary wave 2 lasted 3 weeks while primary wave 4 lasted 17 weeks. It is unusual for Gold to exhibit fourth waves that are much longer lasting than counterpart second waves. The probability of this wave count is reduced. 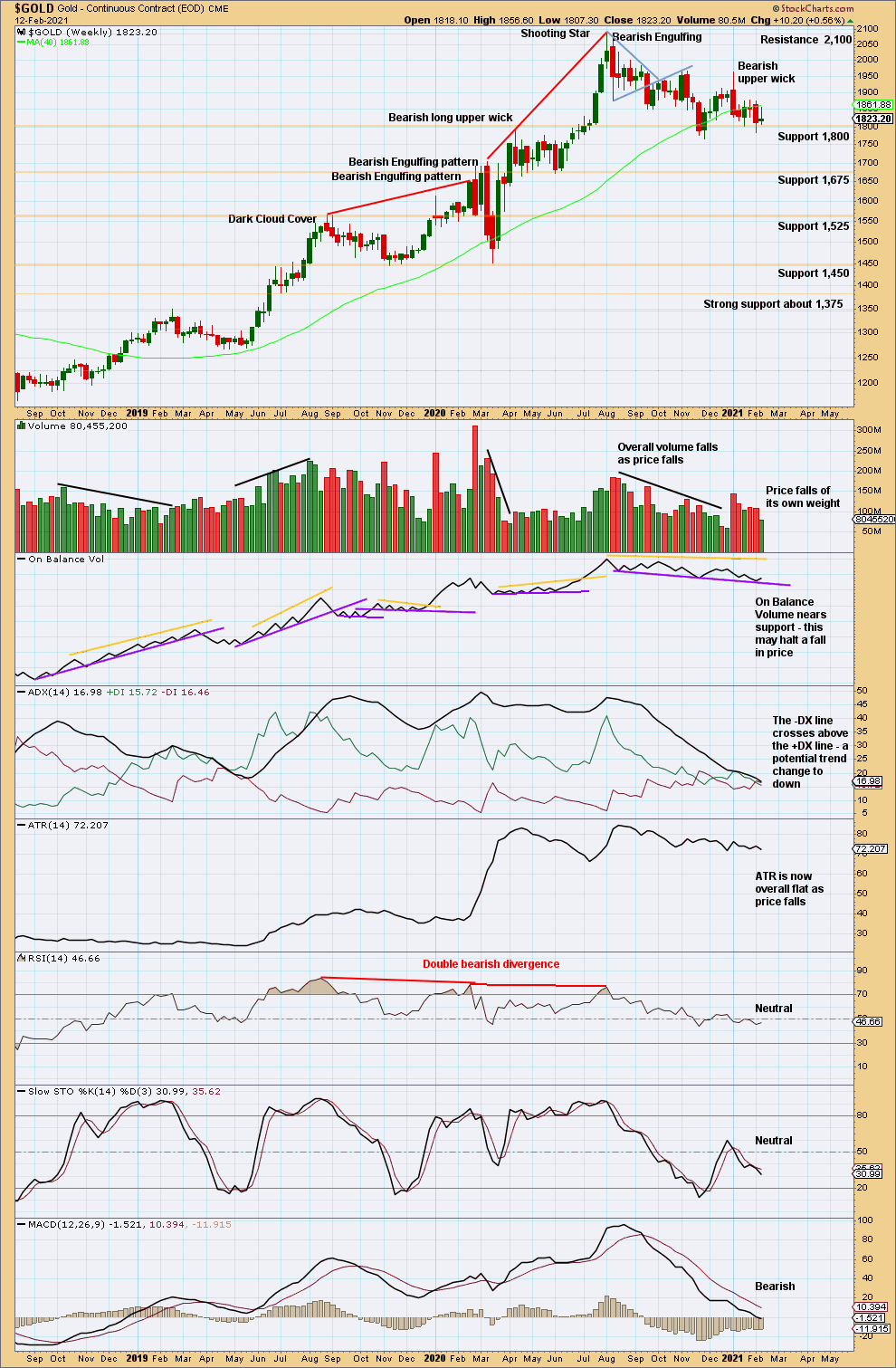 At the last high were two bearish candlestick patterns with overbought RSI exhibiting double bearish divergence. It is possible there may have been a 180° trend change at the high. A new swing low below 1,671.70 would add confidence in that view.

Price and On Balance Volume both remain above support.

It remains possible that either the bullish or bearish Elliott wave count may be correct. An open mind for both possibilities is still required. 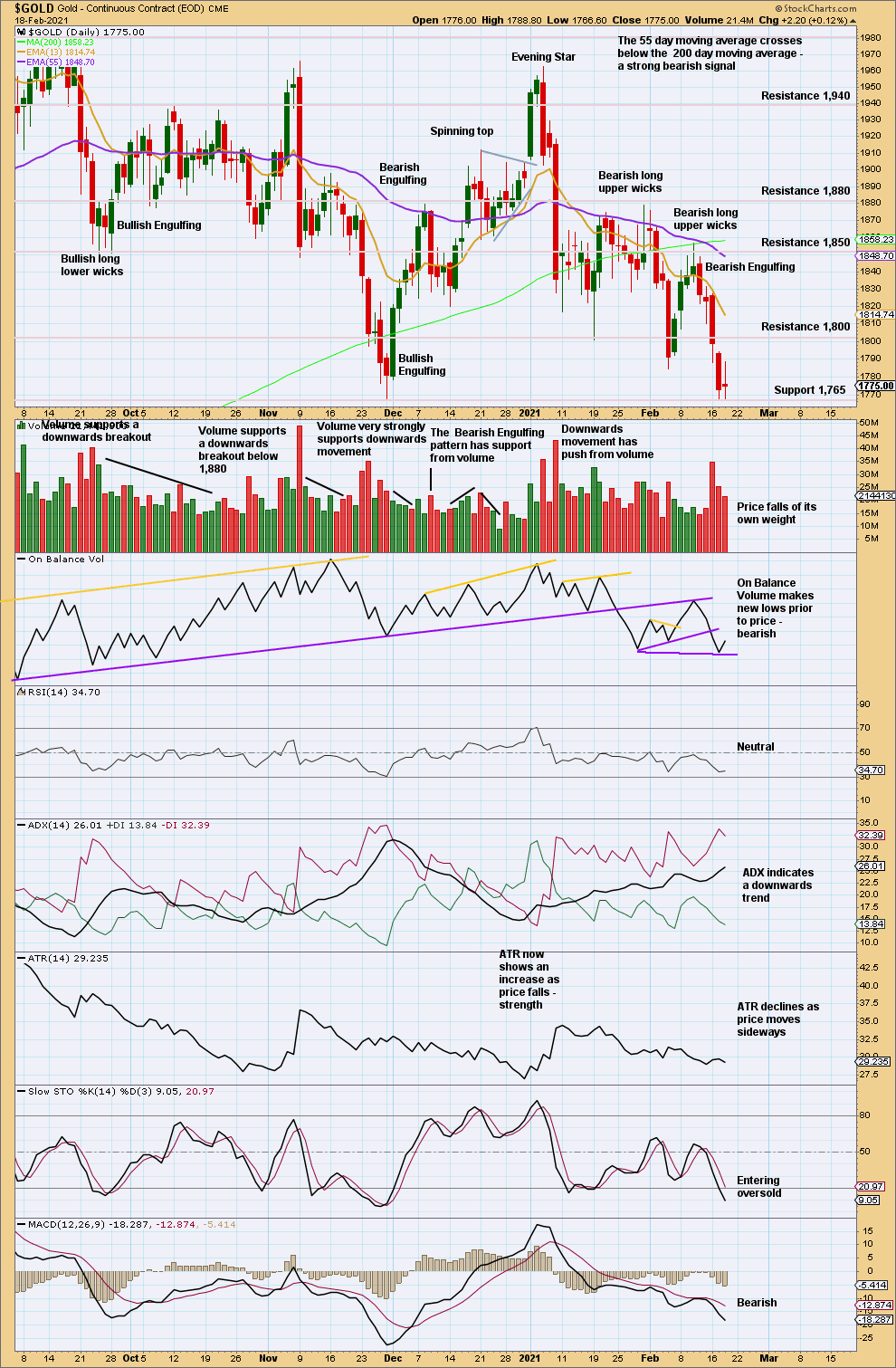 From the high on August 7, 2020, there has been a series of lower lows and lower highs. While the last swing high now on the 6th of January at 1,962.50 remains intact, then this view of a possible downwards trend, at least at the daily chart level, should remain dominant.

Downwards movement has strong push from volume and increasing ATR.

Overall, this chart remains bearish. There is still most likely a downwards trend, but within this trend are deep and time consuming bounces. RSI is not oversold, and the trend is not extreme.

It would be normal to see a small counter trend bounce here with price near strong support.

The trend is down. 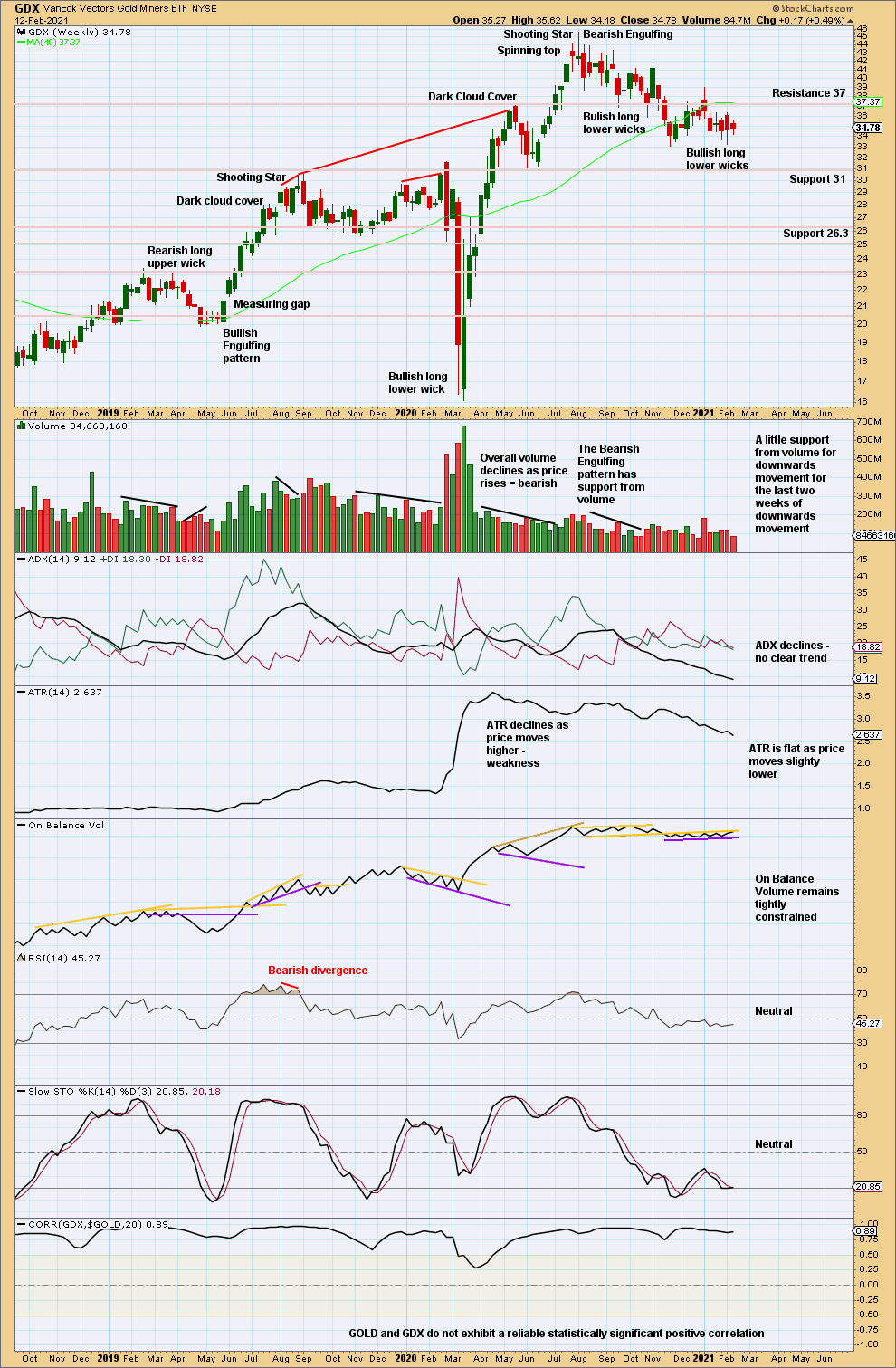 If GDX makes a new swing high above 41.59 and On Balance Volume breaks above resistance, then the pullback of the last several weeks since the high in August 2020 may be considered over.

Currently, GDX is consolidating. A breakout is required for confidence in the next direction. 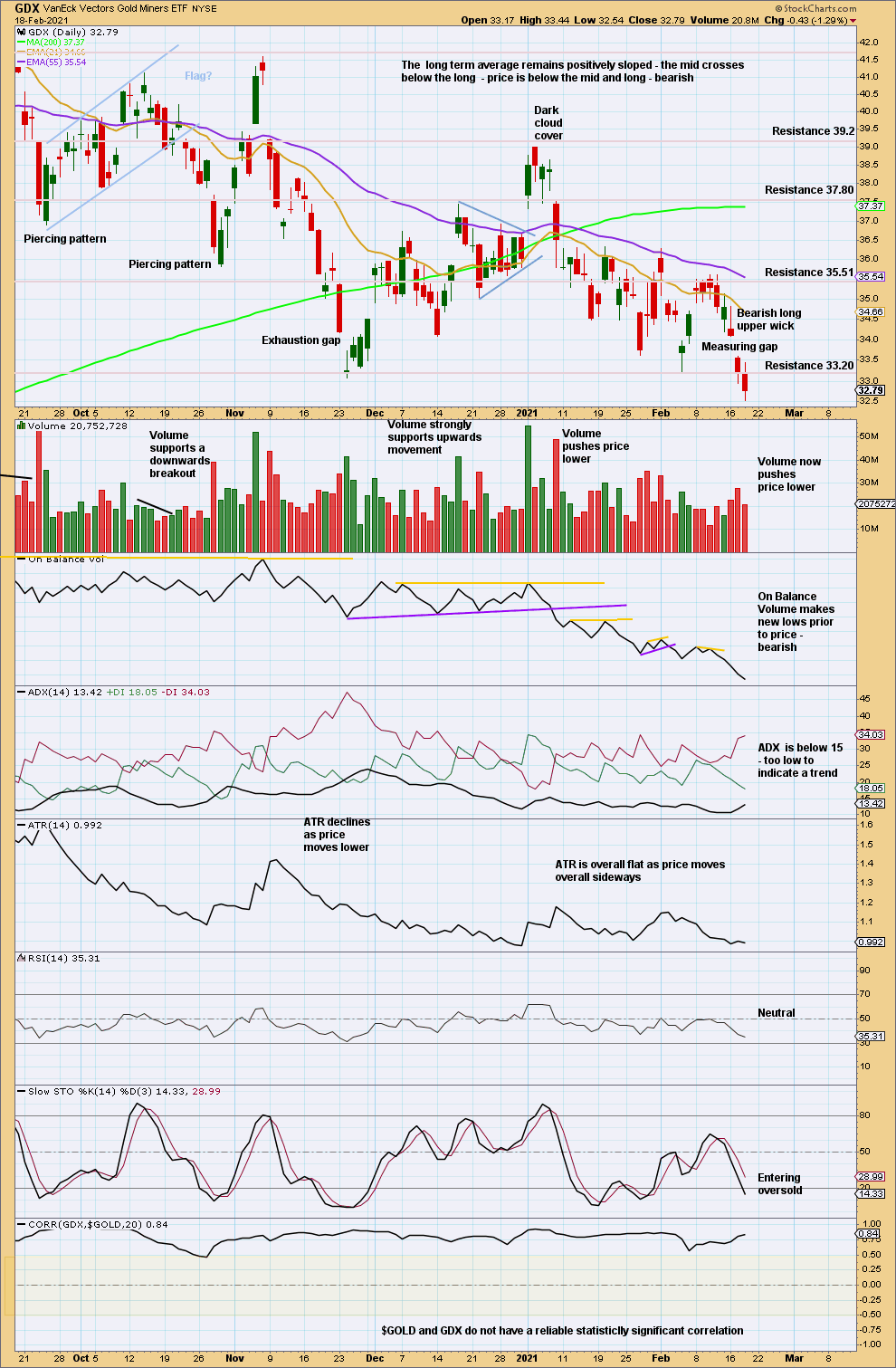 Overall, from the high on August 5th, there is still a series of lower lows and lower highs, the basic definition of a downwards trend. For this view to change a new high above 39.01 would have to be seen.

The mid-term 55 day average has crossed below the long-term 200 day average. This crossover is bearish.

If support about 33.2 is breached, then next support below is about 31.

A target calculated from the measuring gap at 32.05 is now close by.