Last analysis on the 23rd of October expected a continuation of downwards movement for Bitcoin. Three targets for downwards movement to end were 7,229, 6,879 and 5,614. However, on the 27th of October a chart was updated which expected the low may be in at 7,446.99. This has since been invalidated as Bitcoin continues to fall.

Focus of analysis from this point onwards is on identifying the next potential buying opportunity for Bitcoin.

Summary: The Elliott wave structure is almost complete. One more low may still be required. A target range based upon past behaviour is at 7,009 to 3,827. 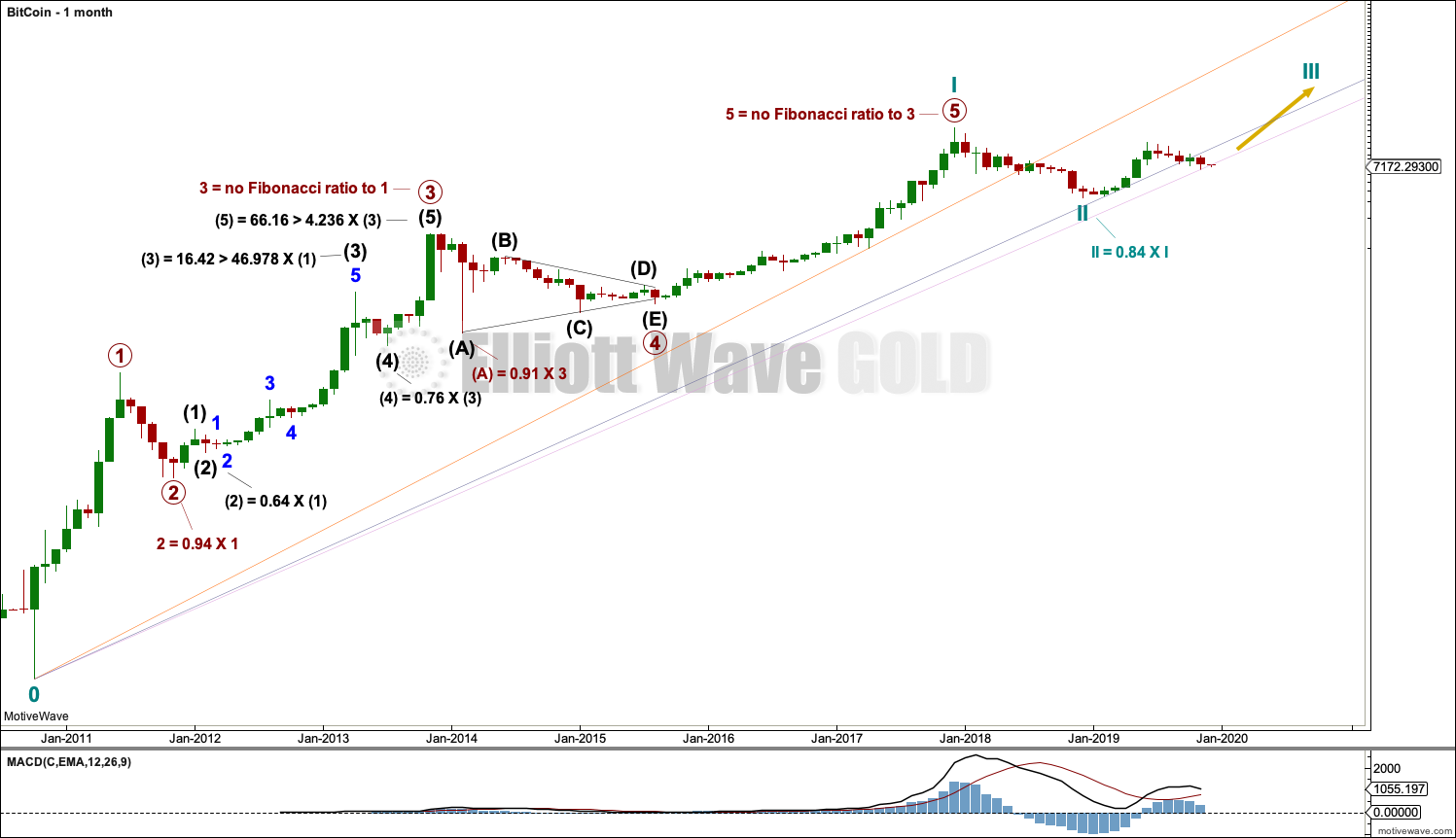 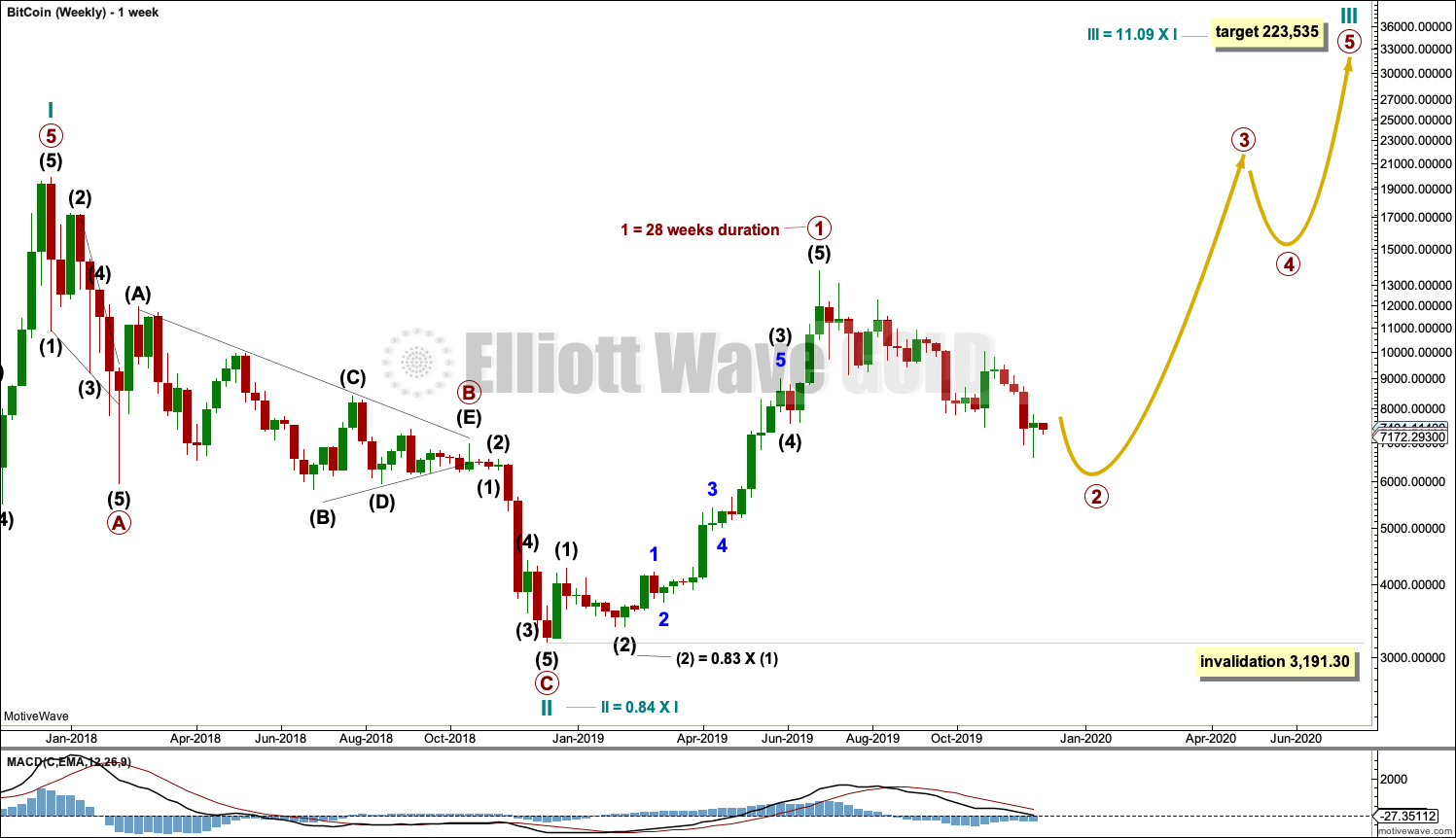 The range of the depth of corrections for second waves in minor, intermediate or primary degree positions is from 0.35 to 0.94, with the average at 0.68.

A target range is calculated on the daily chart below.

In the price history of Bitcoin to date second waves of all degrees subdivide (in order of frequency) as zigzags (10), double zigzags (7), flats (3) and combinations (only 1 example).

At this stage, a zigzag may be eliminated for primary wave 2. The first wave down labelled intermediate wave (W) subdivides as a three and not a five.

A double zigzag is the second most common structure for a second wave, so this is what it may be unfolding as. The second zigzag in the double labelled intermediate wave (Y) has brought price below the 0.618 Fibonacci ratio, which is common for a second wave for Bitcoin.

Looking back at the monthly chart, depths for wave degrees at primary or cycle degree range from 0.64 to 0.94. So far primary wave 2 has found a low within this range.

In terms of duration expected for primary wave 2, the price history of Bitcoin shows that second waves at primary or cycle degree were 0.67 and 0.14 the duration of their counterpart first waves. Here, primary wave 1 lasted 193 sessions. In this instance, primary wave 2 may be nearing equality in duration with primary wave 1. So far it has lasted 160 sessions.

The structure of primary wave 2 may need a final low for the last fifth wave. 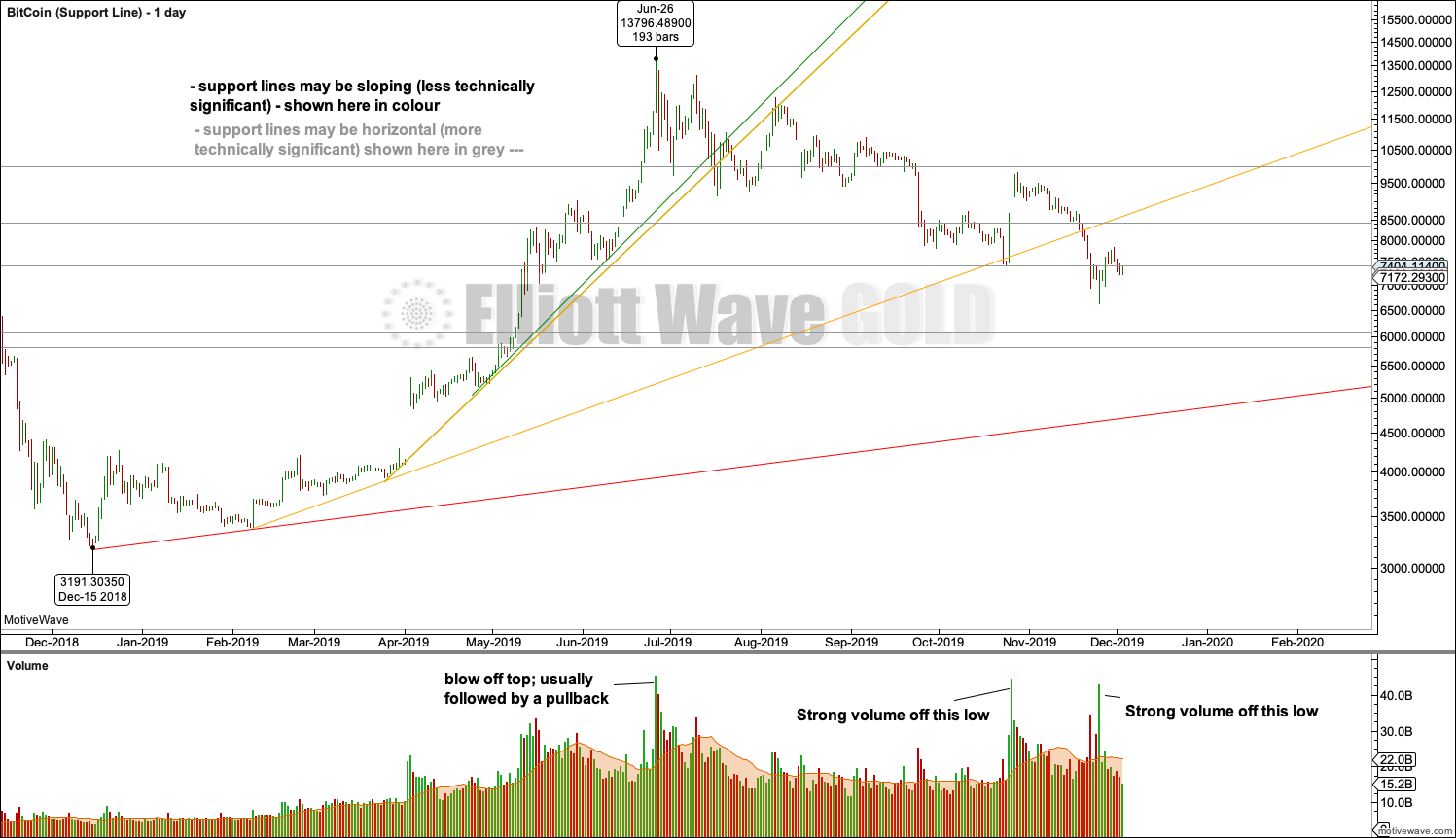 This daily chart is on a semi-log scale. This is the correct scale to view sloping support and resistance.

In Bitcoin’s price history both prior second waves at primary and cycle degree have breached a support line, which contained the first wave of the same degree. This is normal and to be expected.

Four potential support lines for the current primary wave 1 are drawn. The lowest in red looks unlikely to be breached by the current pullback. The highest in green and yellow and now orange have been breached. 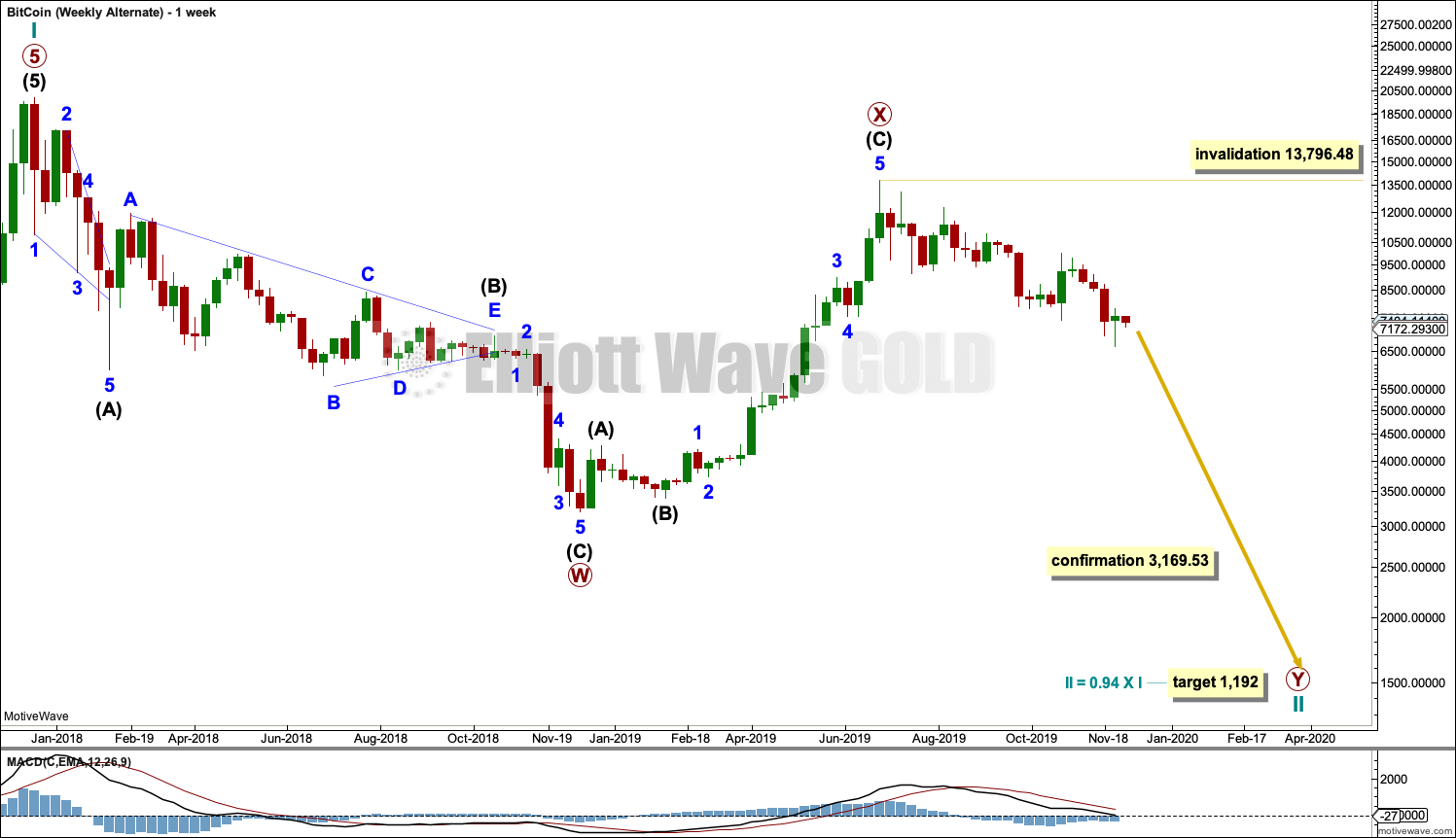 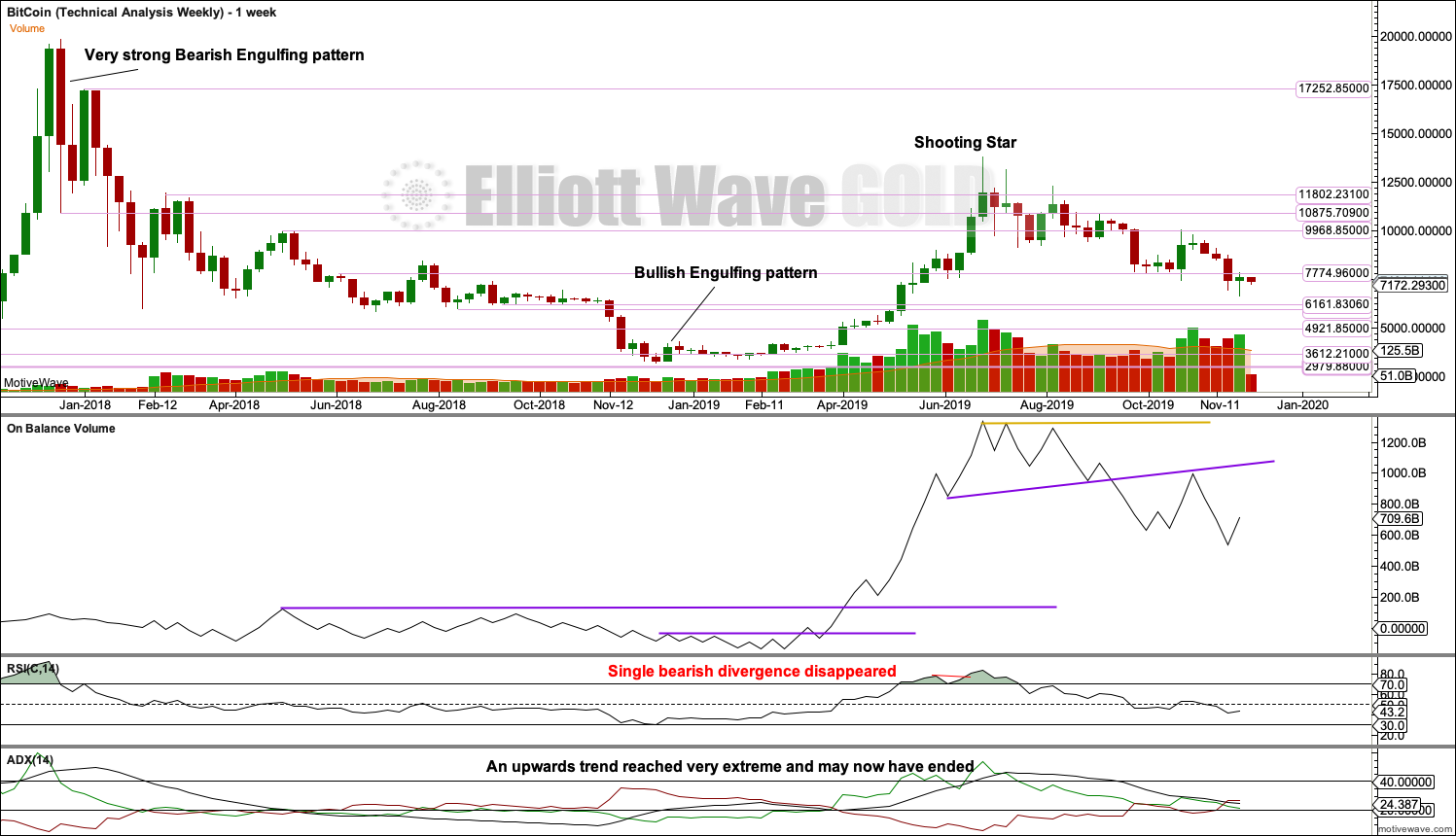 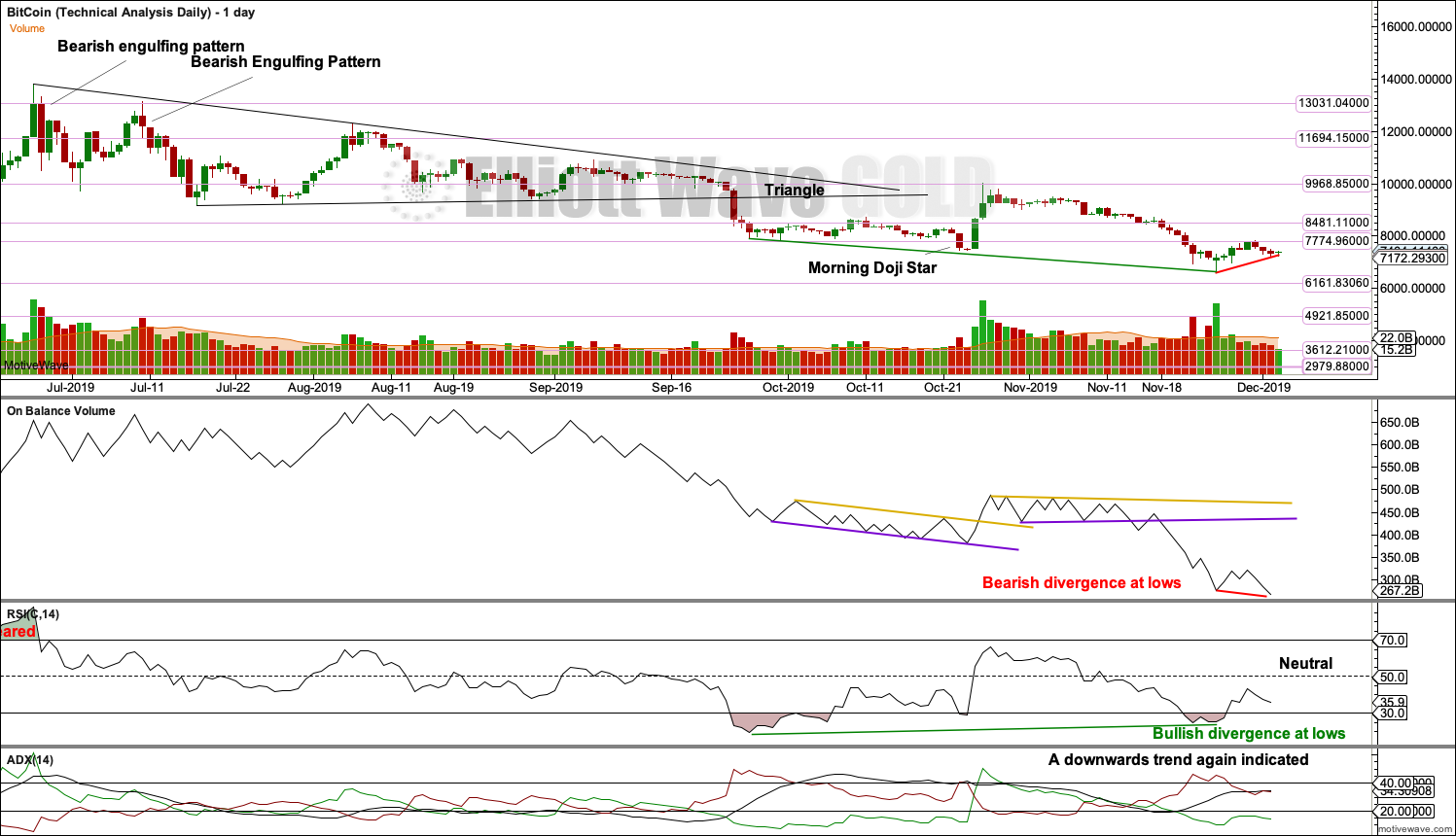 Support levels are noted as possible lows for the current deep pullback.

A target calculated from the triangle pattern is at 4,847.

More weight will be given to mid-term divergence between price and RSI. It looks like a low may be either already in or more likely may come very soon with one more low.