A pullback or a time consuming consolidation was expected after last analysis on the 26th of August. Price continued lower until the 20th of September and from there has bounced up strongly.

This analysis will attempt to determine if the bounce is just an upwards swing within an ongoing consolidation or the start of a new upwards trend.

Summary: Price is within a small consolidation. It looks like an upwards breakout may be more likely than downwards. A close above resistance about 96.80 on an upwards day with support from volume would be an upwards breakout. If that happens, then look for the upwards move to end about 97.19 to 97.87. 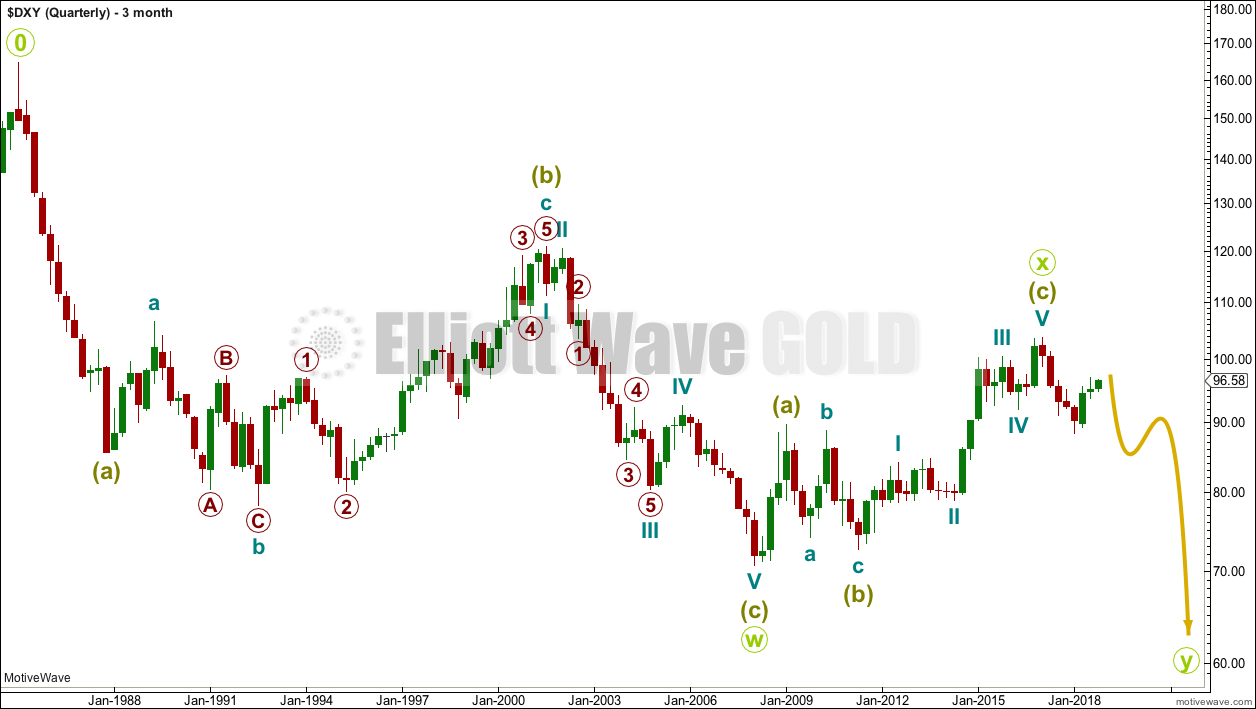 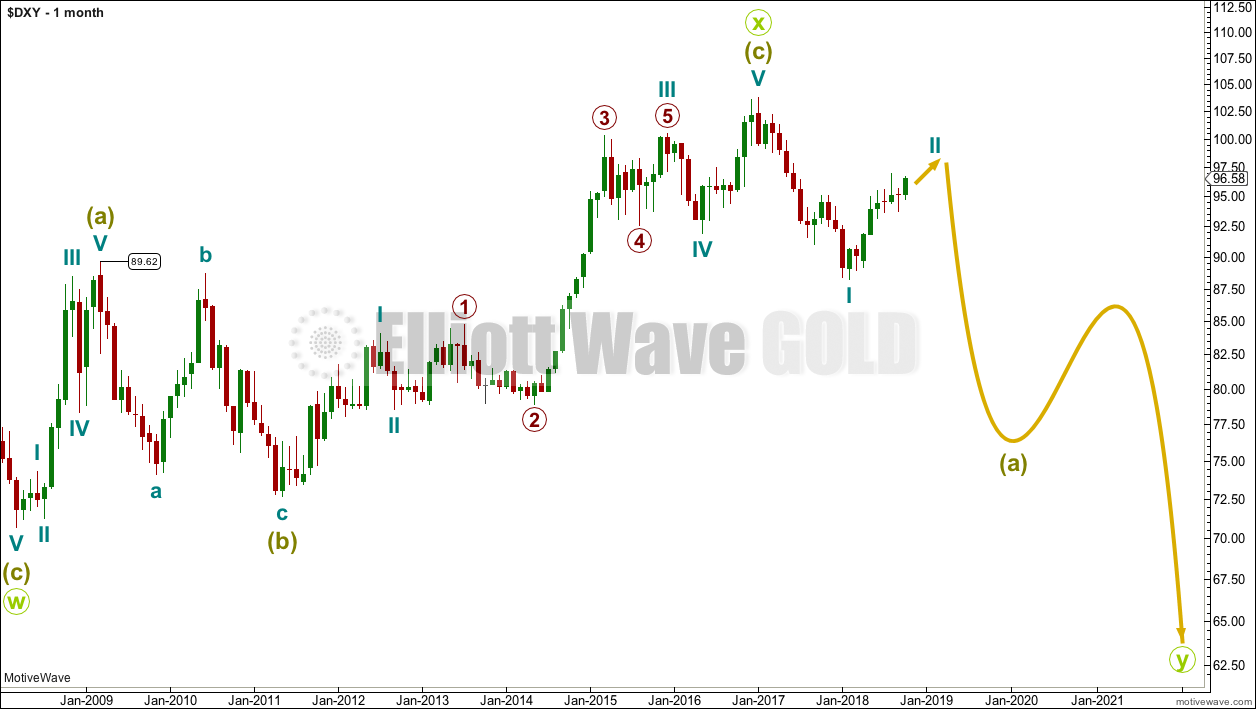 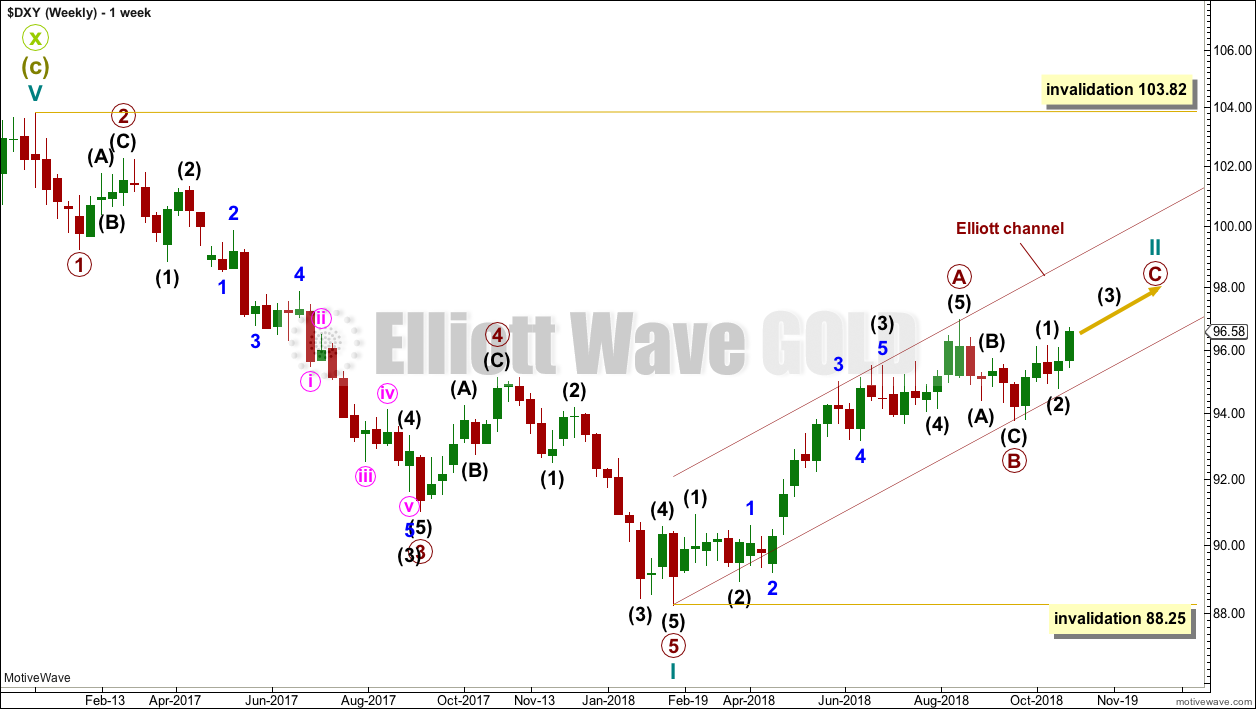 For the USD Index, historically the first second wave correction within a new trend is usually extremely deep, about 0.80 to 0.90 of the first wave it corrects. It would be typical here to see Cycle wave II reach to 0.80 or deeper of cycle wave I. If my target on the daily chart below is wrong, it may not be high enough.

Primary wave A may now be a completed five wave impulse.

Primary wave B may be complete as labelled on this weekly chart. However, it may also be labelled as incomplete as per the labelling for this movement on the alternate weekly chart below. 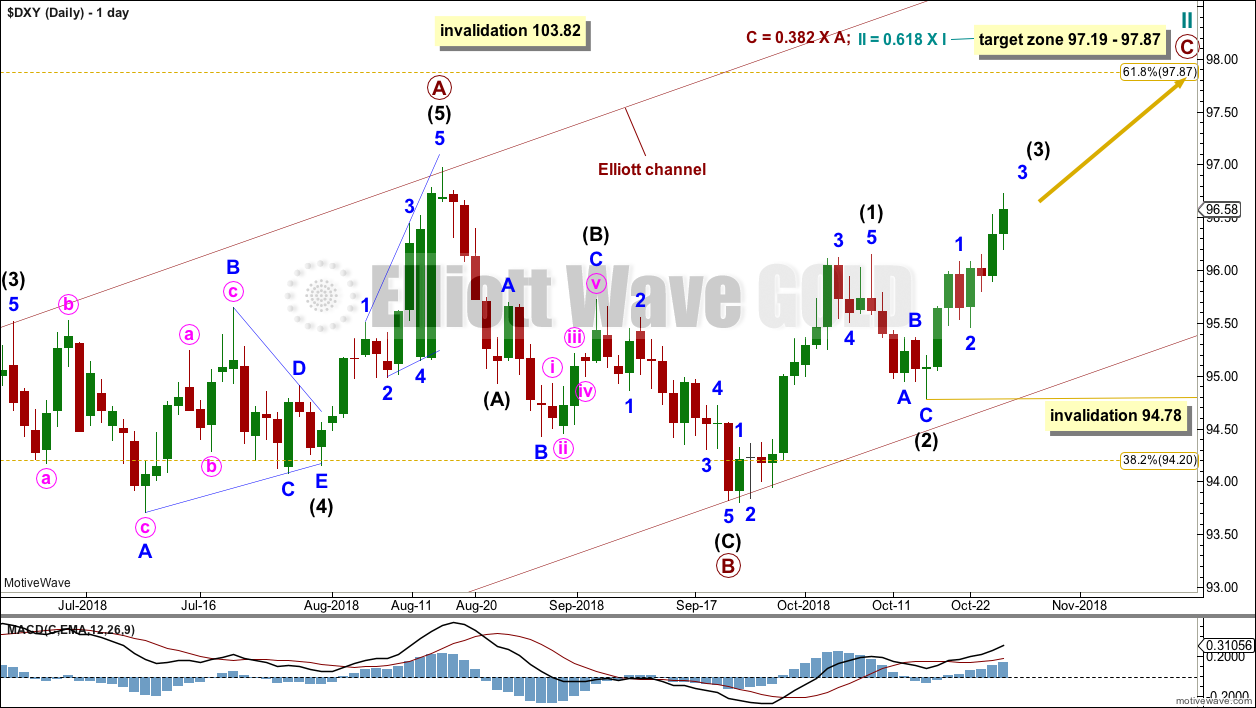 If primary wave B is complete, then primary wave C should have begun. Primary wave B will fit as a brief and shallow zigzag. This is entirely possible; B waves exhibit the greatest variety in Elliott wave structure and price behaviour.

Within intermediate wave (3), no second wave correction may move beyond the start of its first wave below 94.78.

Intermediate wave (3) may now be ready to exhibit an increase in upwards momentum, as the middle strongest portion of it passes. This may have the strength to effect an upwards breakout from the current consolidation. If price closes above resistance about 97 on an upwards day with support from volume, then have confidence that a third wave up at two degrees is underway.

It is also possible to move the degree of labelling within primary wave B all down one degree and see it as an incomplete flat, combination or triangle. 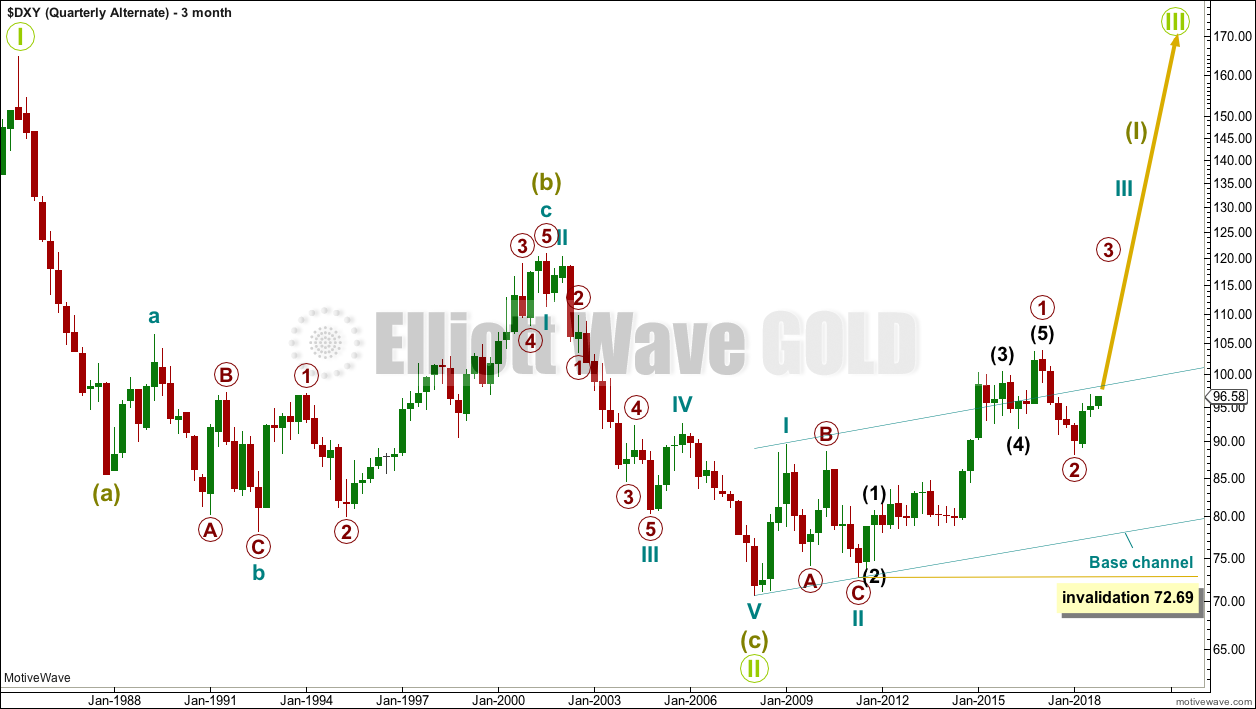 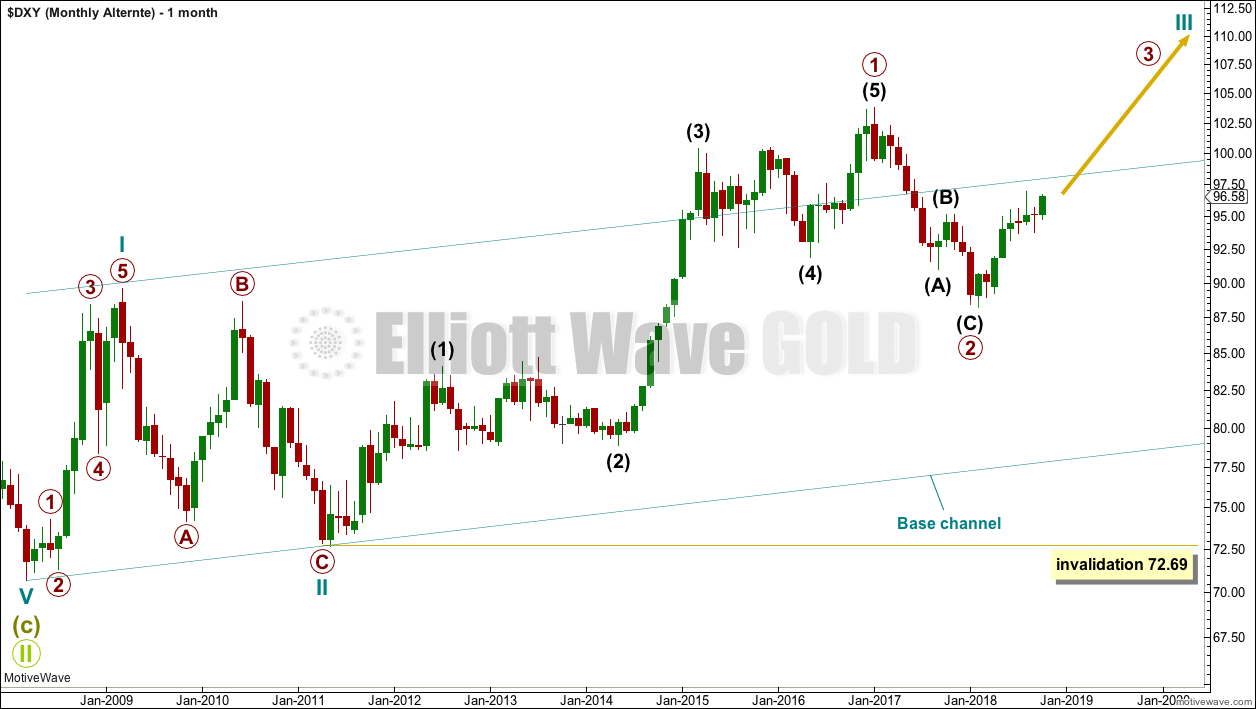 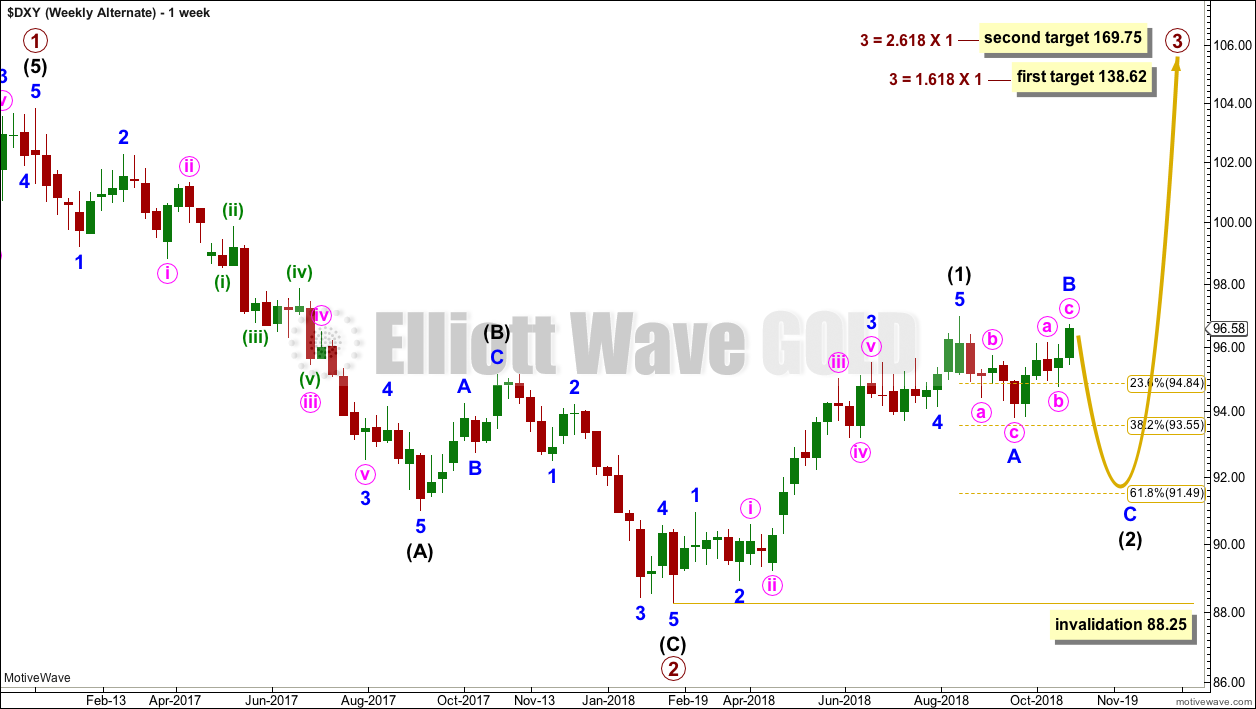 Intermediate wave (2) may be an incomplete flat, double zigzag or combination. The first wave down within it is labelled minor wave A; this is a complete zigzag. Minor wave B may now be complete or almost complete, but it may continue higher to make a new high above the start of minor wave A at 96.98 as in an expanded flat. 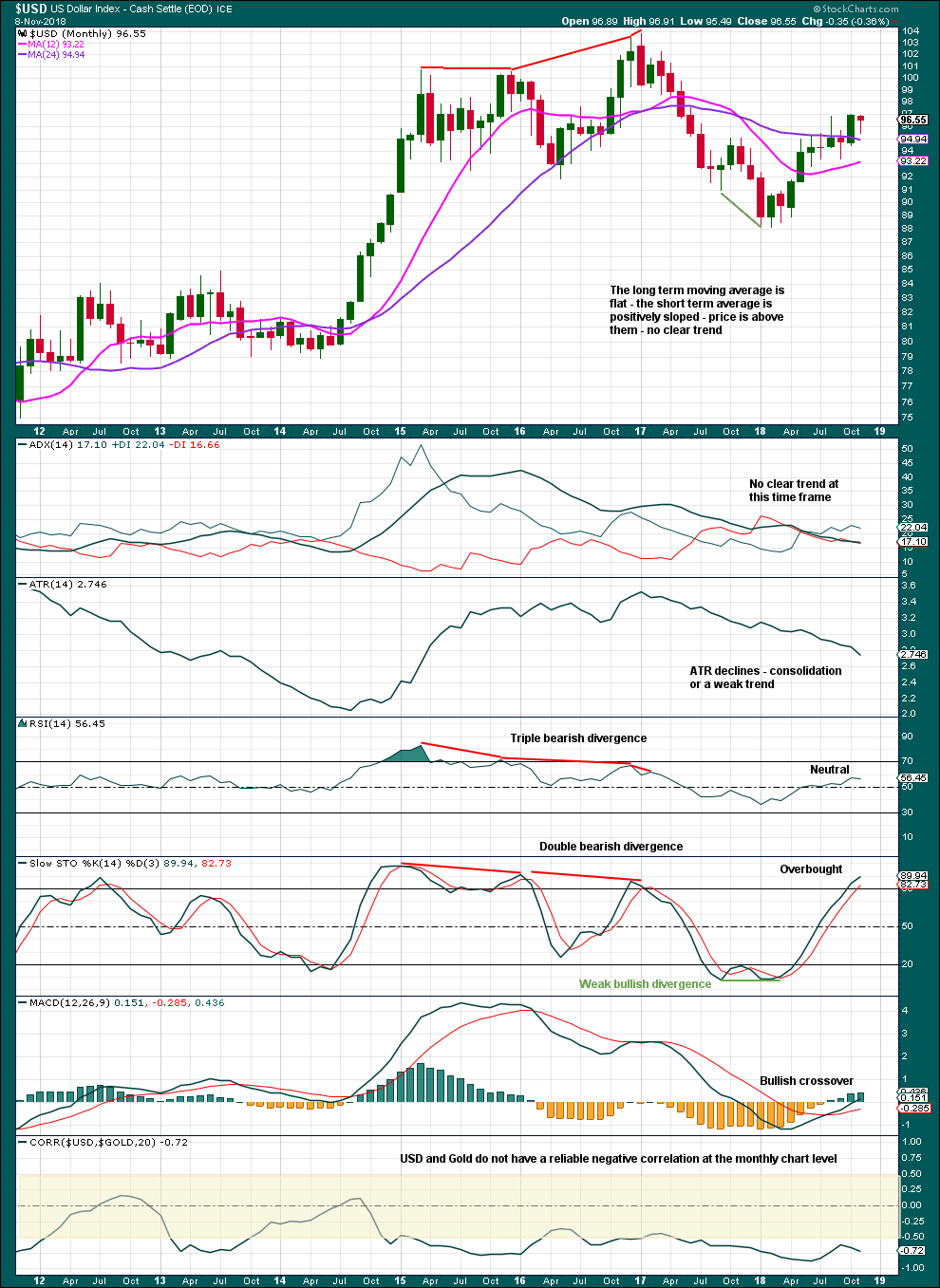 October was a strong bullish month. This may be reasonably expected to be followed by more upwards movement. This supports the main Elliott wave count. 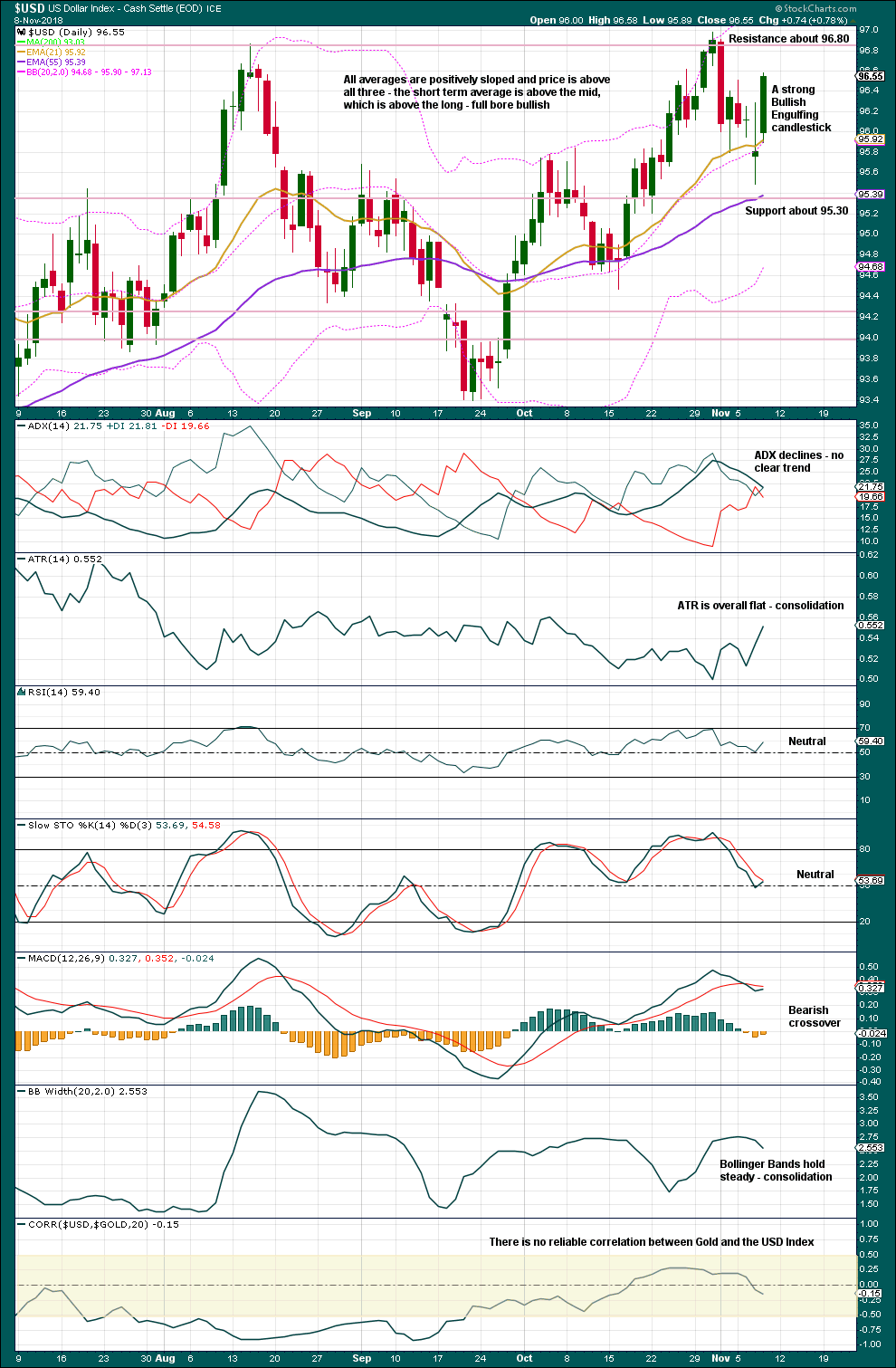 Unfortunately, StockCharts do not provide volume data for currencies; no volume analysis is made for the USD Index. This does reduce the accuracy and depth of this analysis.