Last Bitcoin analysis, on August 11th, expected upwards movement towards a target about 57,669 as most likely. Since August 11th price has mostly moved sideways and a little higher.

Summary: At this stage, all three short-term daily Elliott wave counts expect more upwards movement. The target at 57,669 is approximate only. This upwards movement is expected to be a continuation of a much larger consolidation, which looks most likely to continue sideways as a triangle for a few more months. 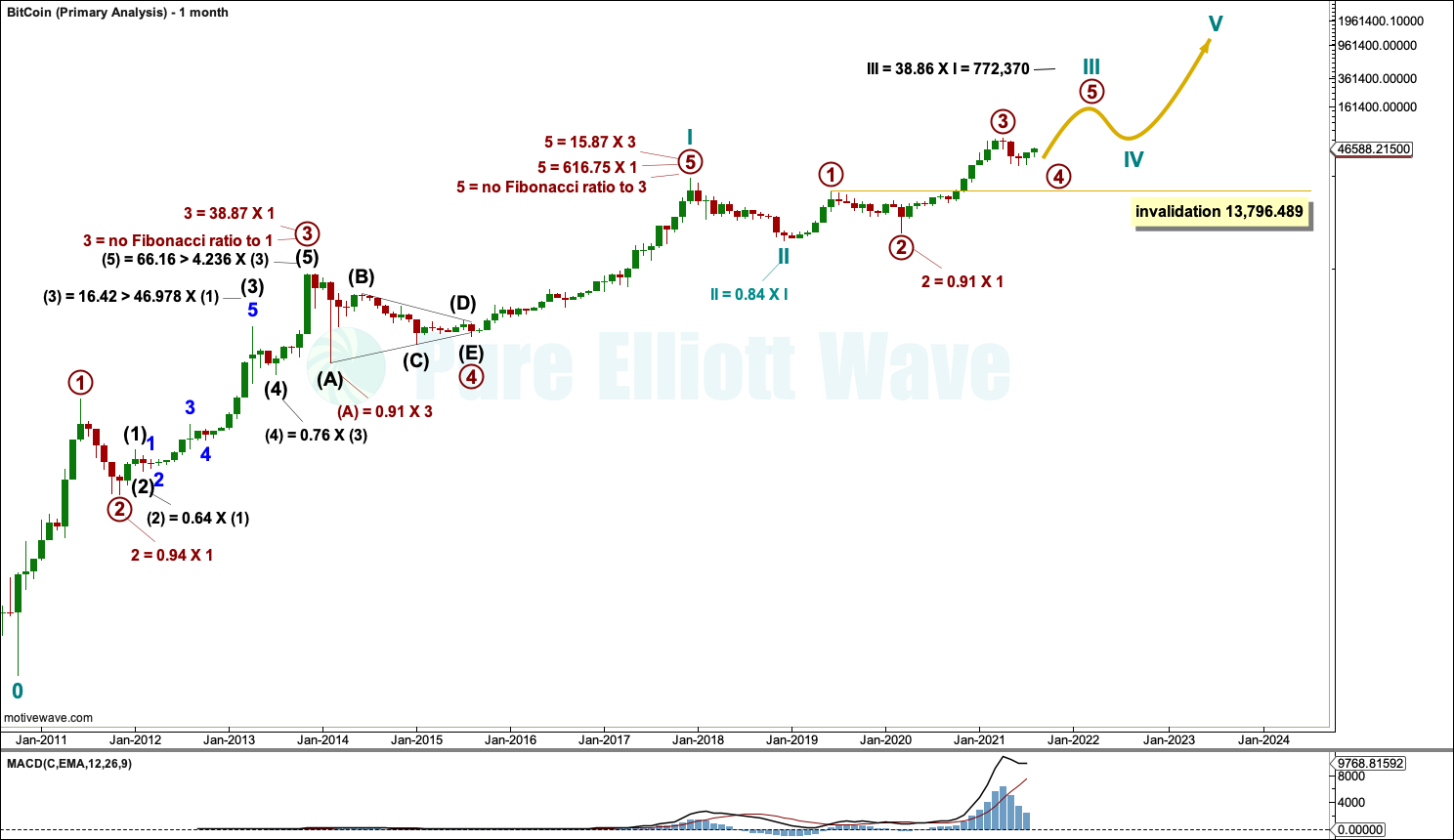 What is very clear from this chart is that Bitcoin forms classic bubbles. It has done so now several times and is now doing so again. So far each bubble has popped and Bitcoin has collapsed, to then thereafter form a new bubble. Each bubble is larger than the one prior; so if another Bitcoin bubble is forming, it may be expected to take price substantially higher.

The weekly chart focusses on cycle wave III. Cycle wave III may only subdivide as an impulse. Within the impulse: Primary waves 1, 2 and 3 may now be complete, and primary wave 4 may now be underway. 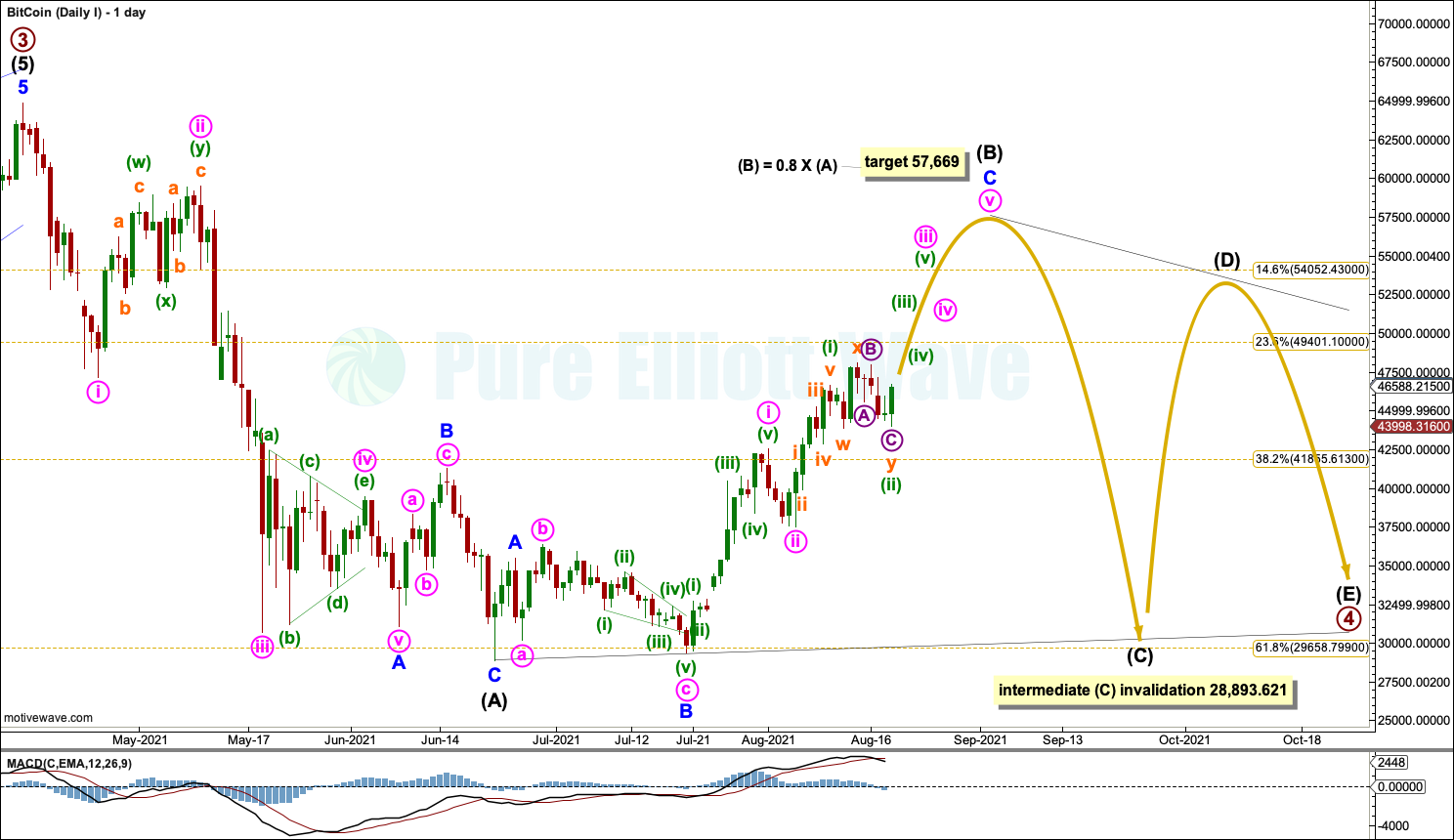 Primary wave 4 looks most likely to subdivide as a triangle if support about 29,000 holds. Technical analysis suggests it may.

A triangle may take many months to complete.

At this stage, this first wave count has the best look and highest probability. 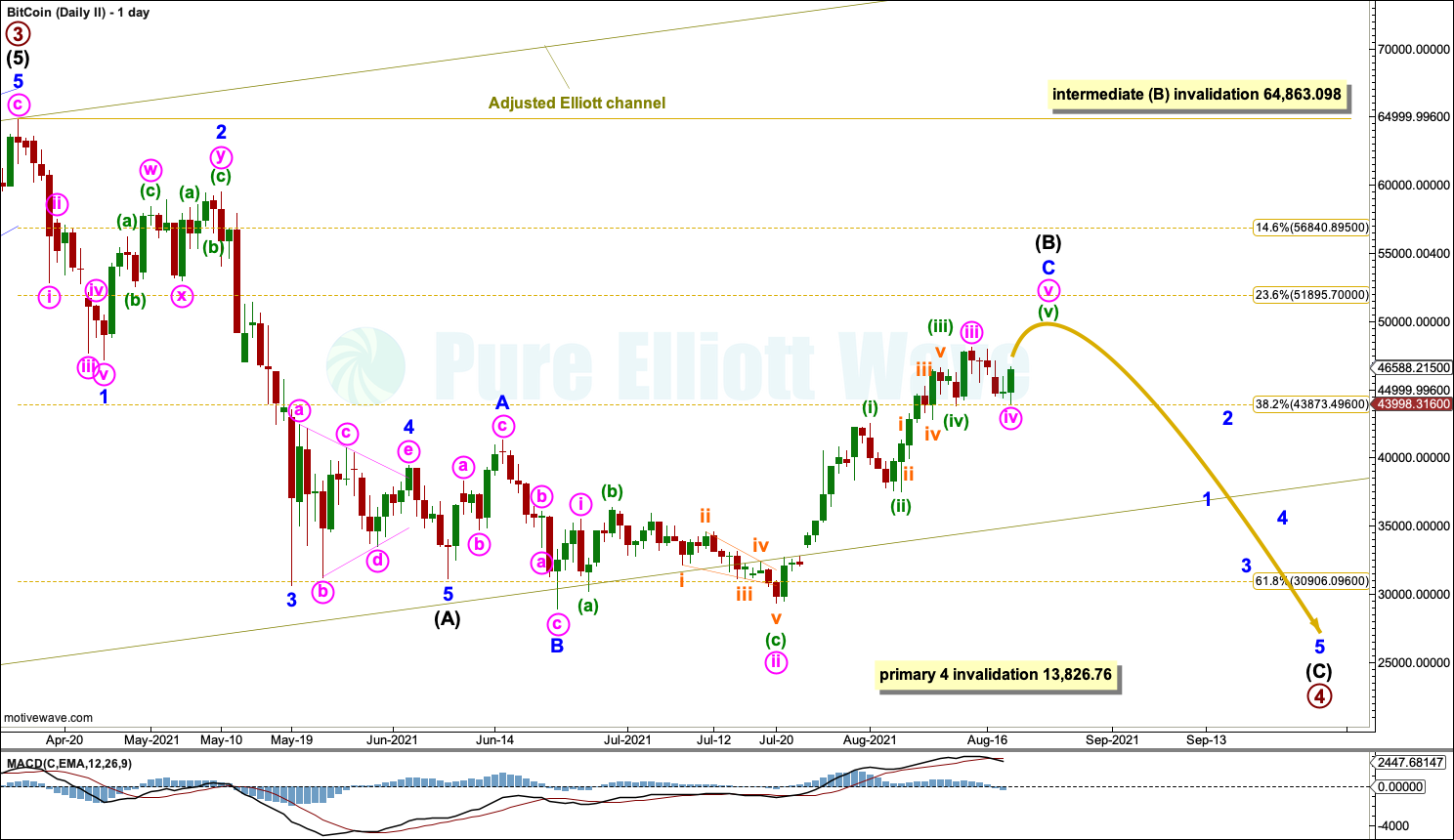 A new low below 28,893.621 would invalidate the first daily Elliott wave count and leave the second and third wave counts valid.

Primary wave 4 may subdivide as a single zigzag. Since primary wave 2 subdivided as a single zigzag, then this would provide no alternation in structure; however, alternation is a guideline and not a rule, and not always seen. A zigzag is the most common corrective structure by a wide margin, so this wave count must be considered as a possibility. 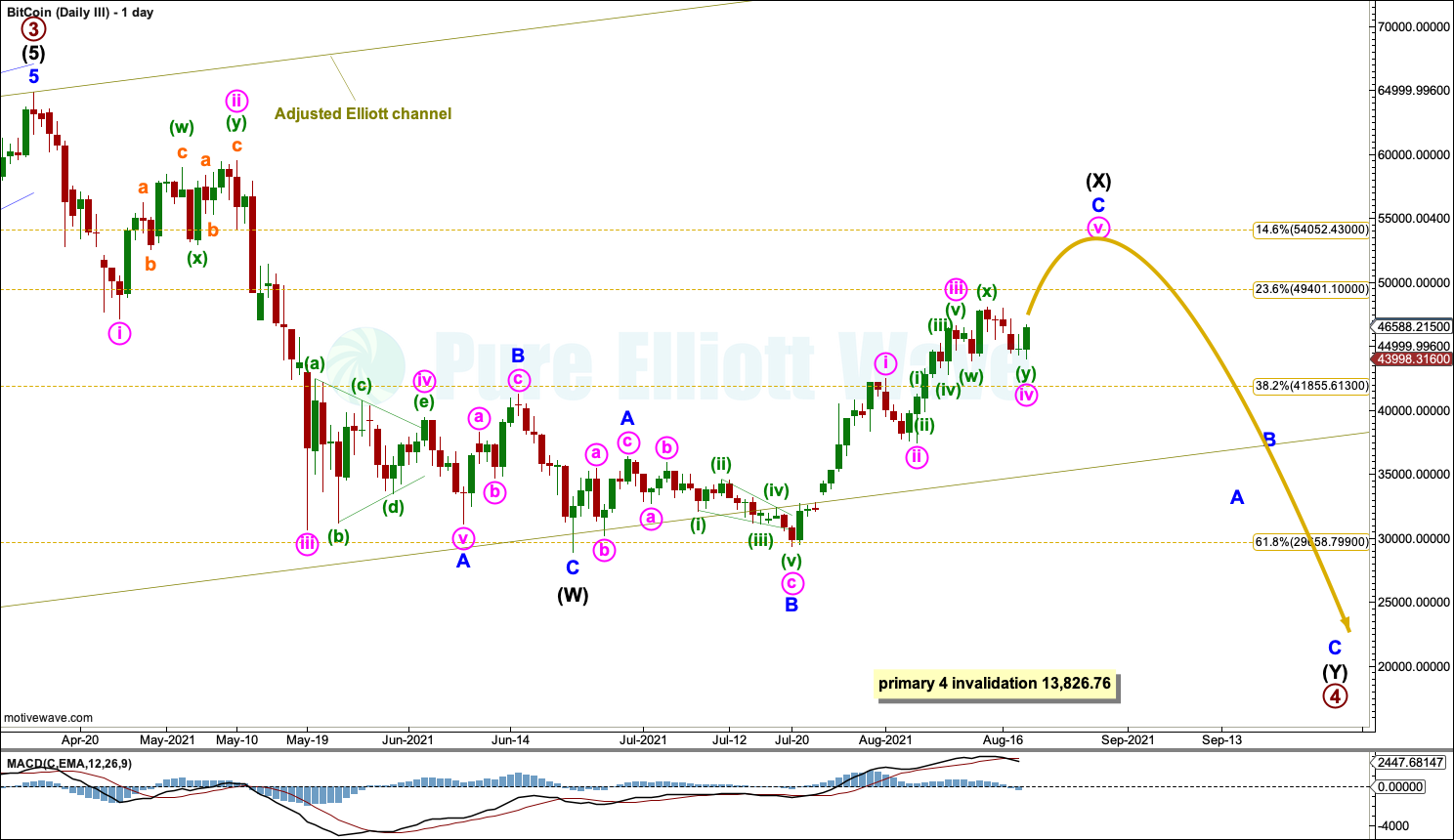 It is also possible that primary wave 4 may subdivide as a double zigzag.

Regular flats normally have C waves that are reasonably close to equal in length with their A waves, but minor wave C within intermediate wave (X) is now much longer than minor wave A. This does not look like a normal regular flat and the probability of this wave count is reduced. 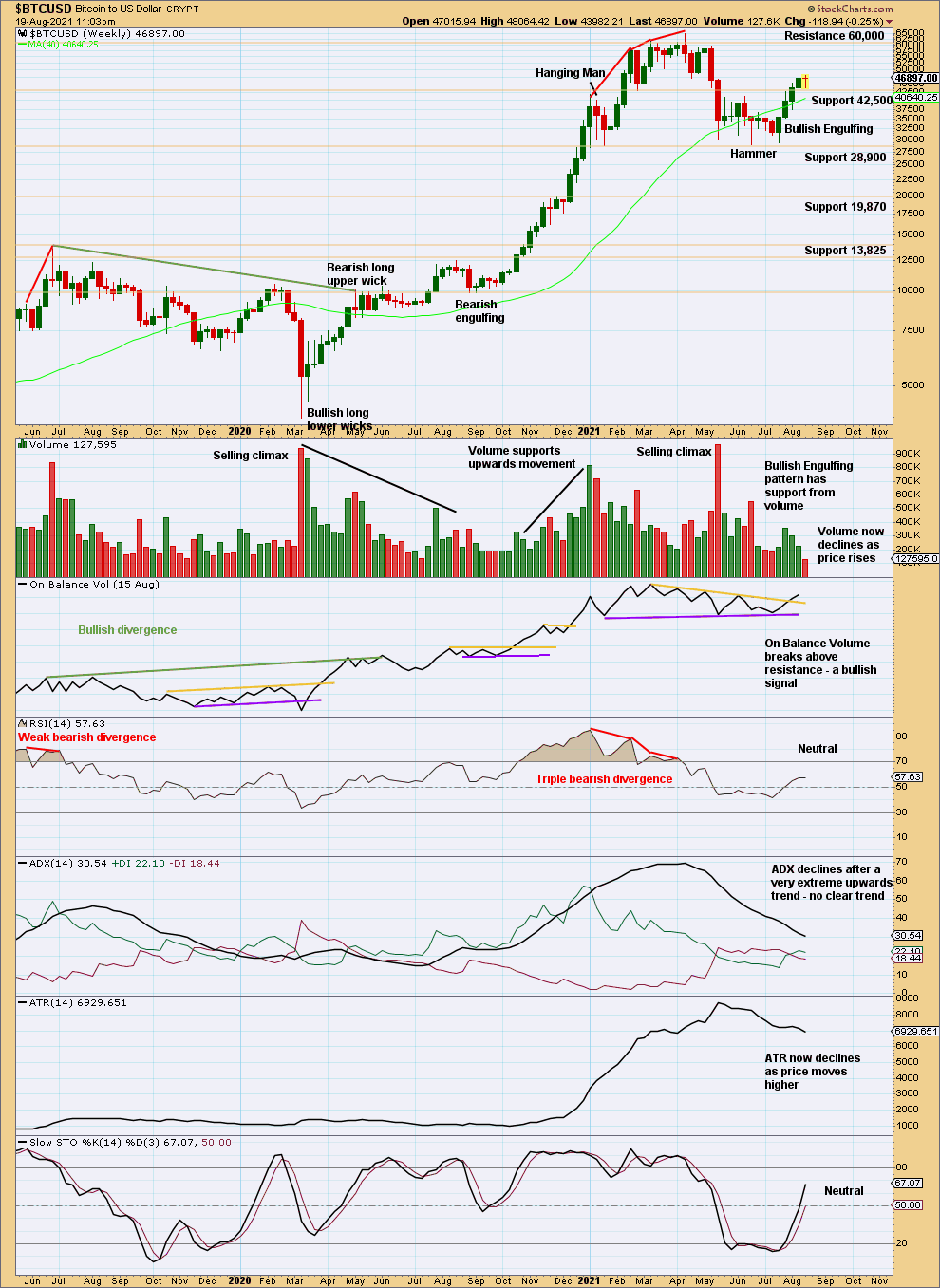 The prior upwards trend reached very extreme. Now support is holding strong about 28,900. Watch On Balance carefully for a signal soon.

On Balance Volume gives a bullish signal. Upwards movement may reasonably be expected to continue here to next resistance about 60,000, although there is a weaker cluster of resistance just below 60,000. 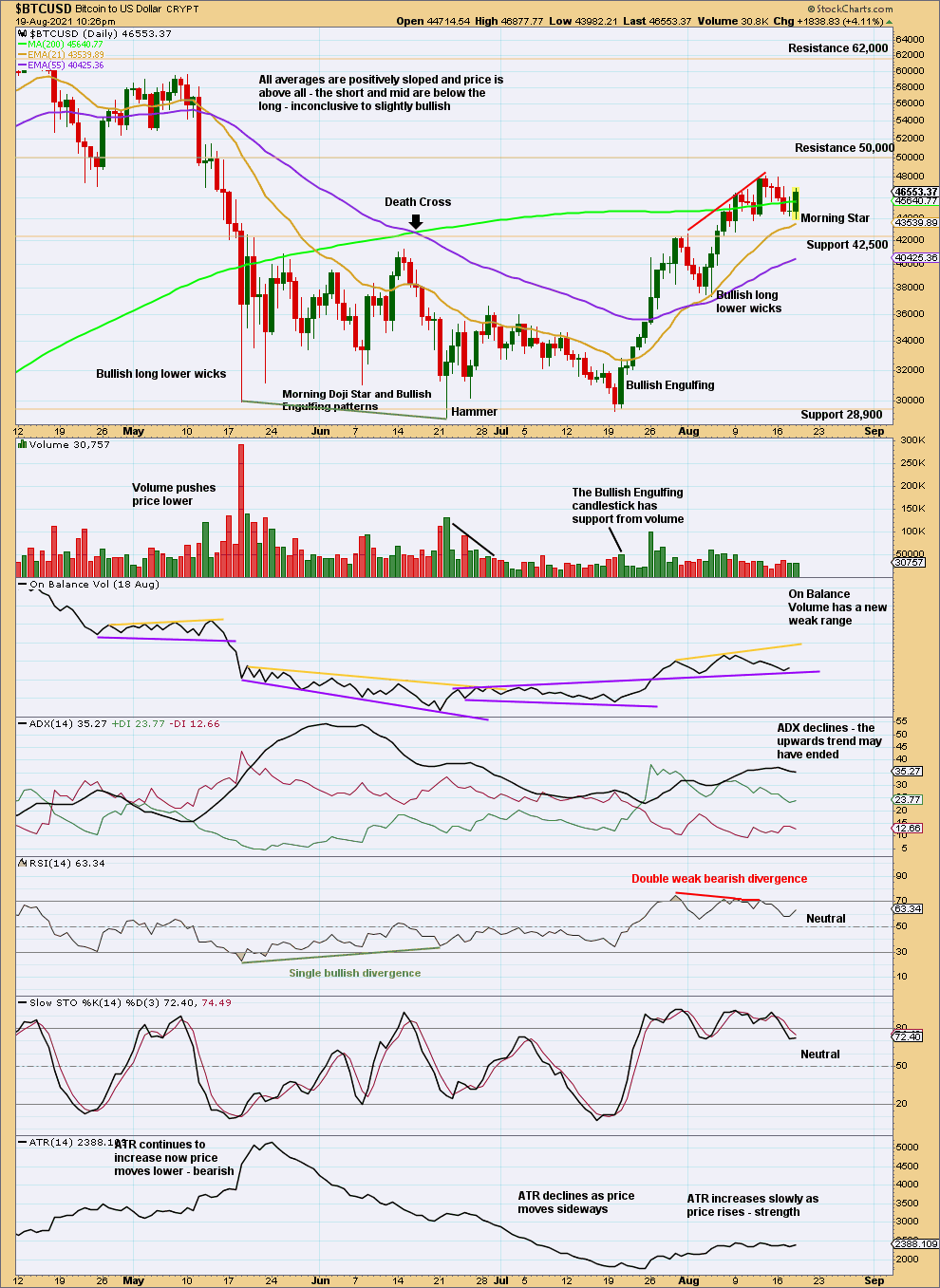 Bullish candlestick patterns appear at the last three lows, and long lower wicks appear at the first four. Support is strong about 28,900. Bullish divergence at the low of June 22, 2021, between price and RSI after RSI neared oversold, strongly suggests a low may be in for Bitcoin. This supports the first daily Elliott wave count.

There is plenty of room for price to continue higher here before conditions may become extreme enough to suggest the upwards trend may be over.

A small pullback may have been enough to resolve weak bearish divergence between price and RSI. Now a bullish candlestick pattern and support from volume, while On Balance Volume remains above support, suggest upwards movement ahead.

1. Invest only funds you can afford to lose.

2. Have an exit plan for both directions – where or when to take profit, and when to exit a losing investment.