Last analysis on the 16th of May expected a relatively brief and shallow fourth wave correction to be followed by possibly explosive upwards movement for a fifth wave.

Summary: For the short to mid term, look out for an explosive upwards movement. When 1-3 weeks of vertical movement are seen with some decline in volume on the last week, then look out for a sharp turn and a deep correction. If bearish divergence between price and RSI persists, then have more confidence in a reversal. 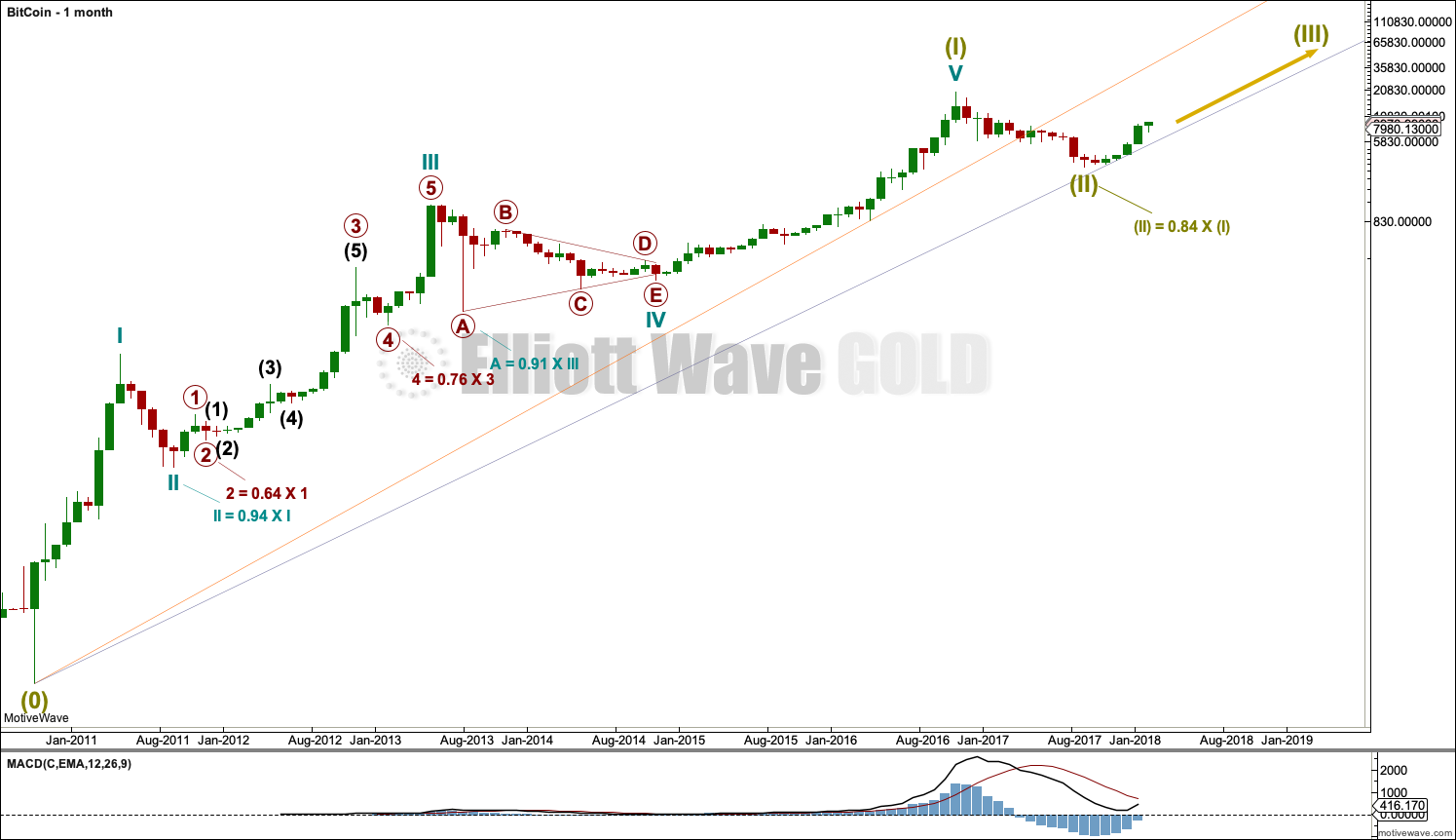 What is very clear from this chart is that Bitcoin forms classic bubbles. It has done so now several times and may now be doing so again. This looks like an even larger bubble than the Tulip Mania. So far each bubble has popped and Bitcoin has collapsed, to then thereafter form a new bubble. Each bubble is larger than the one prior; so if another Bitcoin bubble is forming, it may be expected to take price substantially above the all time high. 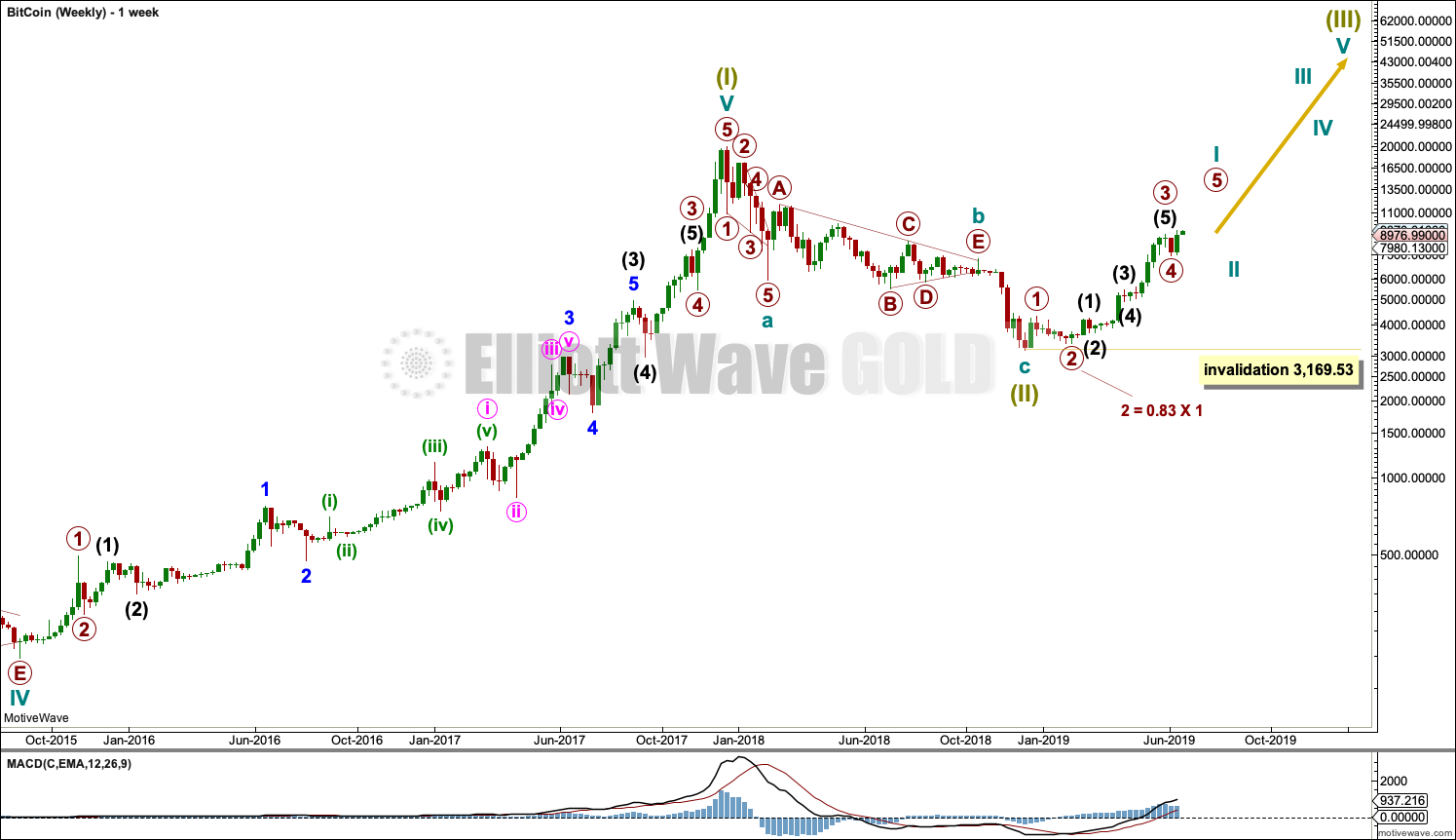 Super Cycle wave (II) may be a complete zigzag. 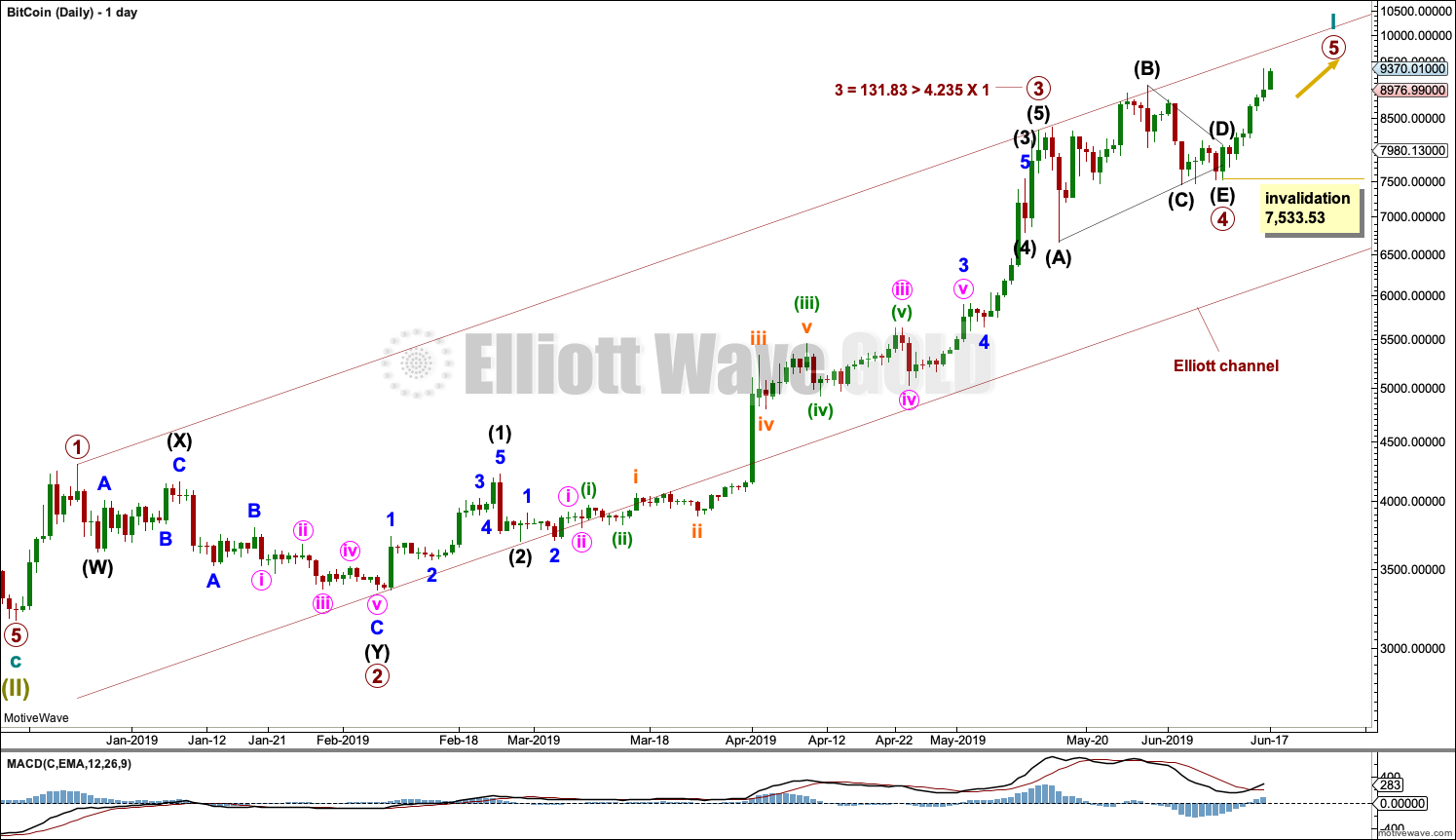 Bitcoin typically forms curved first wave impulses with time consuming and deep second wave corrections, then accelerates through to the end of its third waves, has brief and more shallow fourth wave corrections, and then finishes with explosive fifth waves. This is an extreme behaviour most typically seen in commodities.

Primary wave 5 may be expected to be explosive. This would be typical behaviour for this market.

Within primary wave 5, no second wave correction may move beyond its start below 7,533.53. 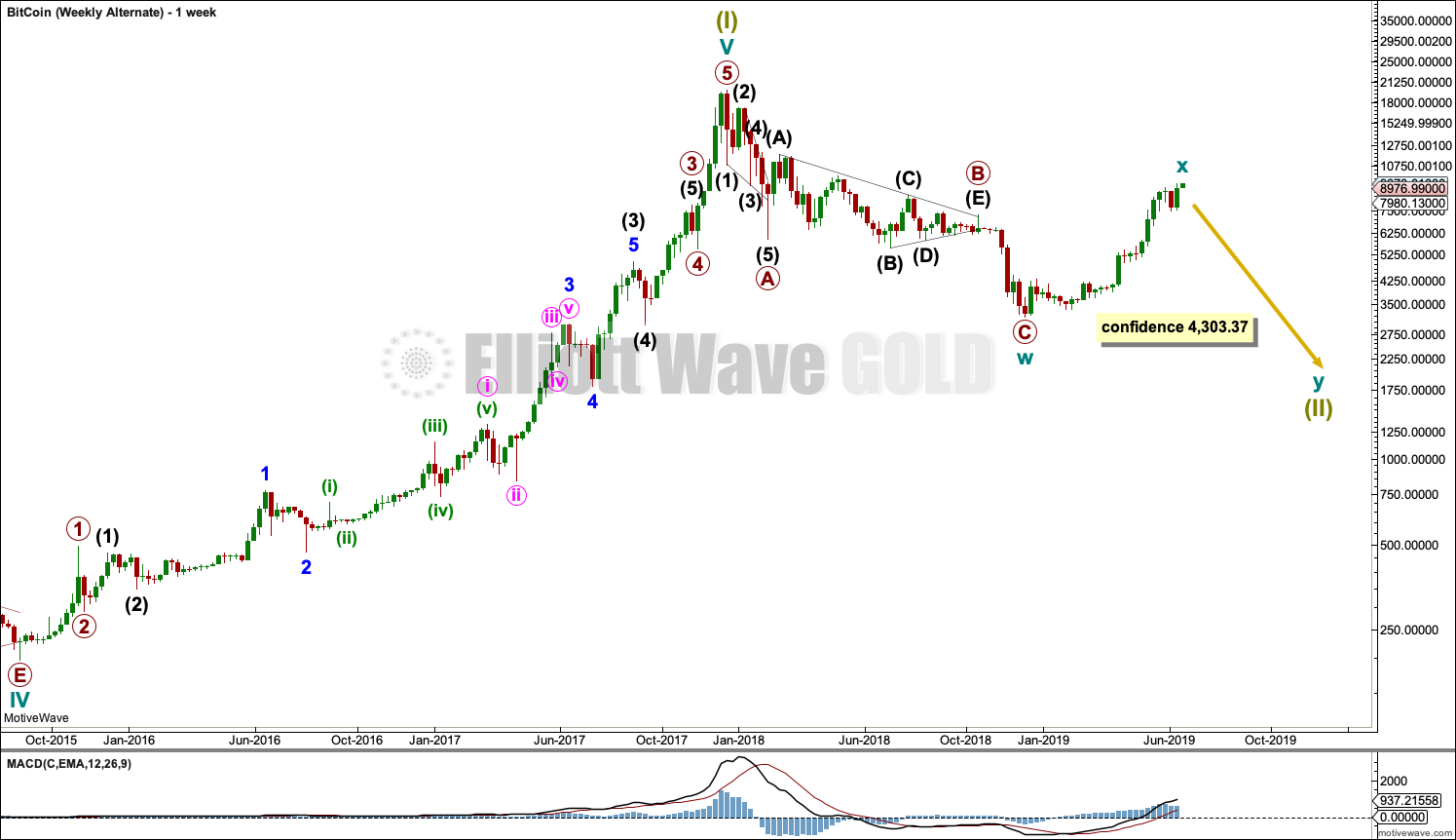 Within the double zigzag, cycle wave x may now be complete. Cycle wave y may begin.

The purpose of a second zigzag in a double is to deepen the correction when the first zigzag does not move price deep enough. To achieve this purpose cycle wave y may be expected to move reasonably below the end of cycle wave w at 3,169.53.

Within multiples, there is no rule stating a limit for X waves. There can be no Elliott wave rule to apply to cycle wave x to determine when this wave count would be invalidated. 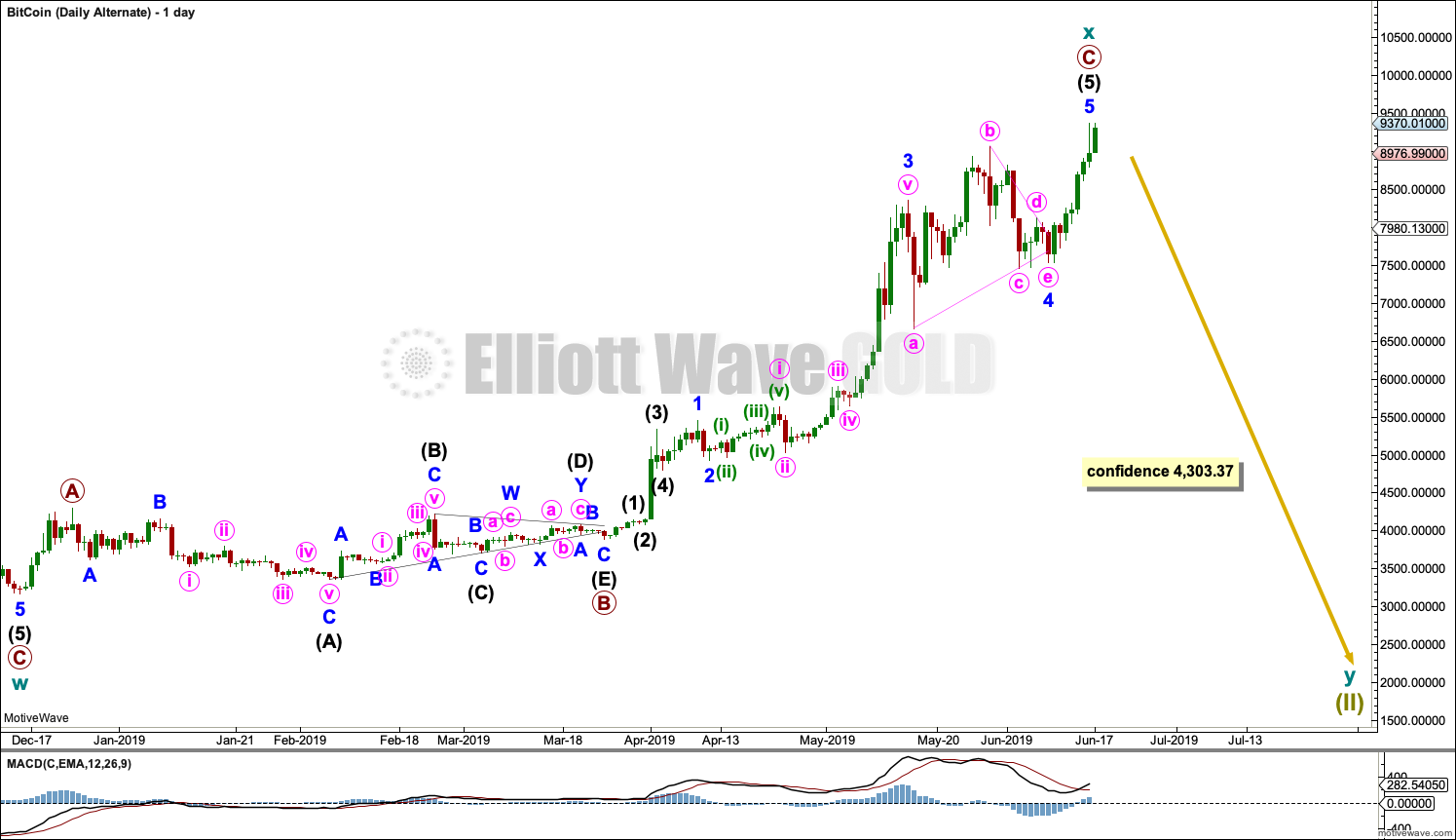 Cycle wave x must subdivide as a corrective structure and would most likely be a zigzag. It will not fit as a triangle, flat or combination, and so it is labelled as a zigzag.

This wave count now has a very serious problem with behaviour which does not fit this market. For cycle wave x to be counted as a zigzag, there is now gross disproportion within primary wave C between minor waves 2 and 4. Minor wave 4 is much more time consuming at 24 sessions to minor wave 2 at only 2 sessions. This market typically exhibits disproportionate fourth and second waves, but with the fourth wave more brief than the second.

This wave count will now be discarded at this time based upon exceptionally low probability. This adds a little confidence to the main wave count and the idea that Bitcoin may be forming a new bubble. 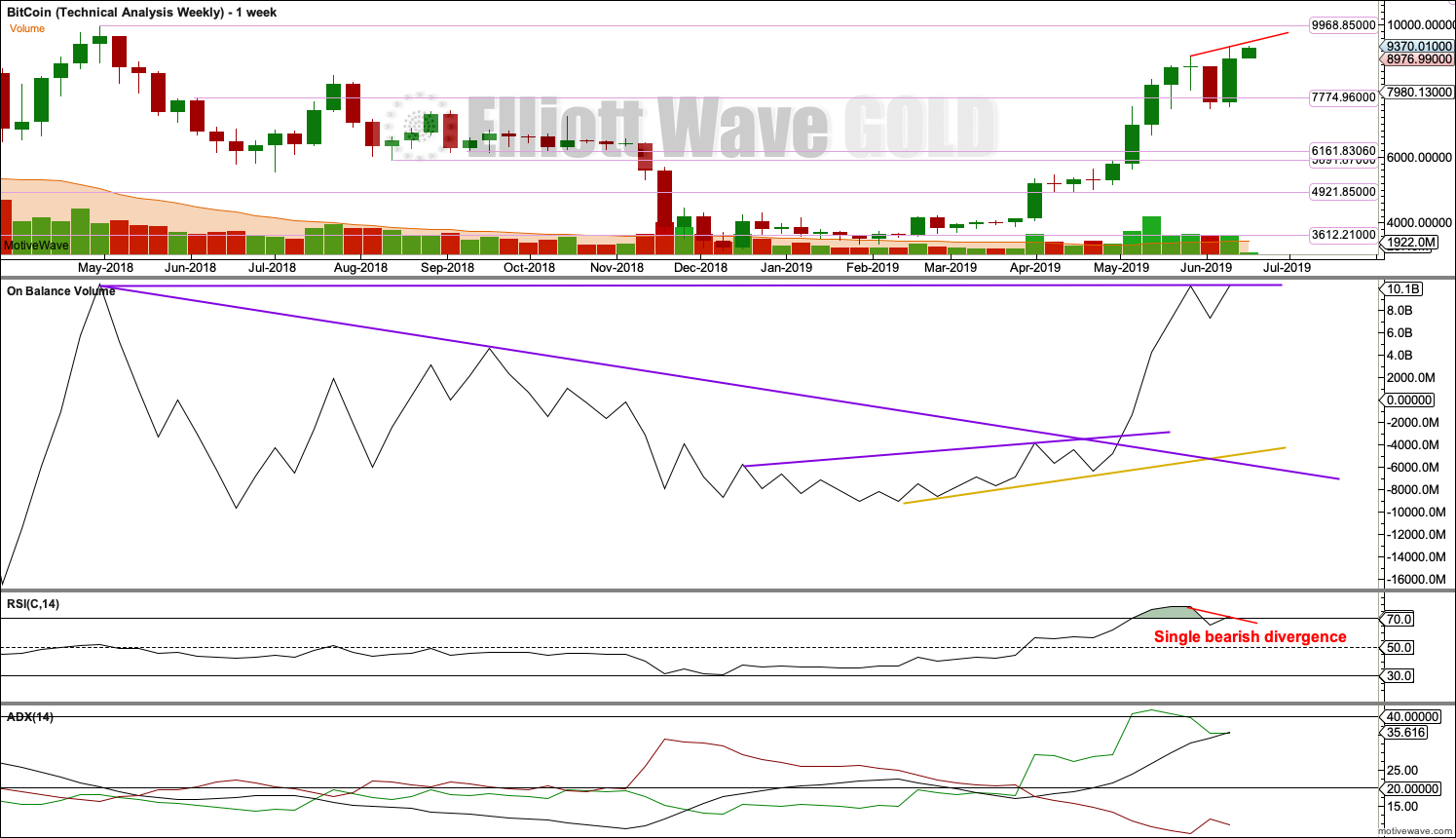 The last vertical rise in price up to the week beginning 26th May 2019 has been interspaced by a brief correction and now price is rising again. Look now for a short 2-3 weeks of vertical rise. If bearish divergence between price and RSI persists, then be alert for a sharp reversal and a large fall in price after the expected vertical rise. 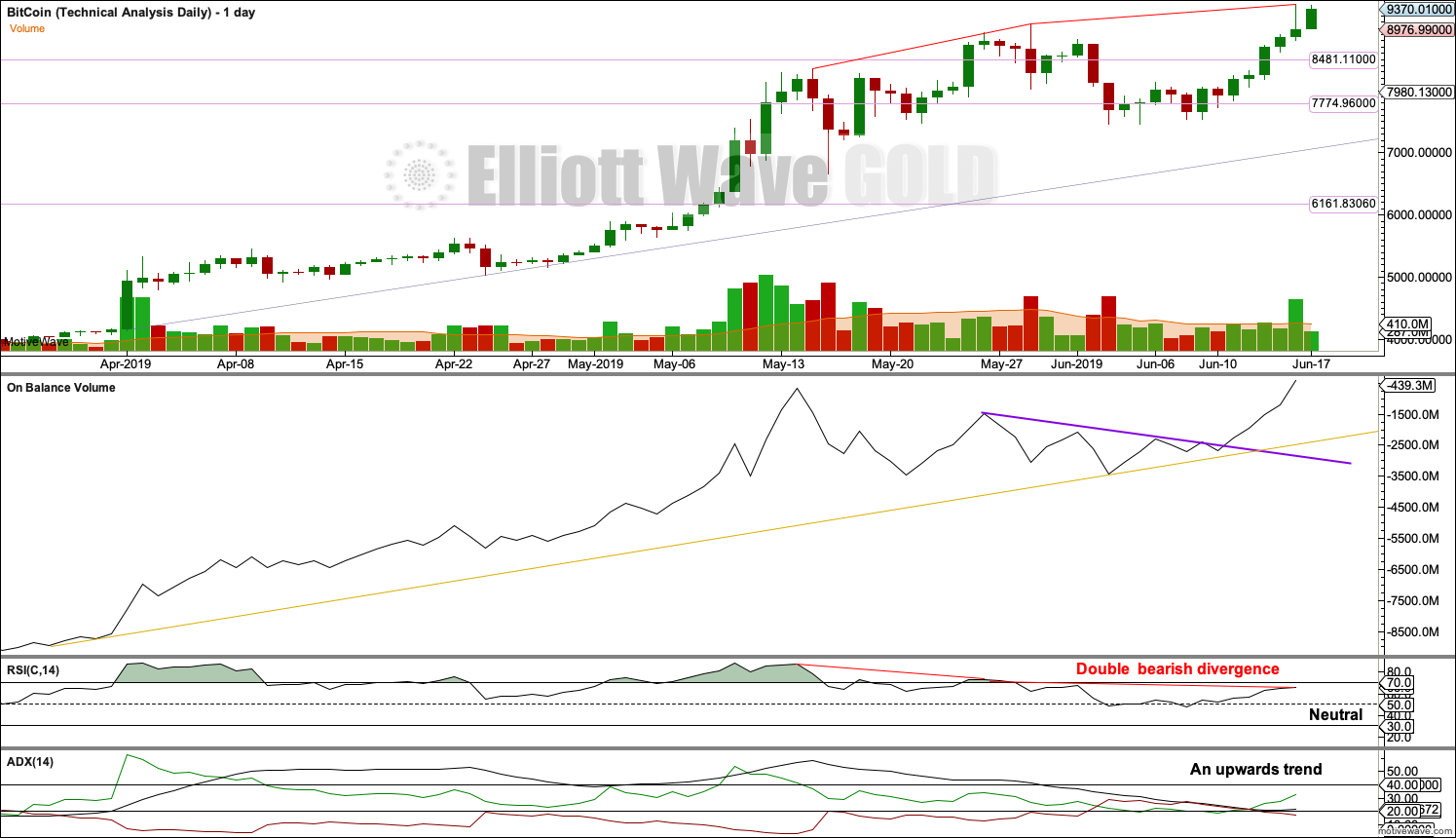 A support line is drawn for price. While price remains above this line, assume the trend remains upwards.

Bearish divergence between price and RSI is a strong warning that the current rise in price may end sooner rather than later. However, this divergence on its own is not a signal and sometimes can simply disappear.