Last analysis on the 10th of July expected a continuation of downwards movement for Bitcoin. Bitcoin has moved sideways since that date.

Focus of analysis from this point onwards is on identifying a potential buying opportunity for Bitcoin.

Today’s Bitcoin analysis is available to everyone.

At its end, this deep pullback may offer a good buying opportunity for Bitcoin.

At this stage, conditions are not yet oversold. The short-term volume profile favours a bearish outlook and the corrective Elliott wave structure is incomplete. 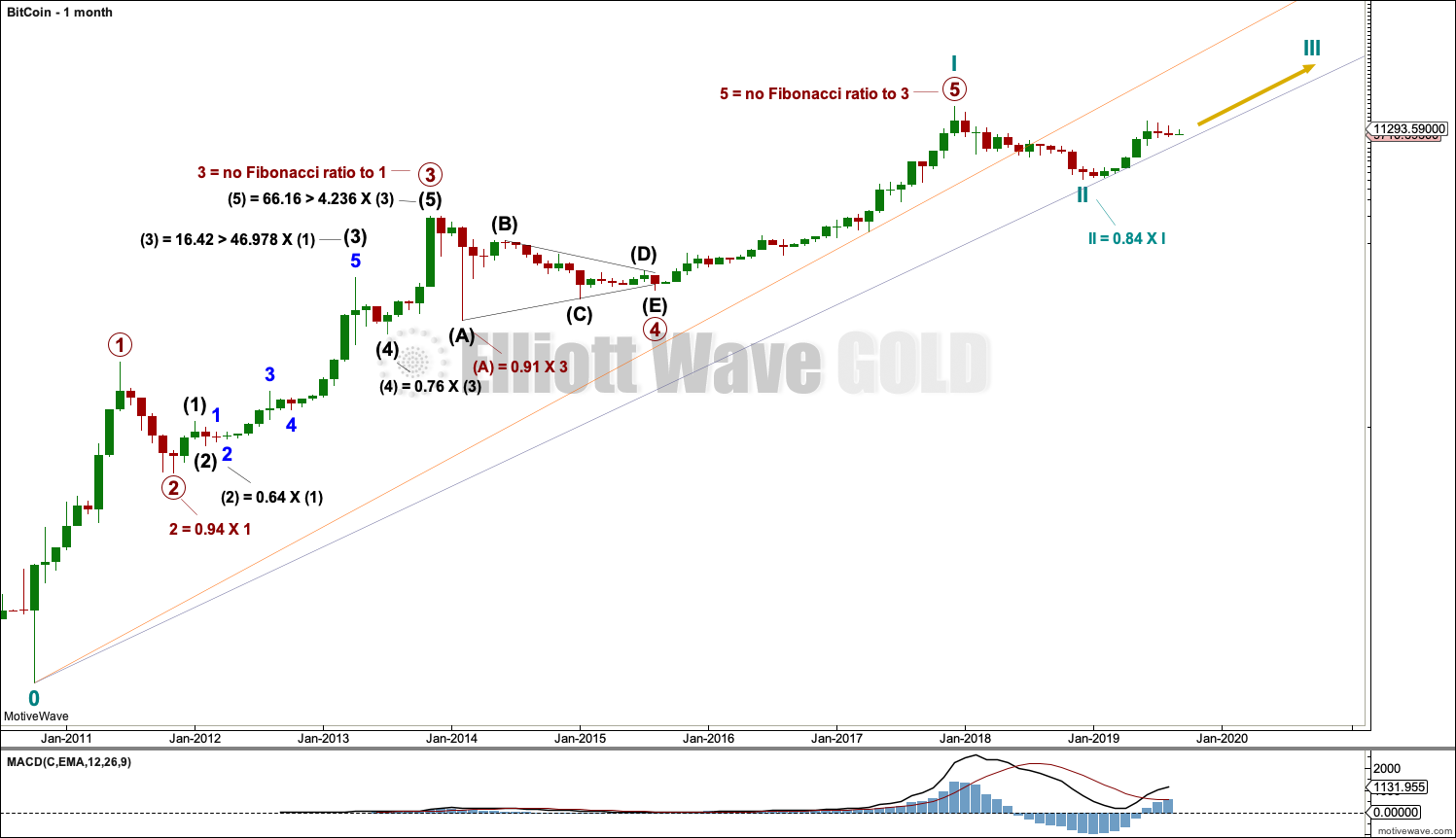 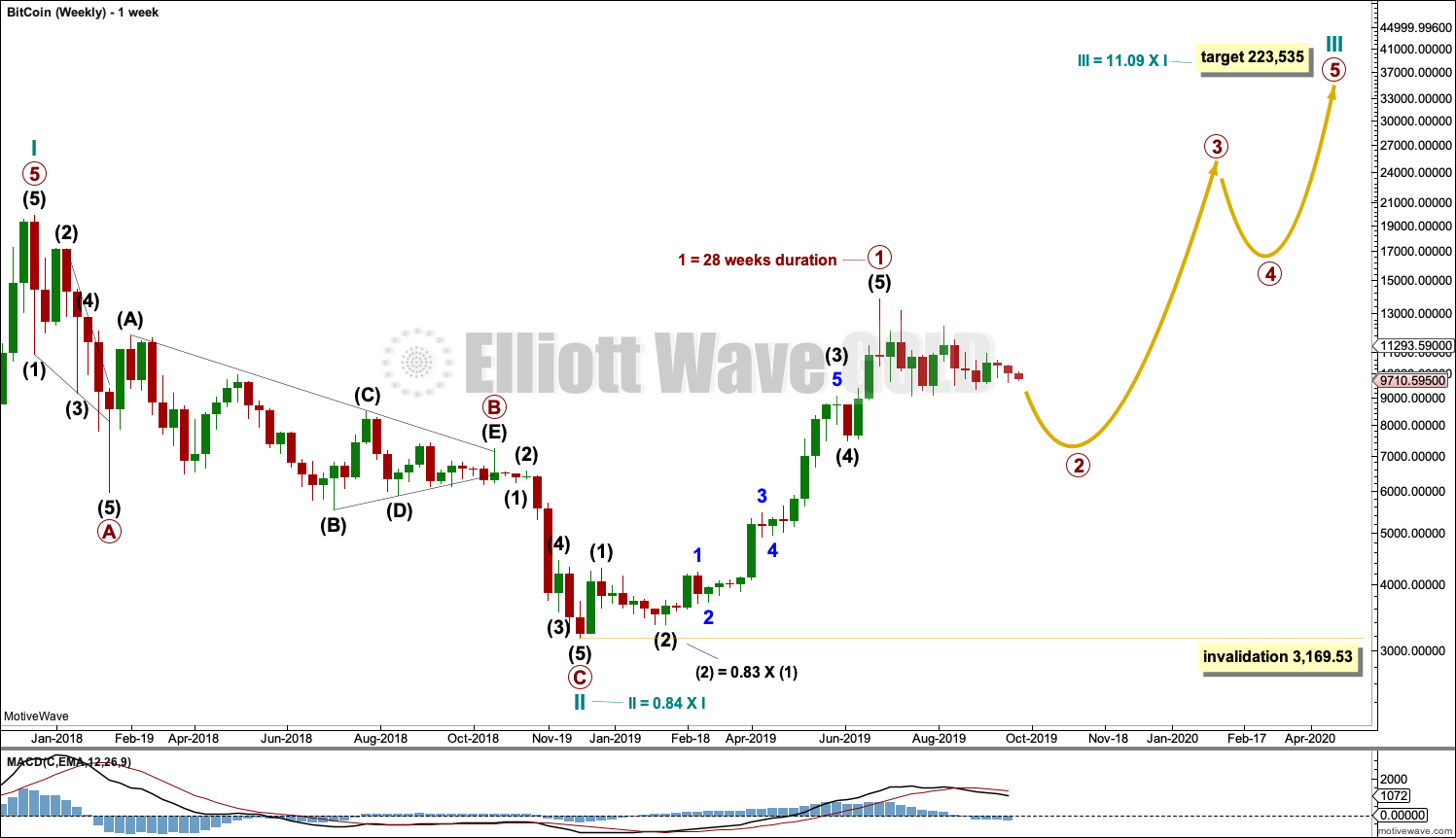 Cycle wave I lasted 7.2 years and cycle wave II may have been over within just under one year. It would be reasonable to expect cycle wave III to last about 7 years, possibly a Fibonacci 8 or 13 years. At this stage, it may be now within its ninth month.

Cycle wave III must unfold as a simple five wave impulse, and within this impulse there should be two large corrections for primary waves 2 and 4. So far primary wave 1 may be complete. Primary wave 2 may now continue as a three wave structure downwards to possibly last about 17 weeks in duration if it is 0.618 the duration of primary wave 1. So far it has lasted 13 weeks.

The range of the depth of corrections for second waves in minor, intermediate or primary degree positions is from 0.35 to 0.94, with the average at 0.68.

The 0.618 Fibonacci ratio would be a reasonable target for this primary degree second wave. 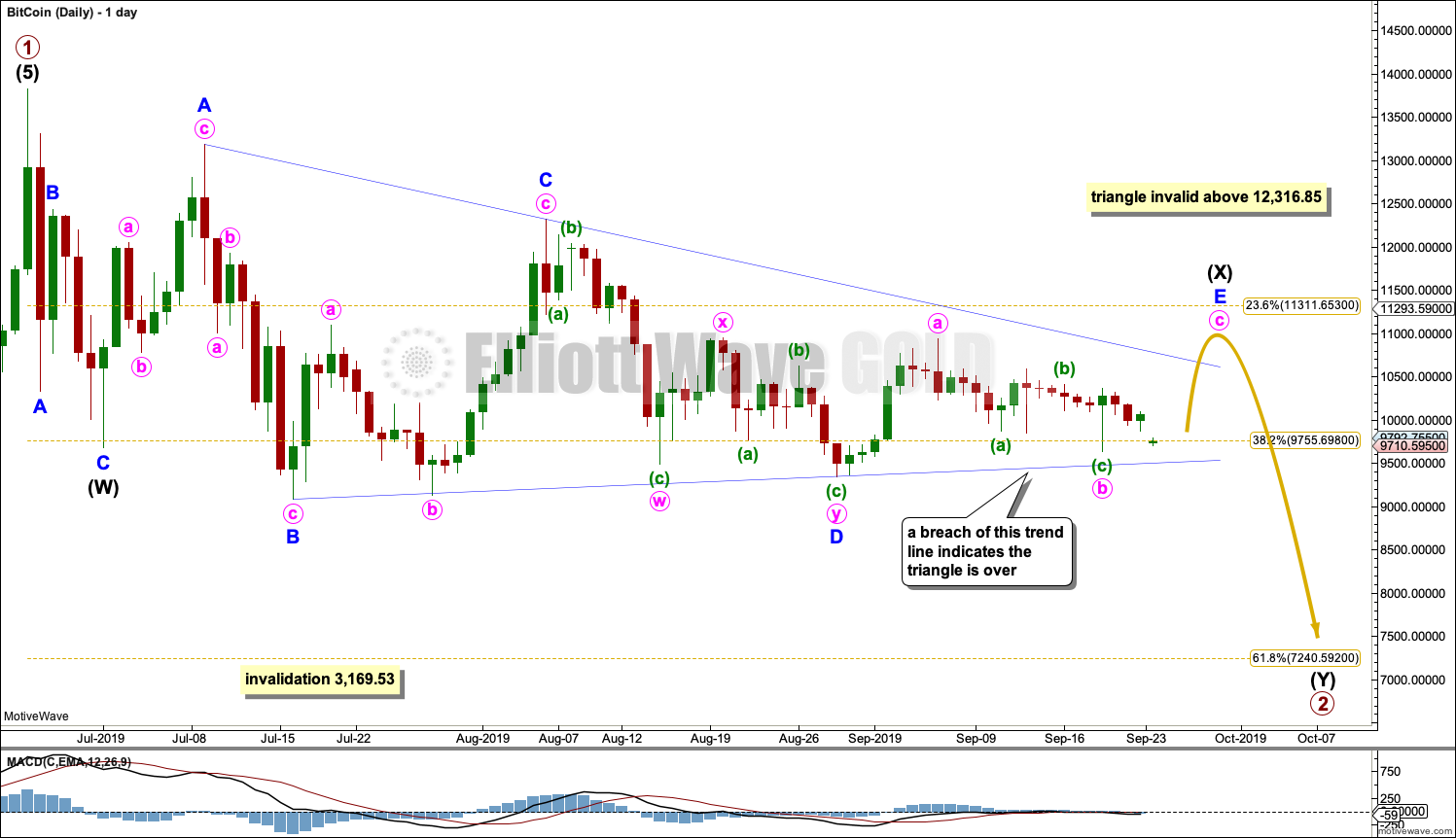 In the price history of Bitcoin to date second waves of all degrees subdivide (in order of frequency) as zigzags (10), double zigzags (7), flats (3) and combinations (only 1 example).

At this stage, a zigzag may be eliminated for primary wave 2. The first wave down labelled intermediate wave (W) subdivides as a three and not a five.

A double zigzag is the second most common structure for a second wave, so this is what it may be unfolding as. The second zigzag in the double labelled intermediate wave (Y) may bring price down close to the 0.618 Fibonacci ratio.

At this stage, the degree of labelling within primary wave 2 looks right and shall now be left as is with some confidence.

Sideways movement of the last few weeks now looks like a triangle may be completing, which may be a running contracting triangle that is labelled intermediate wave (X). The lower B-D trend line should offer strong support while the triangle is incomplete. Minor wave E may end with an overshoot of the upper A-C trend line.

A downwards breakout to new lows would be expected for intermediate wave (Y) when the triangle is complete.

In terms of duration expected for primary wave 2, the price history of Bitcoin shows that second waves at primary or cycle degree were 0.67 and 0.14 the duration of their counterpart first waves. Here, primary wave 1 lasted 192 sessions and primary wave 2 may last 0.618 (119 sessions). So far it has lasted 89 sessions. 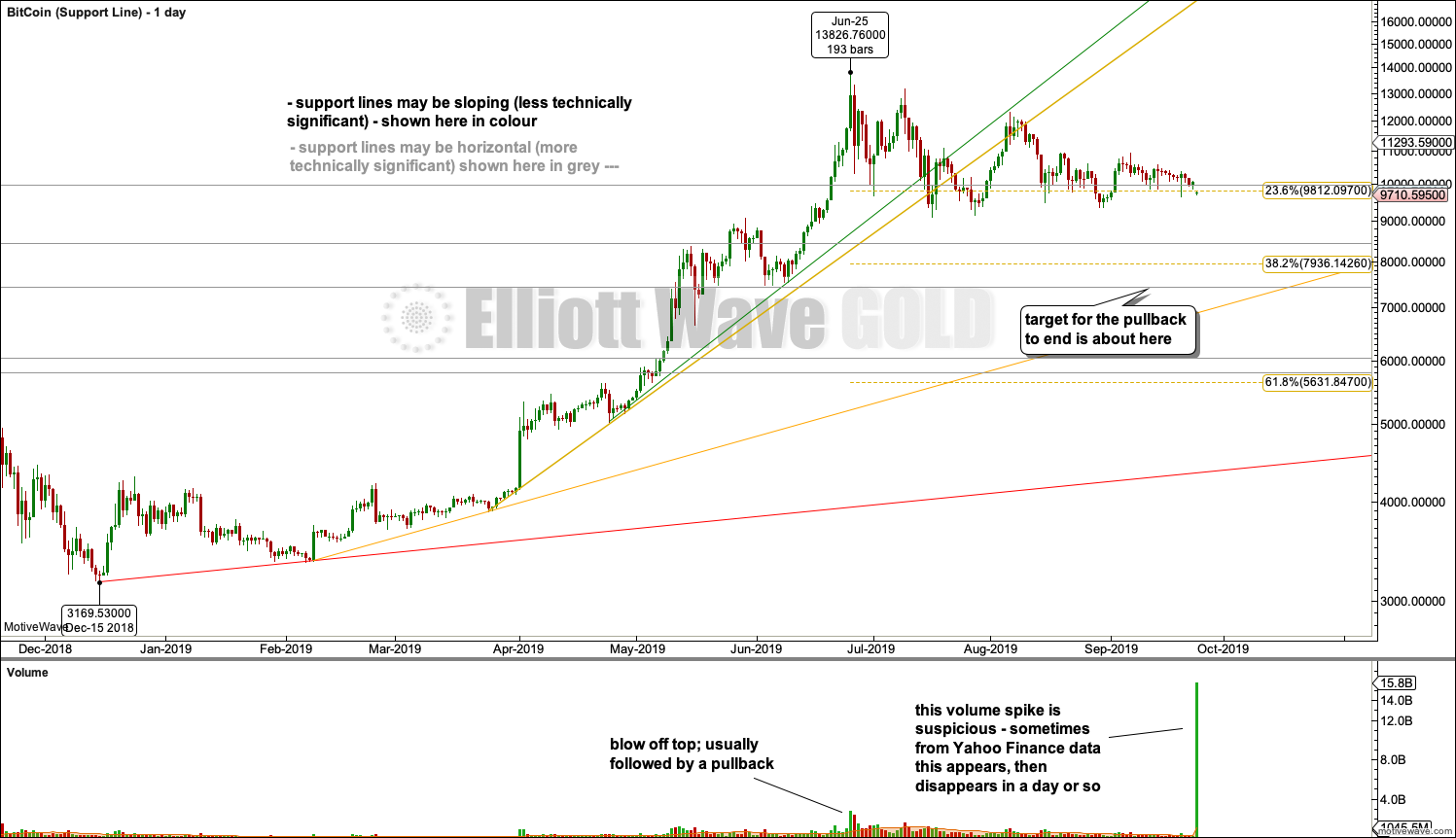 This daily chart is on a semi-log scale. This is the correct scale to view sloping support and resistance.

In Bitcoin’s price history both prior second waves at primary and cycle degree have breached a support line, which contained the first wave of the same degree. This is normal and to be expected.

Four potential support lines for the current primary wave 1 are drawn. The lowest in red looks unlikely to be breached by the current pullback. The highest in green and yellow have been breached. 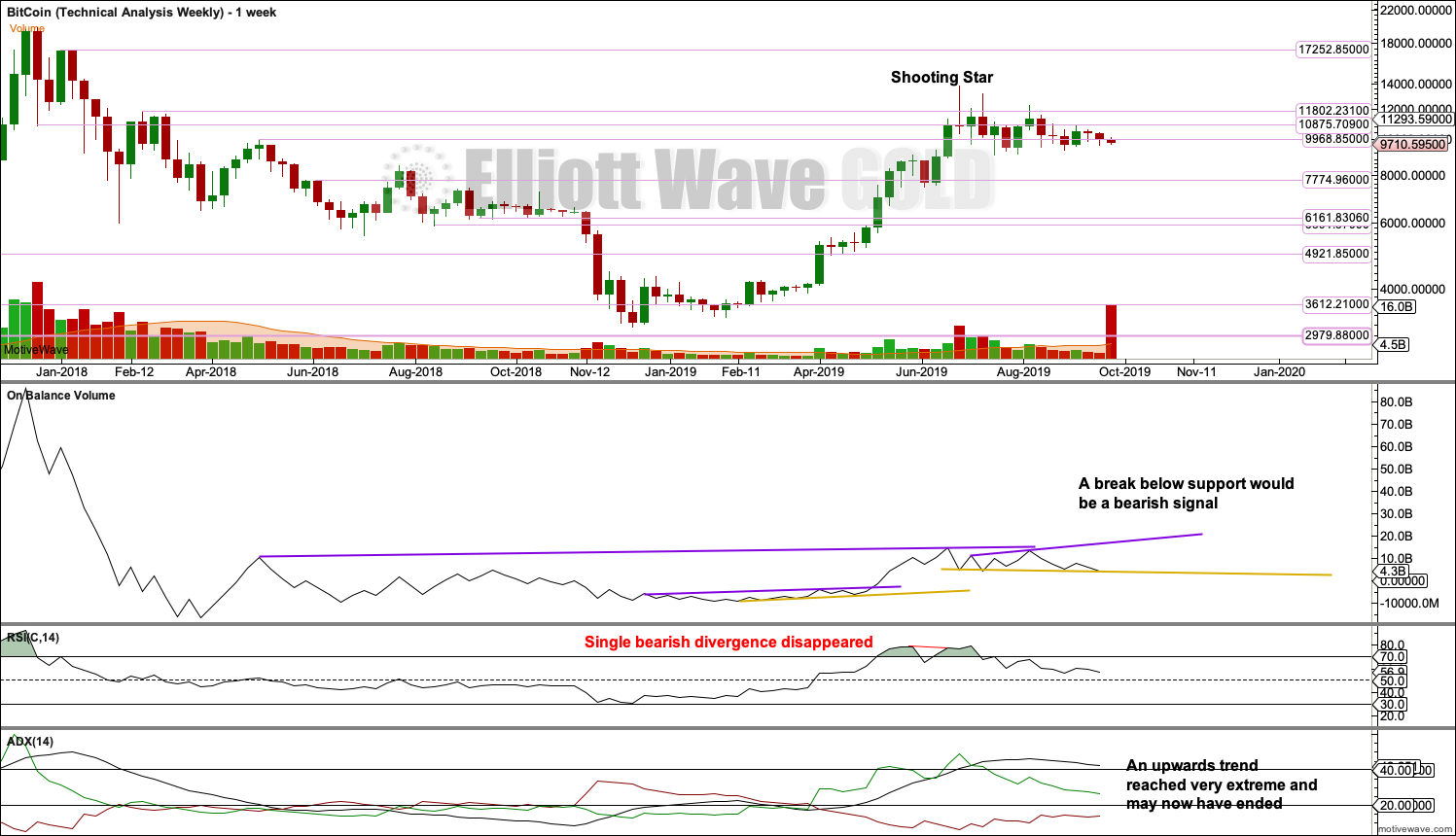 The last vertical rise now exhibits enough of the points looked for to have some confidence that Bitcoin may have found an interim top: vertical movement for three weeks, a volume spike on the last week, and a very bearish long upper wick on the candlestick at the high, although this is not a candlestick reversal pattern. 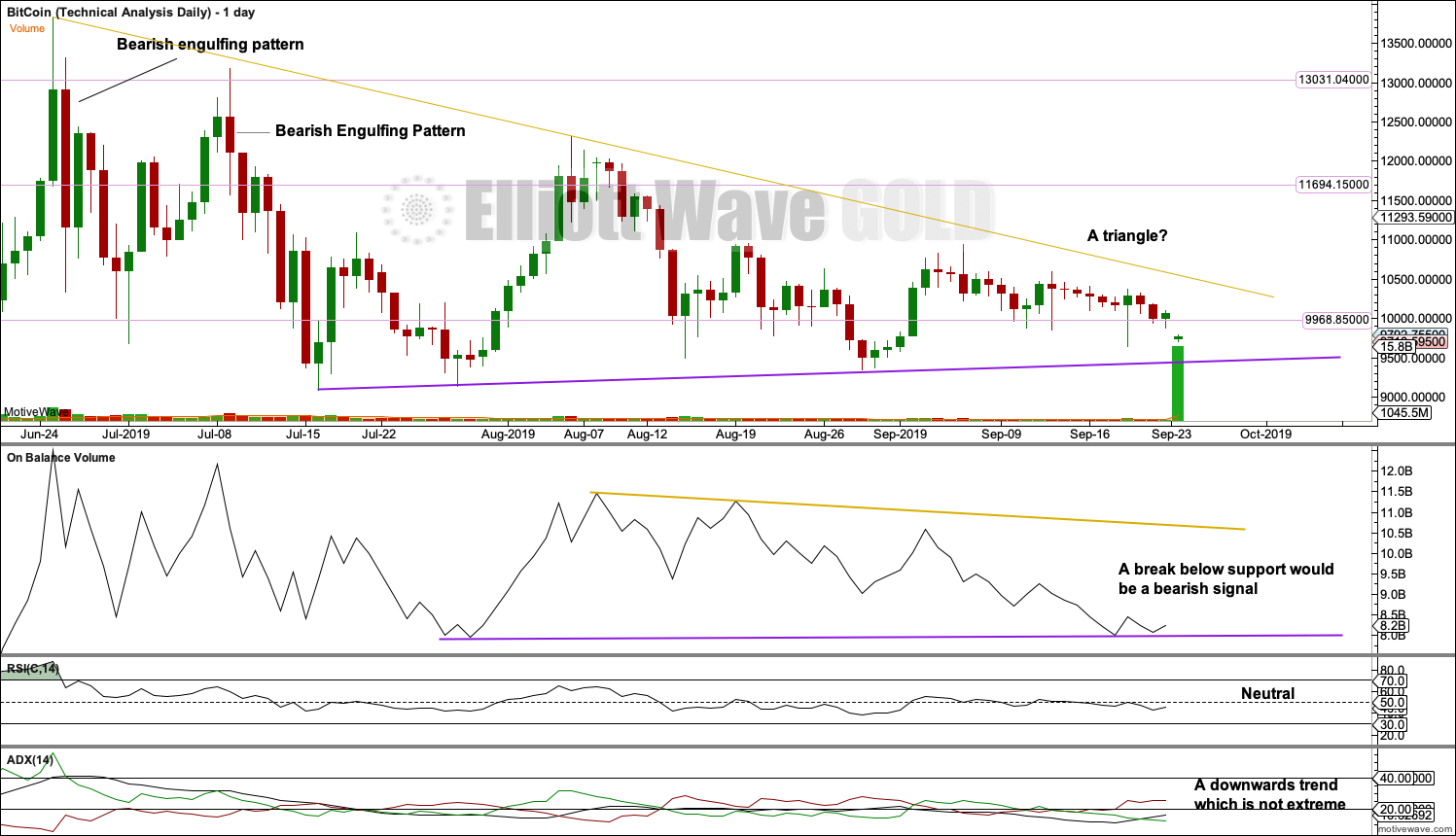 Support levels are noted as possible lows for the next expected deep pullback.

Currently, RSI has not yet reached oversold and ADX does not indicate a trend change. If the Elliott wave count is correct, then the current pullback has a long way to go.

Currently, a triangle may be completing. While Elliott wave triangles are always continuation patterns, classic triangles may be either continuation or reversal patterns. Support is noted in purple. Resistance is noted in gold. Watch for a breakout and then a backtest.