In last analysis on October 13th, the main Elliott wave count expected a pullback to continue. This was discarded above 12,359.057 in favour of a bullish alternate wave count, which expected price to keep going up.

Summary: Overall, the upwards trend may continue towards new all time highs. There may be strong resistance along the way up at the all time high at 19,870, where a pullback may be initiated.

For the short term, Bitcoin looks vulnerable to a pullback. If a bearish candlestick pattern develops on the daily chart, then this signal should be taken seriously. Refer to the daily technical analysis chart for support lines. 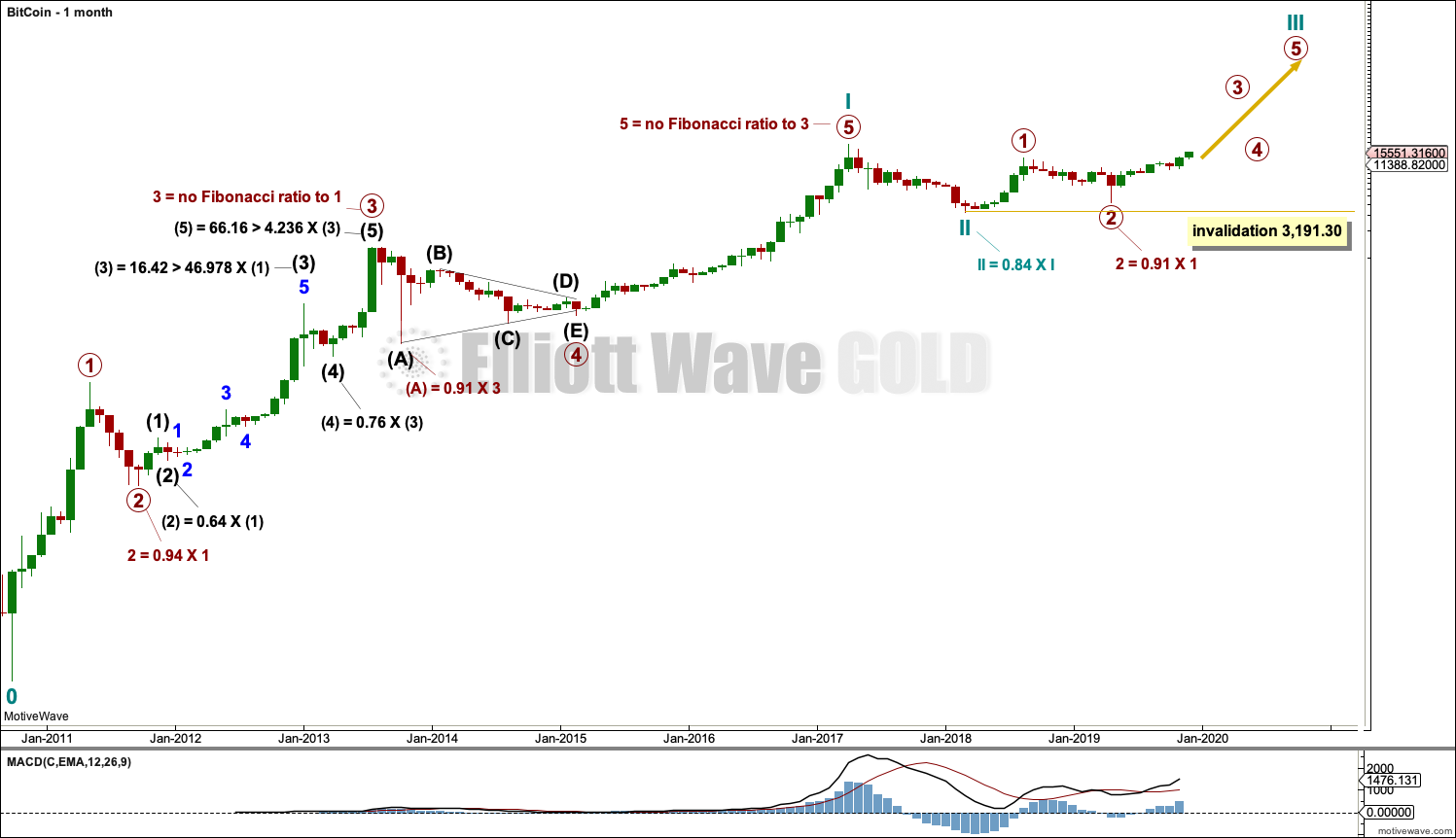 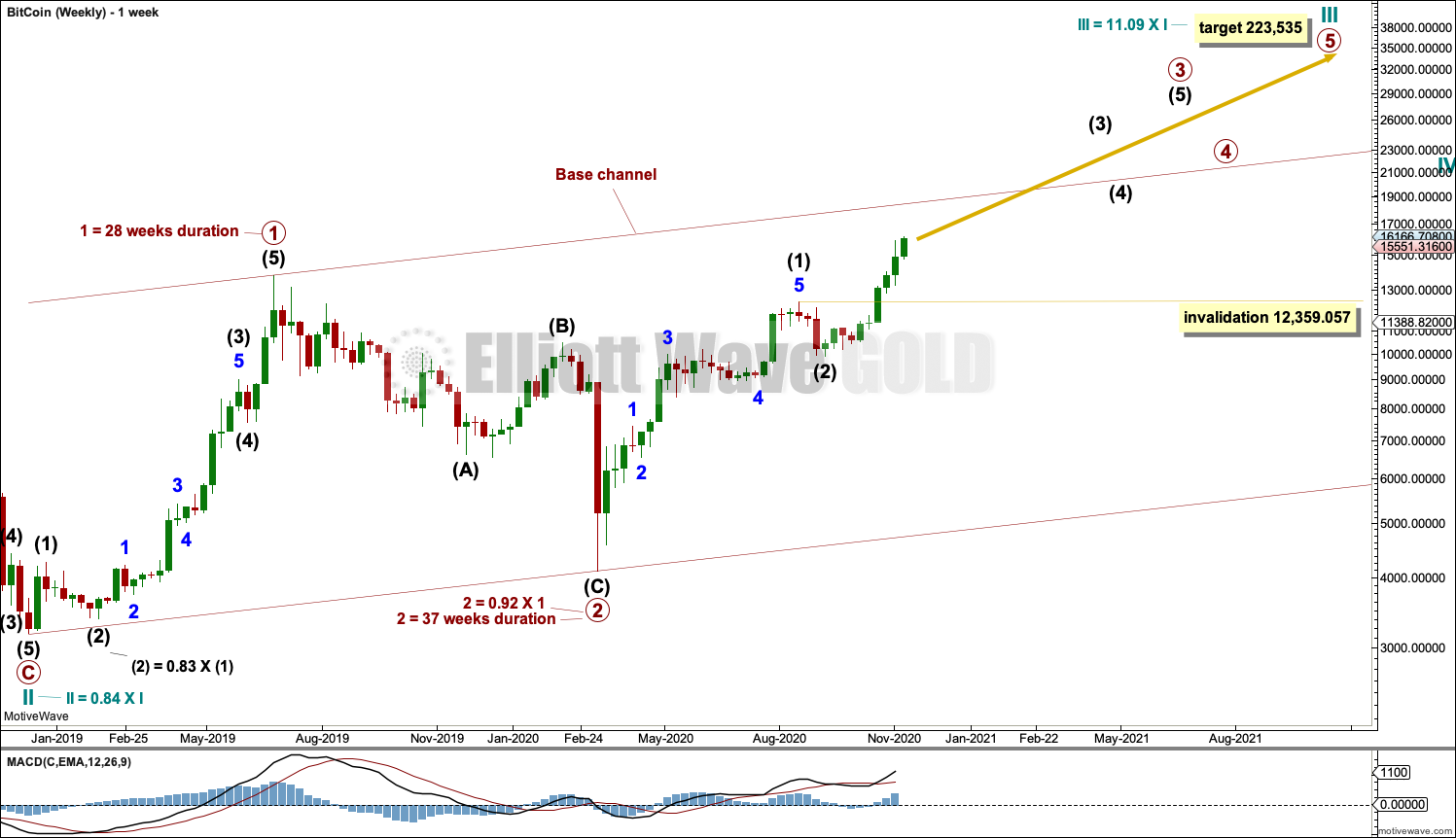 Cycle wave I lasted 7.2 years and cycle wave II may have been over within just under one year. It would be reasonable to expect cycle wave III to last about 7 years, or possibly a Fibonacci 8 or 13 years. At this stage, it may be now within its 23rd month.

Cycle wave III must unfold as a simple five wave impulse, and within this impulse there should be two large corrections for primary waves 2 and 4. It is possible that primary wave 2 could be complete and the main wave count now views it as so. If it is complete, primary wave 2 would be a normal depth of primary wave 1 and still in proportion to primary wave 1 in terms of duration. Primary wave 2 looks like an obvious three wave structure.

If this wave count is correct, then a third wave up at two large degrees may be underway and may develop further strength. Classic technical analysis will again be used to identify the next major high in place. The target calculated is provisional; if it is wrong, the target may not be high enough. All of my calculated targets in the run up to the all time high in December 2017 were too low by a wide margin. 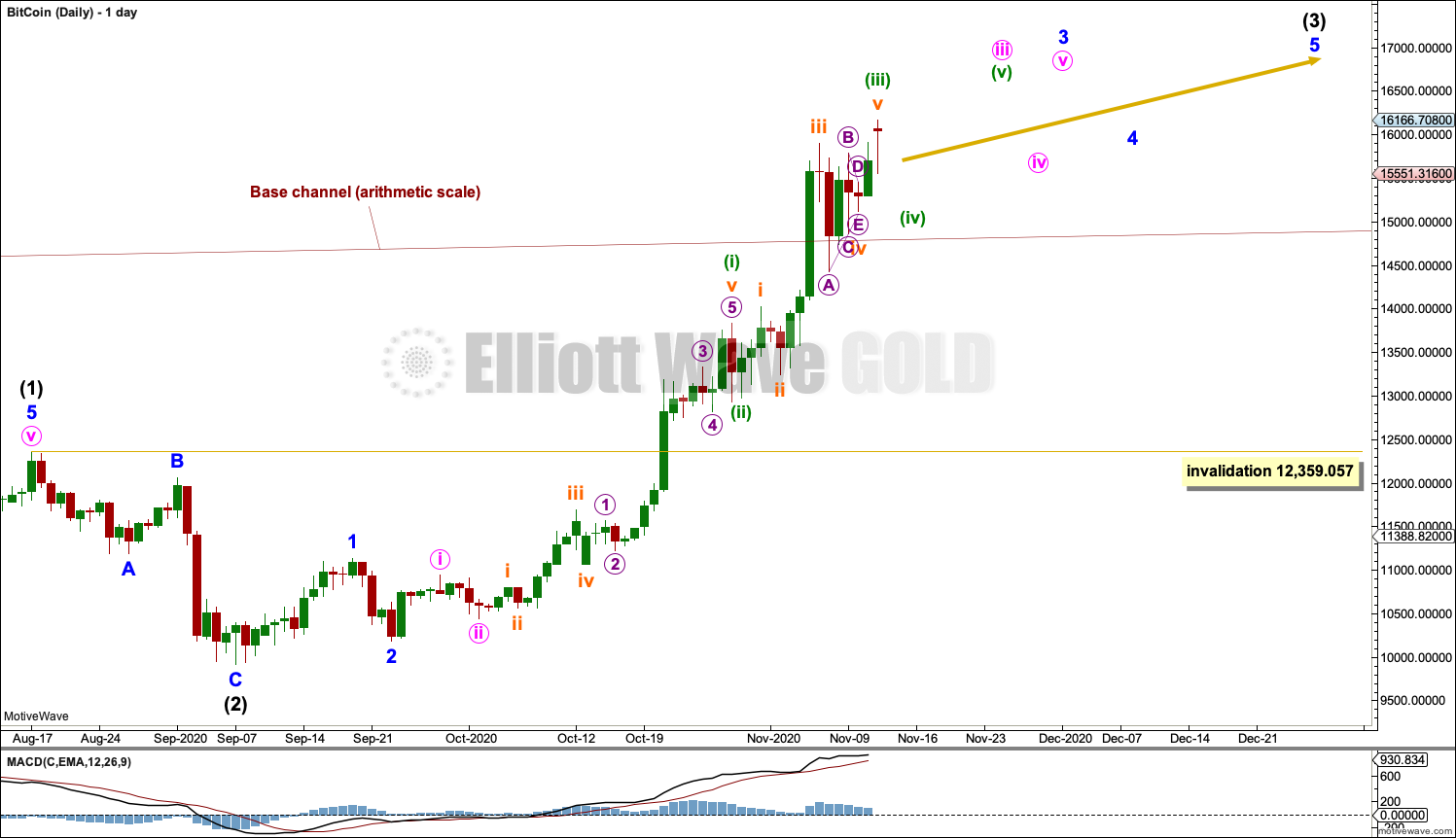 The main daily chart wave count focusses on the middle of primary wave 3.

Intermediate wave (3) may only subdivide as an impulse.

Bitcoin typically exhibits blow off tops along the way up (it may form several) and each may be followed by a brief and shallow correction as a third wave nears its end. Any one of minuette wave (v), minute wave v or minor wave 5 may form blow off tops. Each corresponding fourth wave may not move into its first wave price territory. 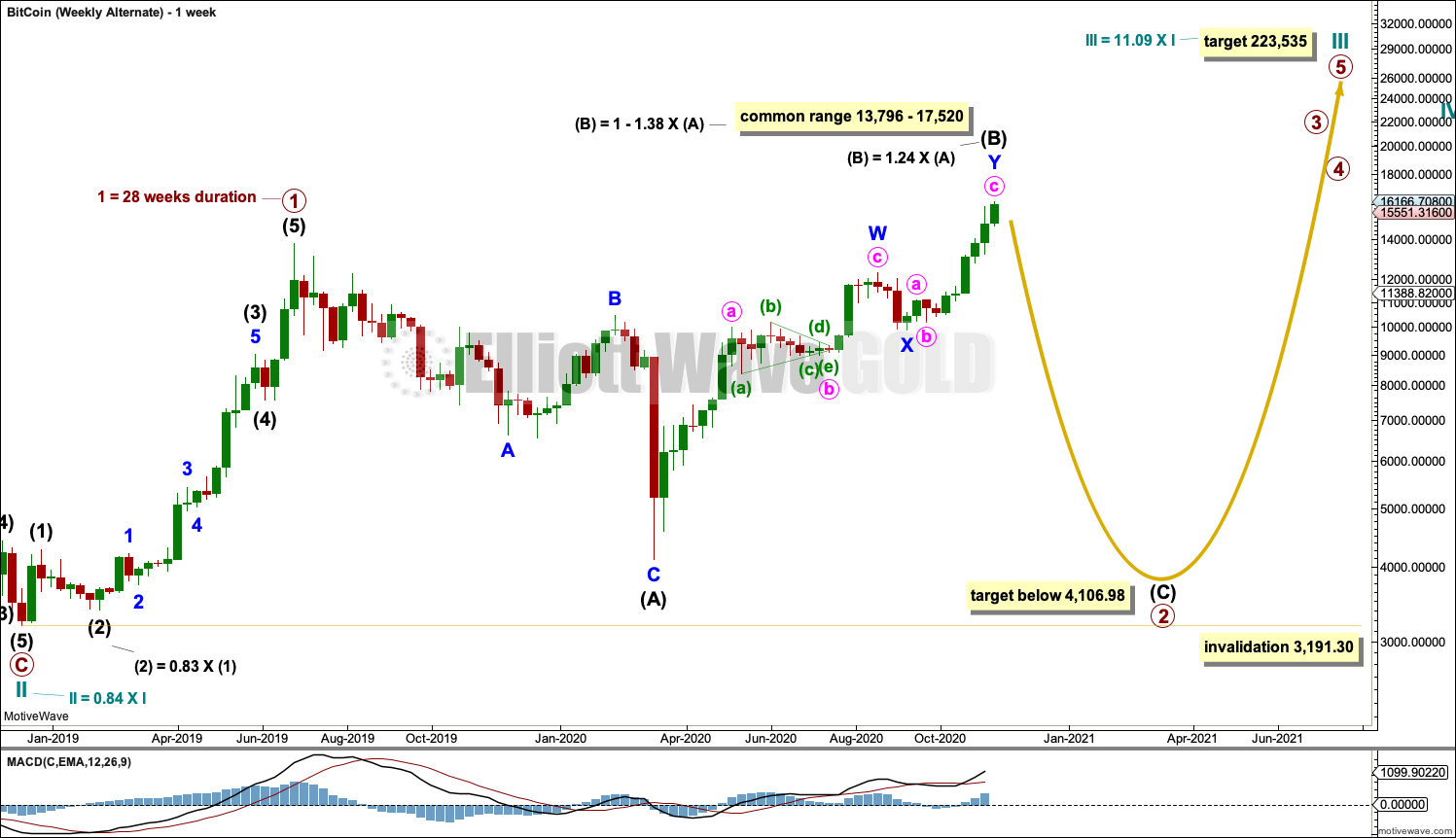 This wave count is published in the spirit of always considering multiple possibilities.

It is possible that primary wave 2 may not be over and may continue further as an expanded flat.

Intermediate wave (C) of an expanded flat would be extremely likely to move at least slightly below the end of intermediate wave (A) at 4,106.98 to avoid a truncation and a very rare running flat.

This wave count has a very good fit in terms of Elliott wave structure. Intermediate wave (B) fits very well as a double zigzag, which may be complete or may extend a little higher. However, this alternate wave count does not have support from classic technical analysis, so it has a very low probability. It should only be seriously considered if price invalidates the main wave count and provides confidence in this alternate. 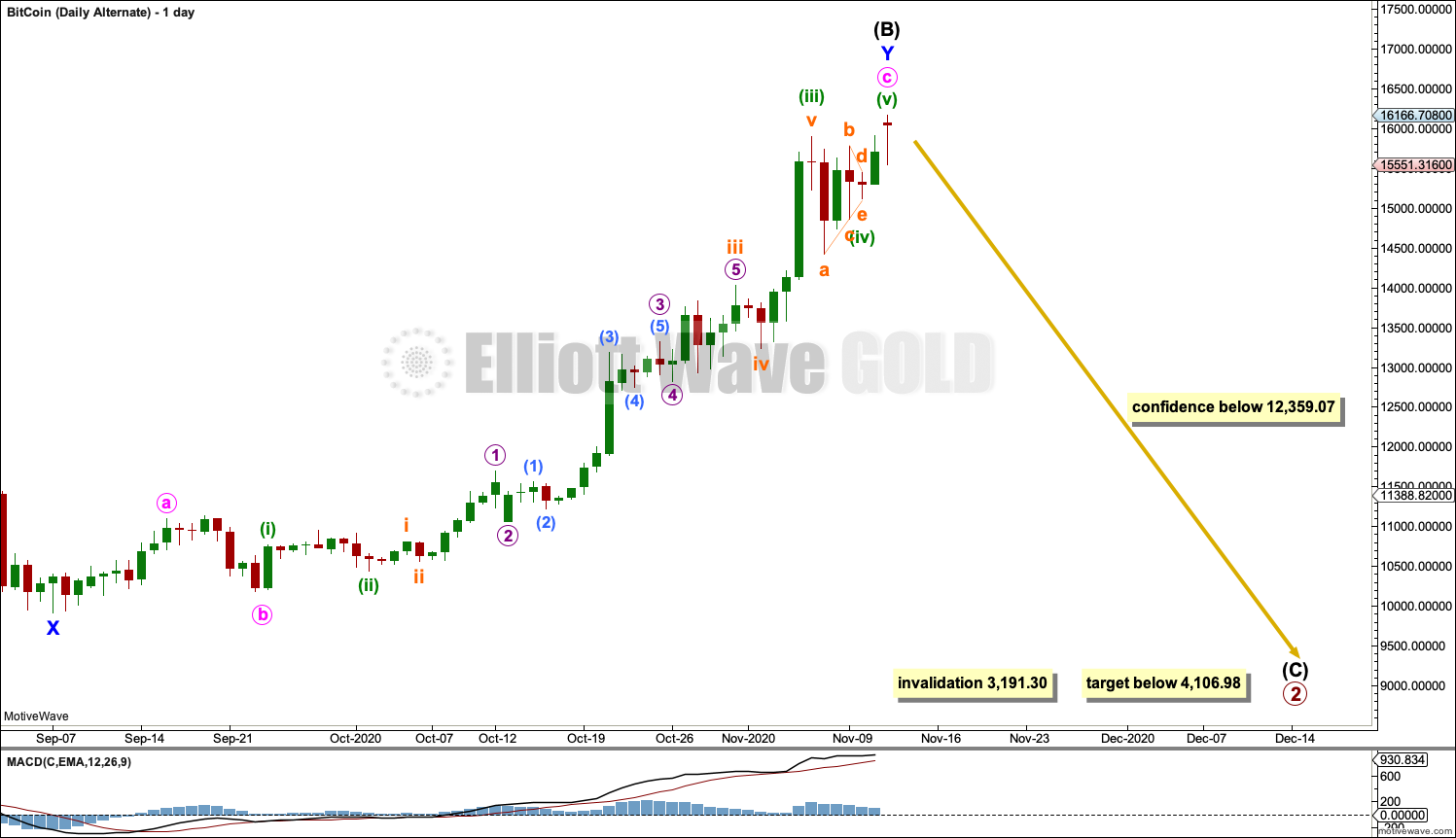 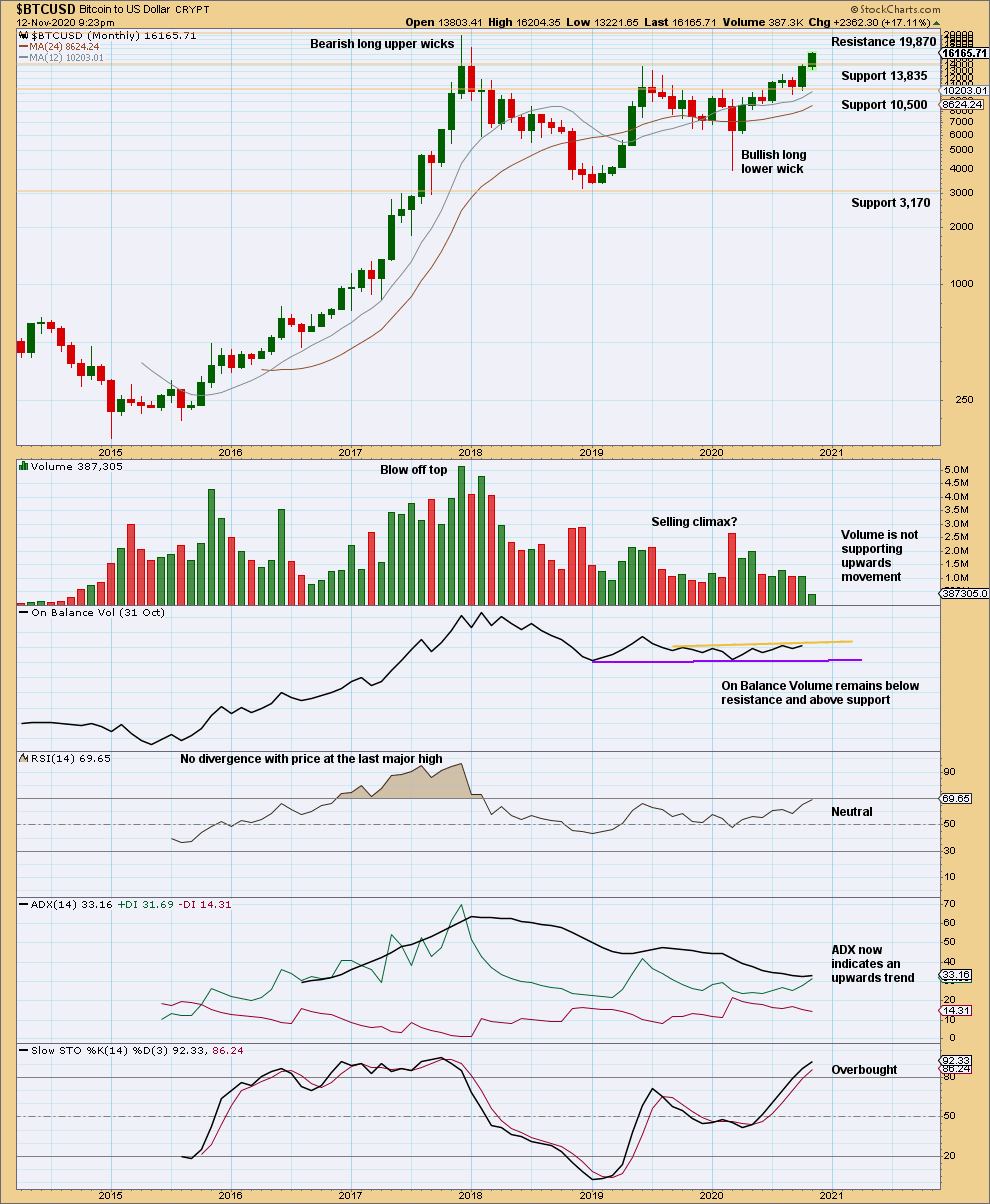 Price has broken above resistance, which was about 13,835, and may now offer support.

However, On Balance Volume has not confirmed the breakout; it remains below resistance and is not making corresponding highs. This may offer a very small support to the alternate Elliott wave count.

On balance this chart is bullish and supports the main Elliott wave count. The breakout above 13,835 is particularly bullish. Look for next strong resistance at the all time high at 19,870.

There is an upwards trend. Stochastics is overbought, but this may remain so for an extended period of time while price moves a considerable distance when this market trends. 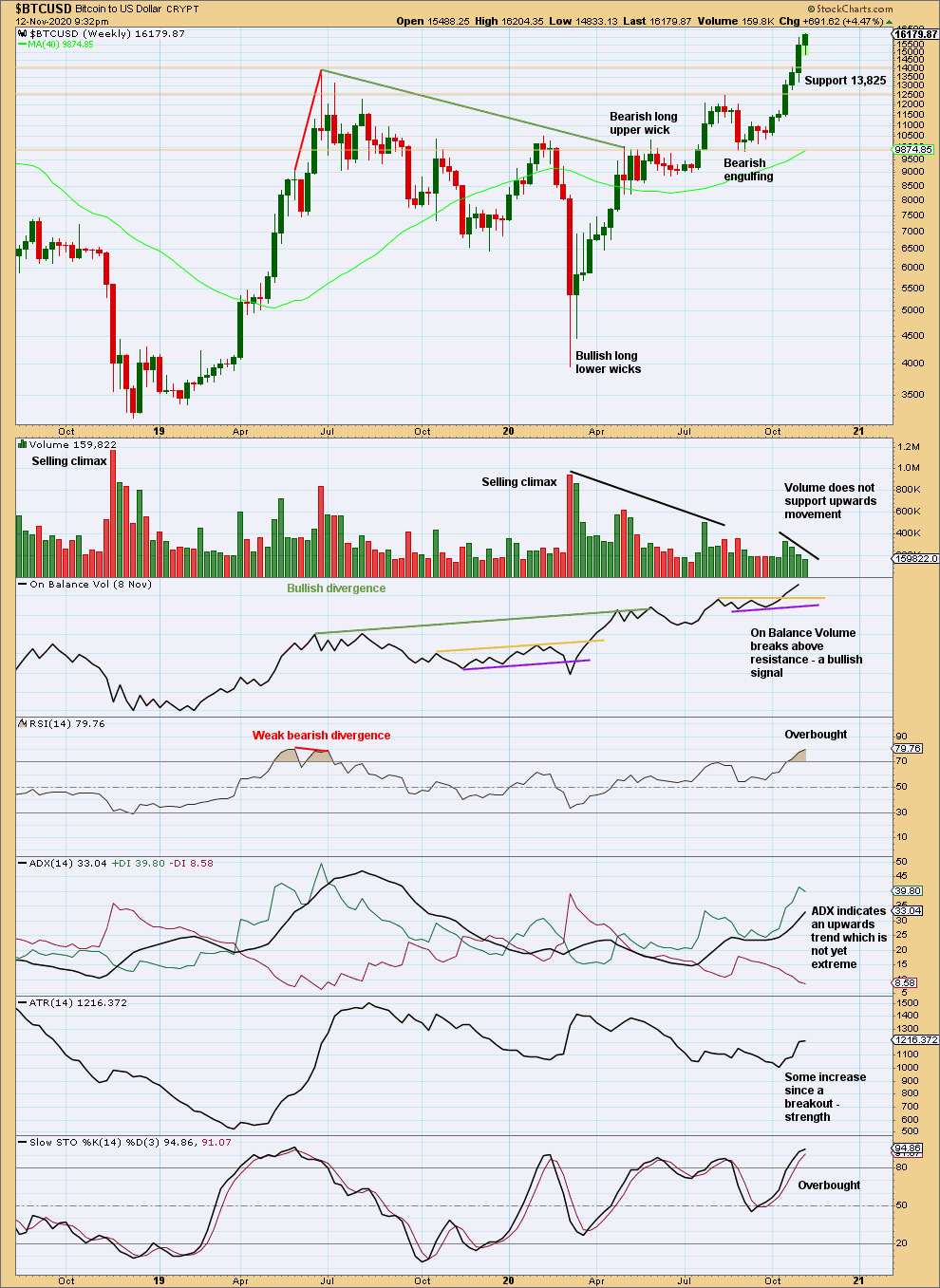 For the short term, the upwards breakout above 13,825 three weeks ago does not have support from volume at the weekly chart level. This may offer a very little support to the alternate Elliott wave count. However, this chart is bullish and in the early stages of its bullish trends Bitcoin does not always exhibit support from volume. A recent example of this is in March and April of this year. 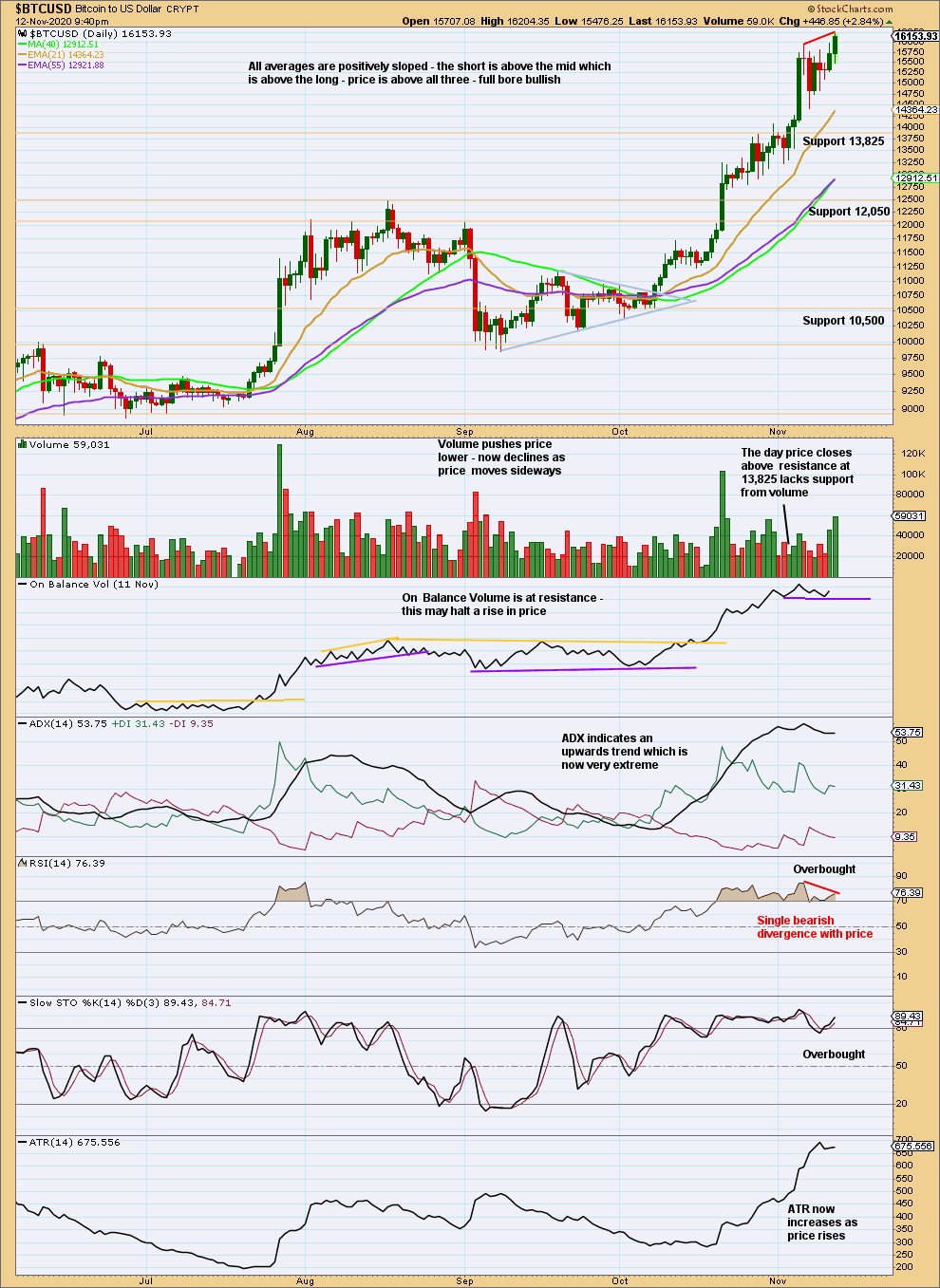 The target calculated from the triangle was at 12,099, which has been passed.

A small pennant pattern may have just formed and price has broken out above it. A target calculated from the flag pole is at 18,409.

At this time, Bitcoin looks like it may be vulnerable to a pullback: ADX is very extreme, and RSI is overbought and exhibiting bearish divergence with price. If a bearish candlestick pattern forms on the daily chart, then look for a pullback. Use support lines as guides to how low a pullback may go.