The main Elliott wave count in last analysis, on 12th November, expected more upwards movement and a further increase in strength. This is exactly what is happening.

Today’s analysis focusses on how to identify when a larger pullback or consolidation may  arrive.

Summary: Overall, the upwards trend may continue. A provisional short-term target is at 44,872.

Expect support now for any deeper pullbacks at 19,870.

Another blow off top may be forming. Look for a vertical rise of 2-4 weeks. This current week may be only the first. Thereafter, look for bearish candlestick reversal patterns on the weekly and / or daily charts, and possibly bearish divergence between price and RSI. 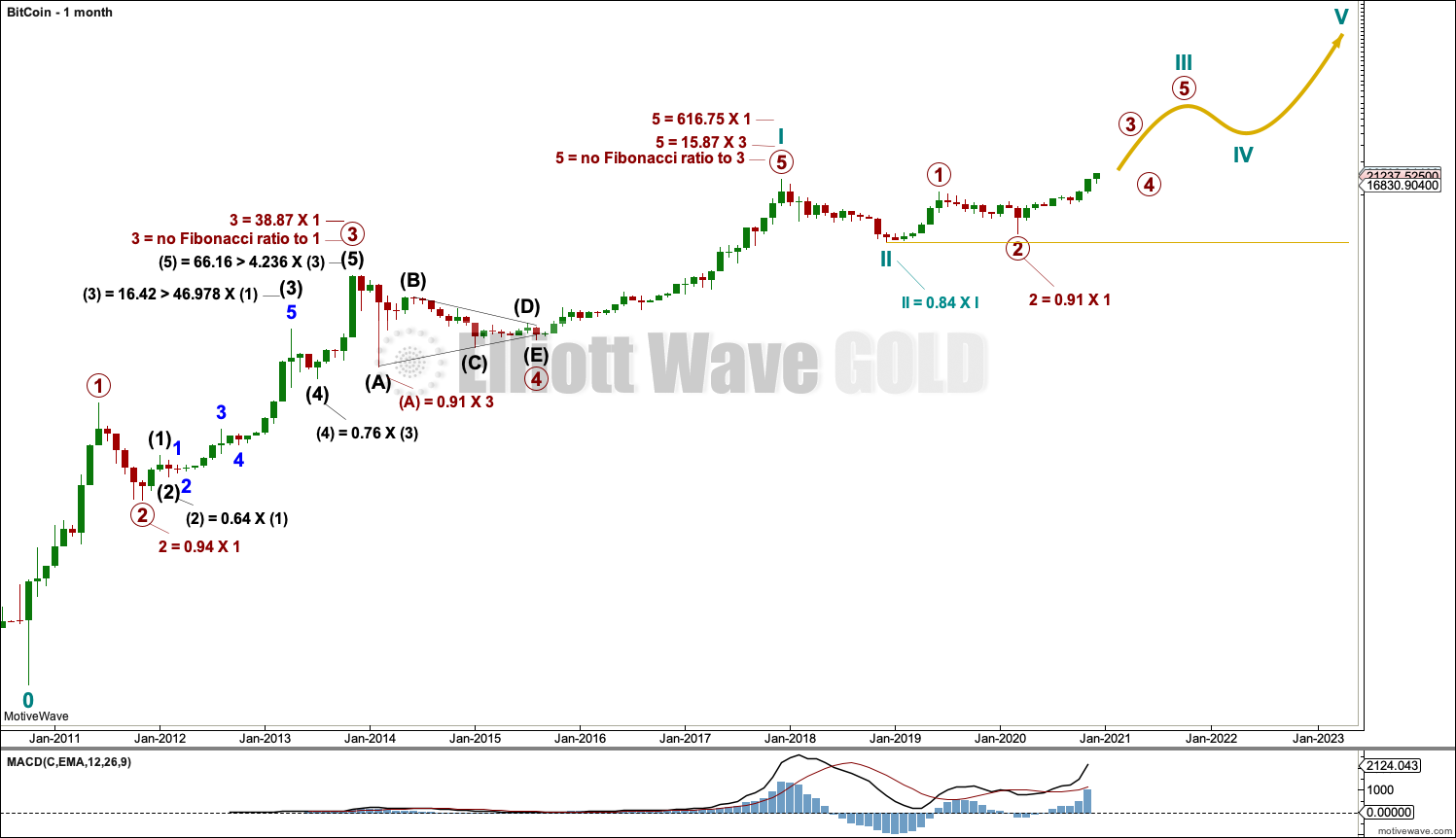 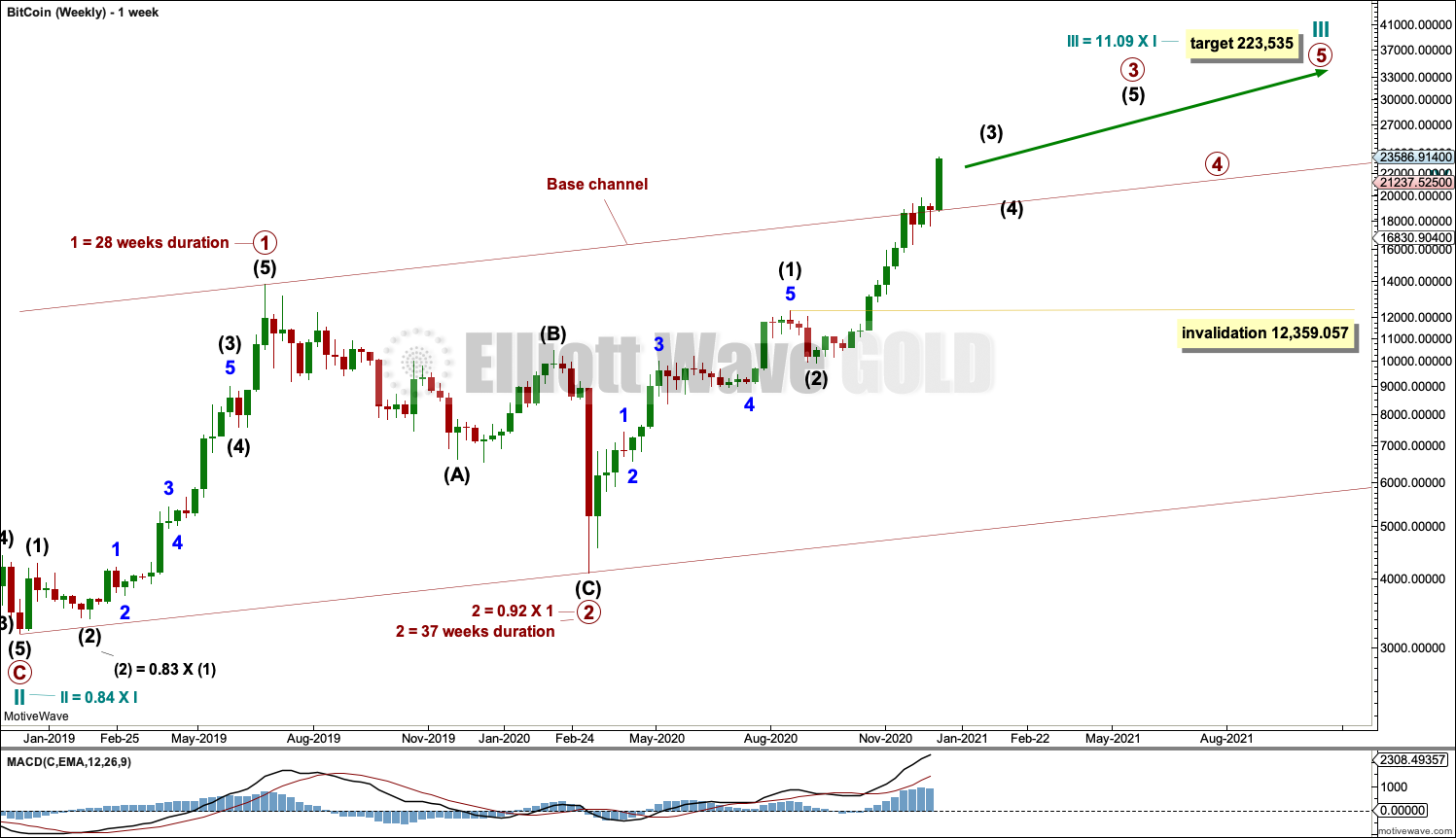 Cycle wave I lasted 7.2 years and cycle wave II may have been over within just under one year. It would be reasonable to expect cycle wave III to last about 7 years, or possibly a Fibonacci 8 or 13 years. At this stage, it may be now within its 24th month.

If this wave count is correct, then a third wave up at two large degrees may be underway and may develop further strength. Classic technical analysis will again be used to identify the next major high in place. The target calculated is provisional; if it is wrong, the target may not be high enough. All of my calculated targets in the run up to the all time high in December 2017 were too low by a wide margin. 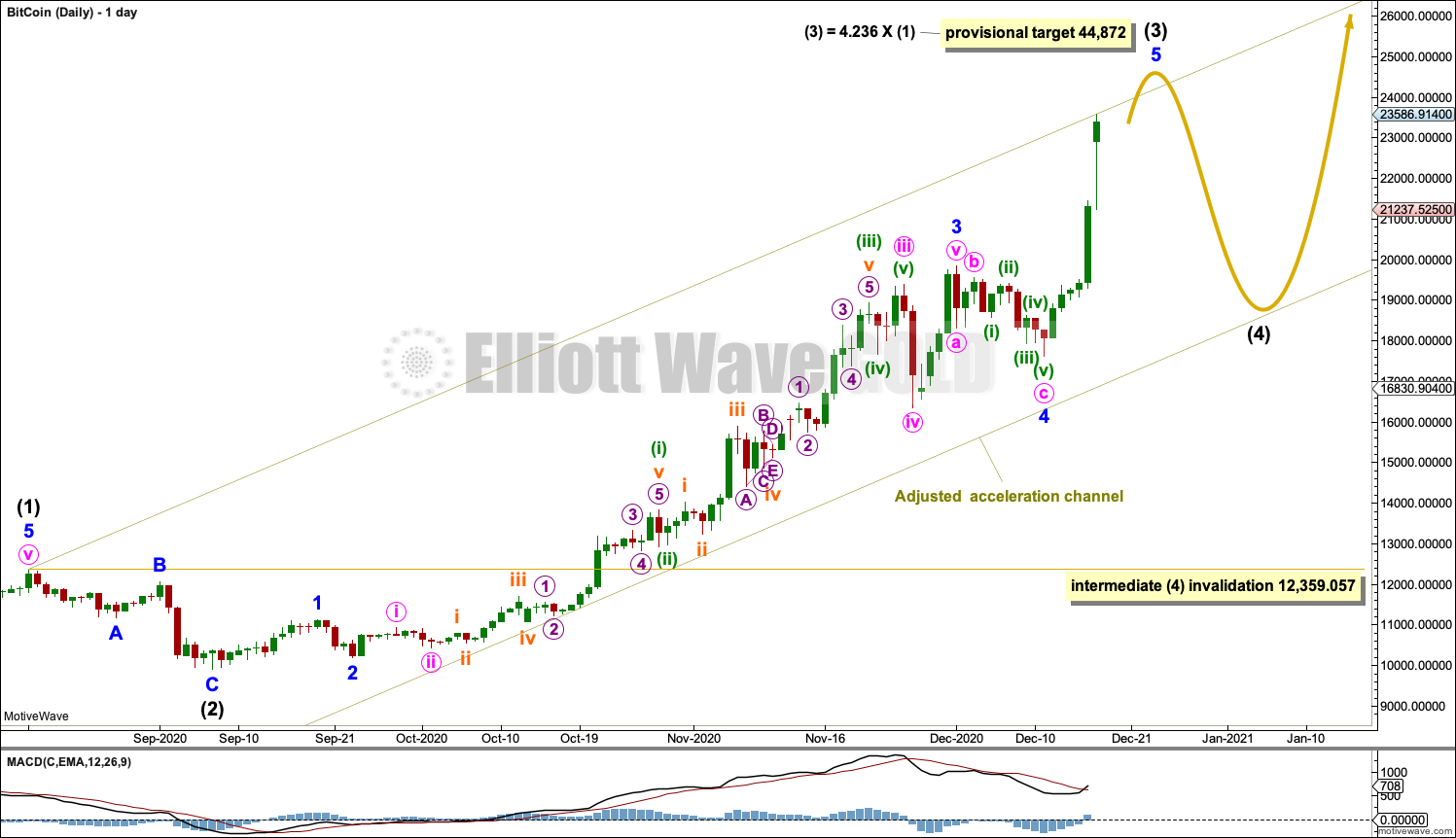 The main daily chart wave count focusses on the middle of primary wave 3.

Intermediate wave (3) may only subdivide as an impulse.

Bitcoin typically exhibits swift and strong fifth waves, particularly fifth waves to end third wave impulses one degree higher. This behaviour is typical for commodities, and of all the markets I analyse Bitcoin is the most extreme in this tendency. The strength in upwards movement of the last two days fits expectations for behaviour from this wave count; minor wave 5 to end intermediate wave (3) may be particularly strong. 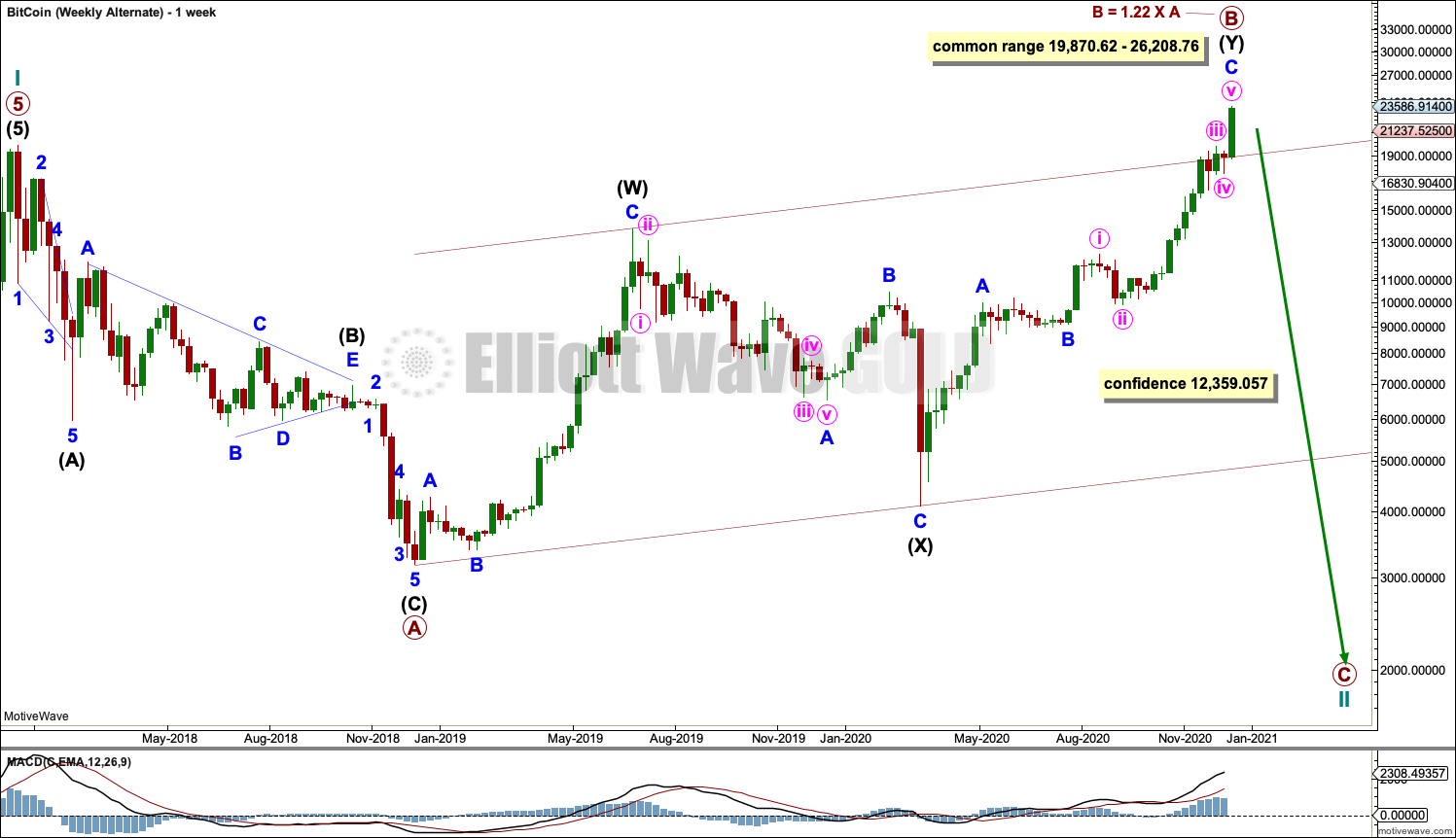 This wave count is published in the spirit of always considering multiple possibilities.

It is possible that cycle wave II may not be over and may continue further as an expanded flat.

B waves within expanded flats are a 1.05 length or longer than the corresponding A wave. In this case, primary wave B may now be a 1.22 length to primary wave A. Primary wave B may still continue higher and this wave count would remain valid; the expanded flat may remain within normal guidelines. The common range of B waves within flats is from 1 to 1.38 the length of their corresponding A wave (the price range is provided on the chart).

Primary wave C of an expanded flat would be extremely likely to move at least slightly below the end of primary wave A at 3,191.3035 to avoid a truncation and a very rare running flat.

Cycle wave II may not move beyond the start of cycle wave I below 0.01.

This alternate wave count does not have support from classic technical analysis, so it has a very low probability. It should only be seriously considered if price invalidates the main wave count and provides confidence in this alternate. 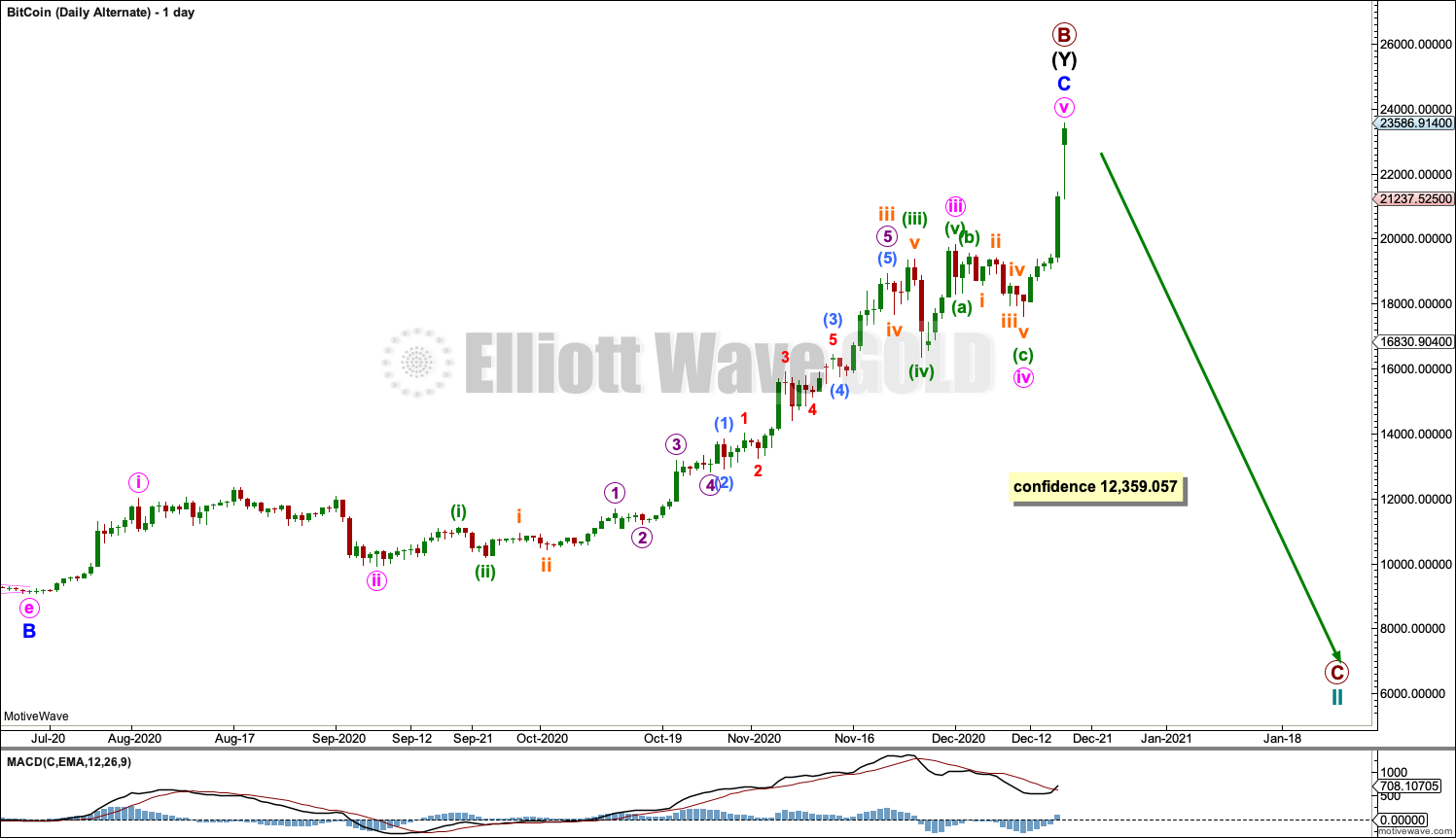 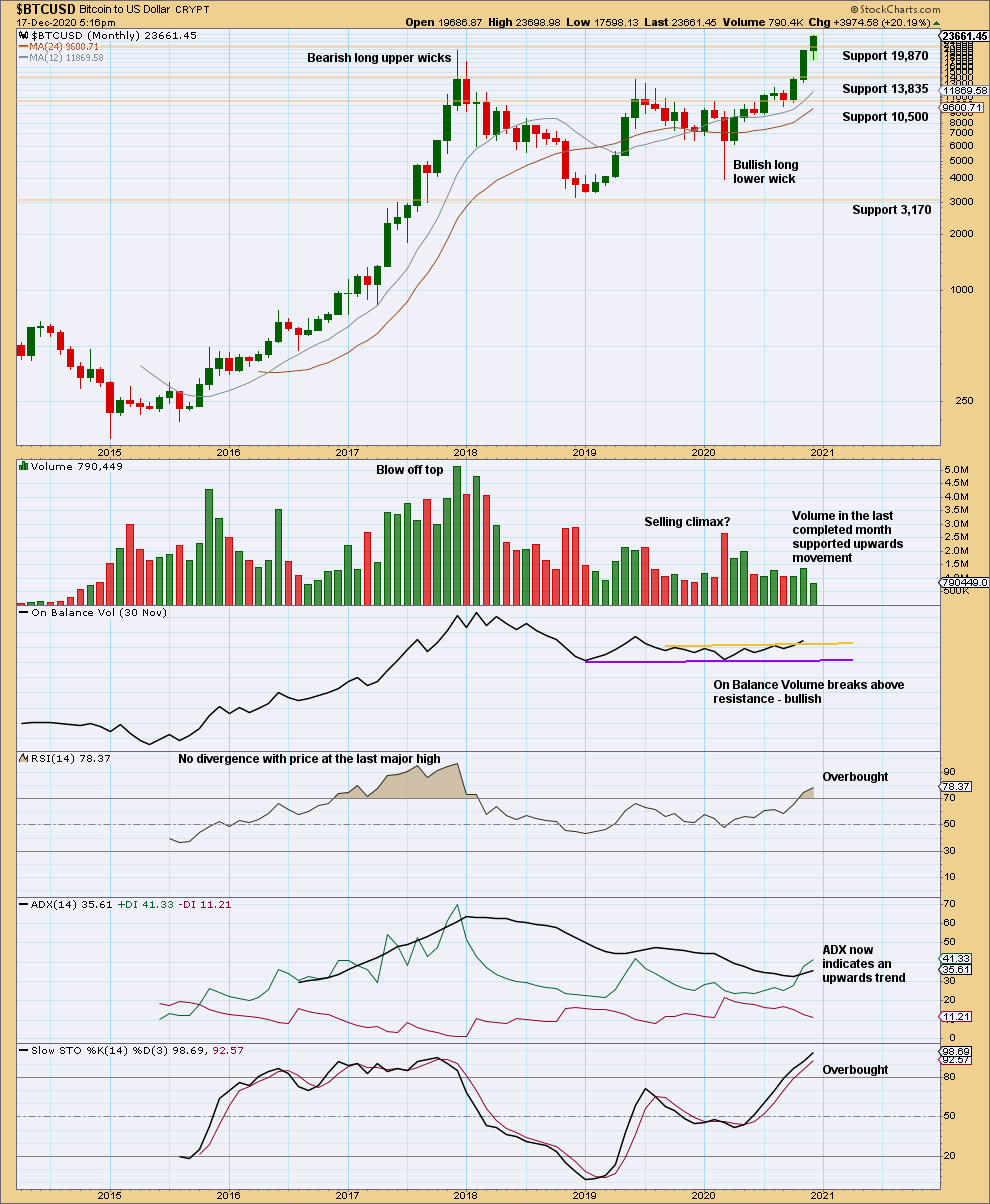 Price has broken above final resistance at 19,870 with support from volume. ADX indicates an upwards trend that is not extreme.

When this market trends, then Stochastsics, RSI and ADX may all remain extreme for a few months at the monthly chart level while price moves a considerable distance. Highs are best identified at the daily and weekly chart level. This current trend may continue for a few more months and price may travel a considerable distance before a  trend change. 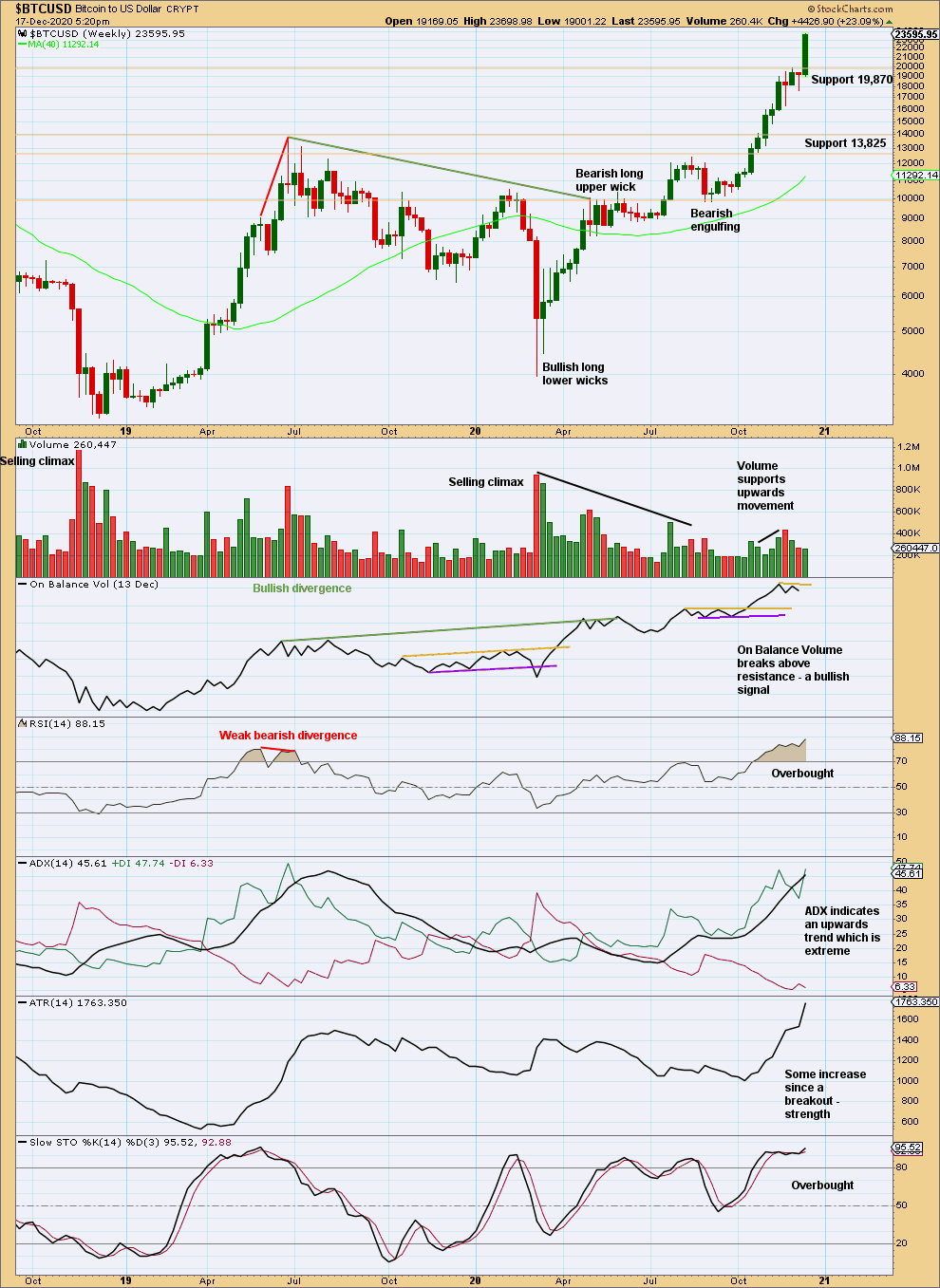 The next sharp rise to the all time high at 19,870.62 on the 17th of December 2018: vertical movement for three weeks, a strong increase in volume up to the last week (which saw a fall in volume), a Bearish Engulfing pattern on the weekly chart that had support from volume; on the daily chart, ADX reached very extreme for a coupe of weeks or so, RSI reached overbought and there exhibited single bearish divergence, and early downwards movement from the high had support from volume. The following correction was 0.84.

In the last sharp rise to the week beginning June 24, 2019: Vertical movement for three weeks with the third weekly candlestick closing as a red doji and exhibiting a strong increase in volume; on the weekly chart ADX reached extreme, and RSI reached extreme and exhibited single bearish divergence; there was no candlestick reversal pattern on the weekly chart, but there was a large Bearish Engulfing pattern with support from volume on the daily chart; and, on the daily chart ADX was not extreme at the high, RSI was deeply overbought and exhibited no divergence, and there was a strong volume spike at the high.

Currently, RSI is overbought but exhibits no divergence with price. There is a strong upwards trend but so far with only one week of near vertical movement. The next few weeks should be watched closely for signs of another interim high. 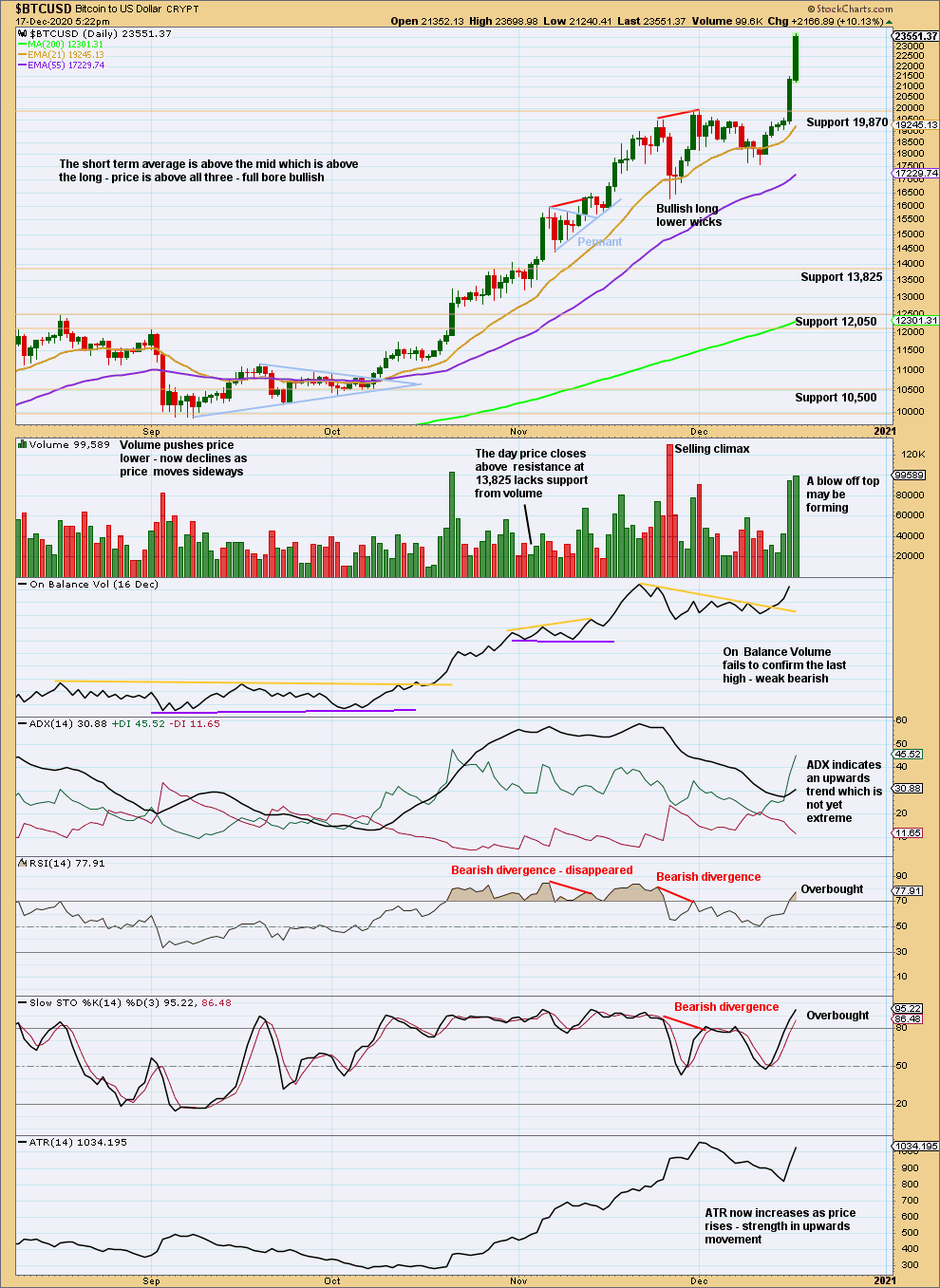 – There was no Bullish candlestick reversal pattern.

Currently, Bitcoin is in a strong upwards trend. It may be forming another blow off top. This may then be relieved by either a small pause with a little sideways movement, or it may see a 180° reversal and another deep pullback. If the daily and weekly charts both exhibit signs of a reversal, then a deeper pullback may be expected. Strong support at 19,870 may be expected now.