Summary: A short-term pullback may end about 29,711 to 28,269. Thereafter, a strong upwards trend may resume. If this expectation is wrong, then the pullback may have already been over on January 11, 2021.

Final support for any deeper pullbacks may be at 19,870. 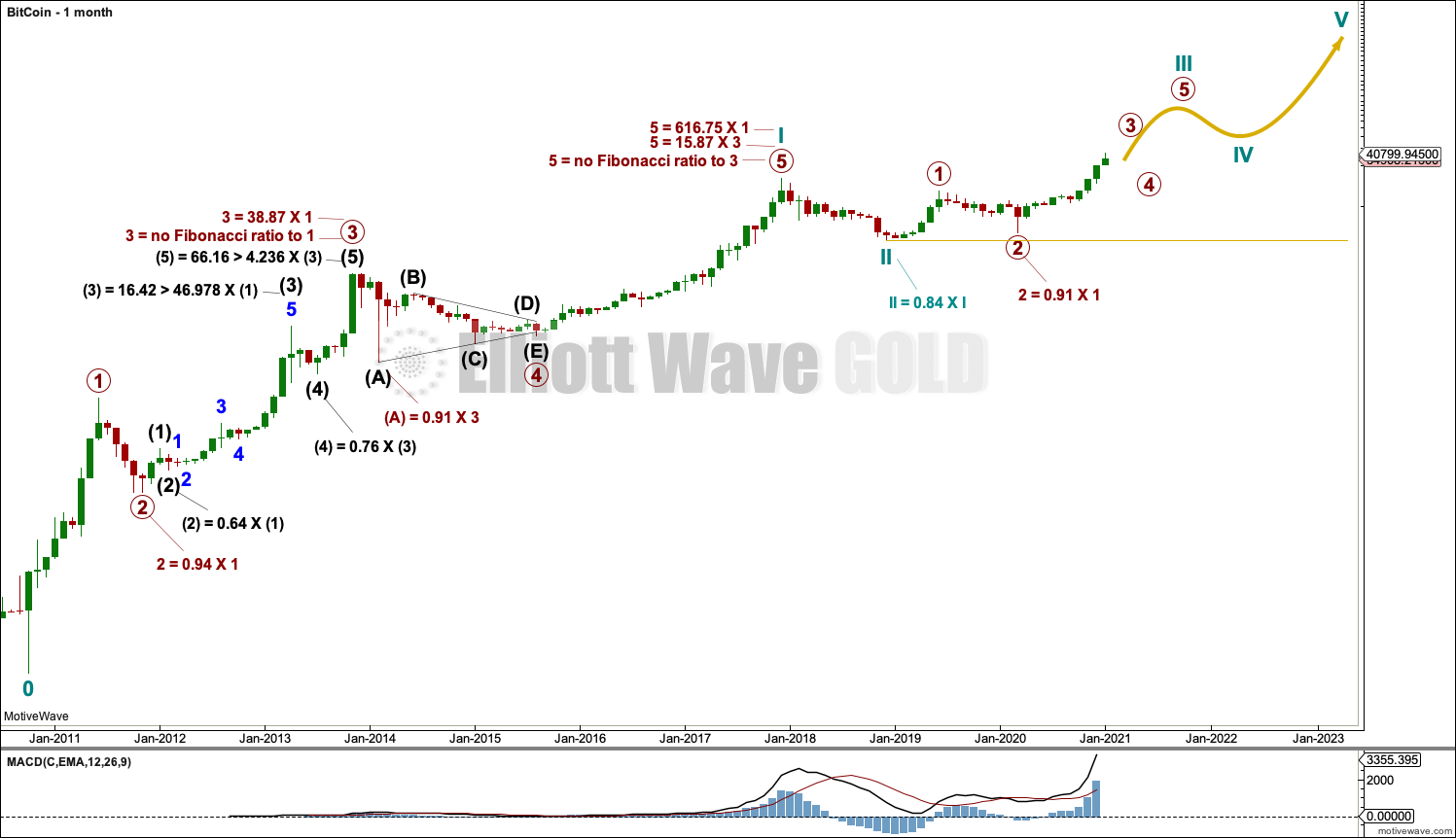 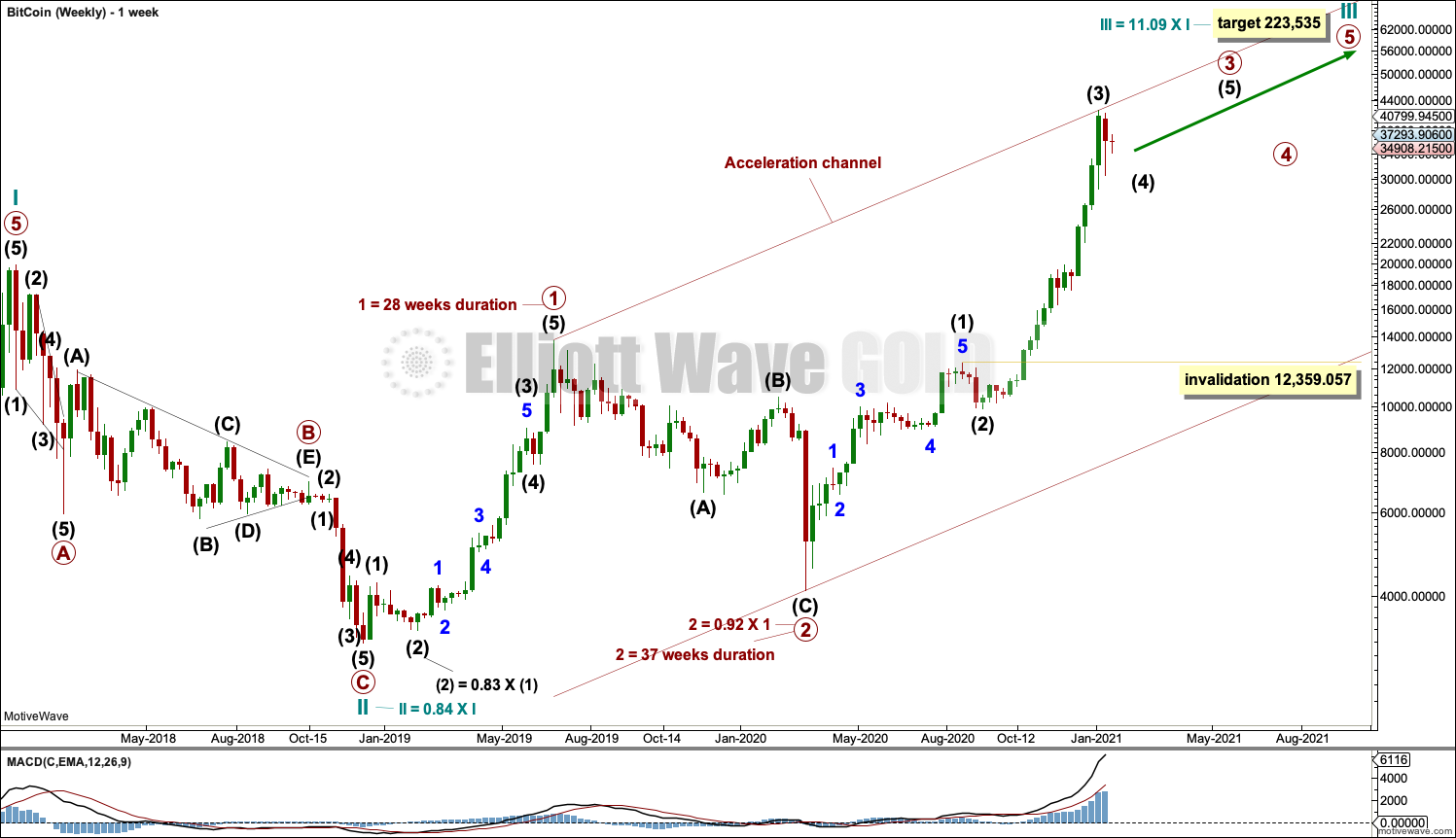 Cycle wave I lasted 7.2 years and cycle wave II may have been over within just under one year. It would be reasonable to expect cycle wave III to last about 7 years, or possibly a Fibonacci 8 or 13 years. At this stage, it may be now within its 25th month. 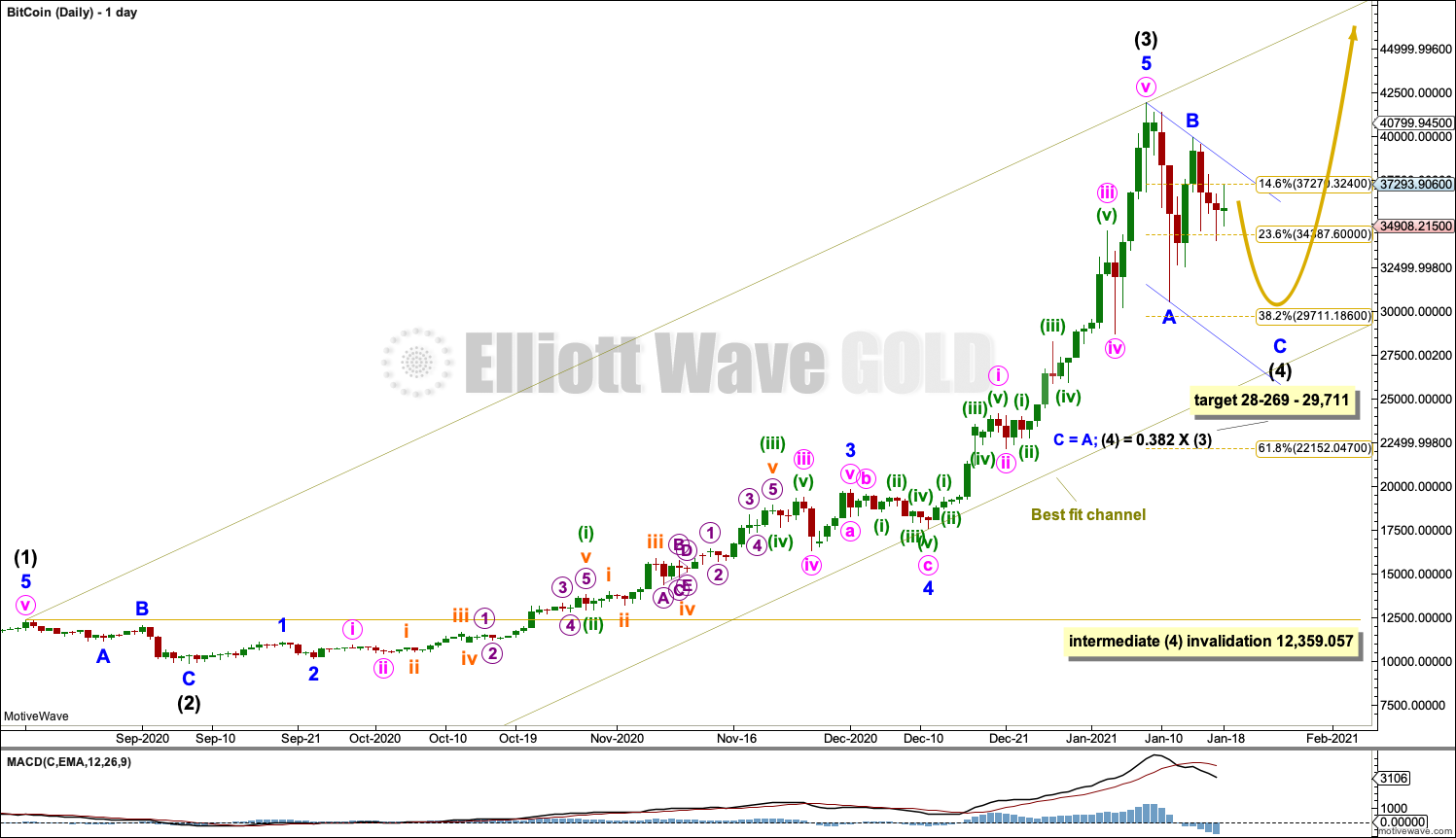 Intermediate wave (3) may be a complete impulse.

Bitcoin typically exhibits swift and strong fifth waves, particularly fifth waves to end third wave impulses one degree higher. This behaviour is typical for commodities, and of all the markets I analyse Bitcoin is the most extreme in this tendency. Minute wave v to end minor wave 5 to end intermediate wave (3) follows this tendency and has a typical look for Bitcoin. 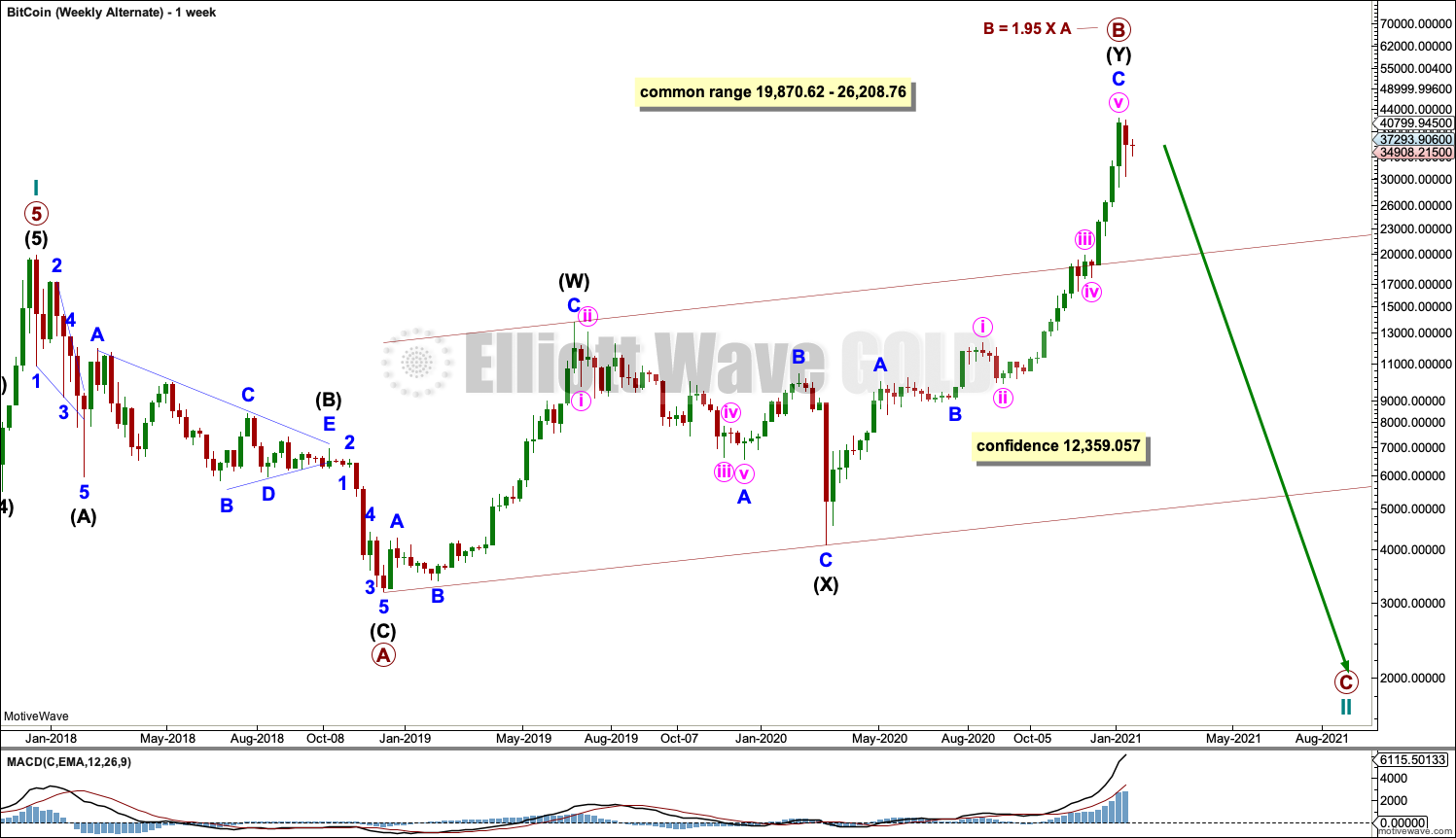 This wave count is published for the last time in this analysis. The probability is now too low for it to be considered.

B waves within expanded flats are a 1.05 length or longer than the corresponding A wave. In this case, primary wave B may now be a 1.95 length to primary wave A. The common range of B waves within flats is from 1 to 1.38 the length of their corresponding A wave. While there is no rule stating a limit for B waves within flats, there is a guideline which allows for B waves up to 2 times the length of A waves. Beyond this point the wave count should be discarded based upon an exceptionally low probability.

This alternate wave count does not have support from classic technical analysis, so it has a very low probability. For this reason, in conjunction with the length of primary wave B in relation to primary wave A, this wave count will no longer be published. 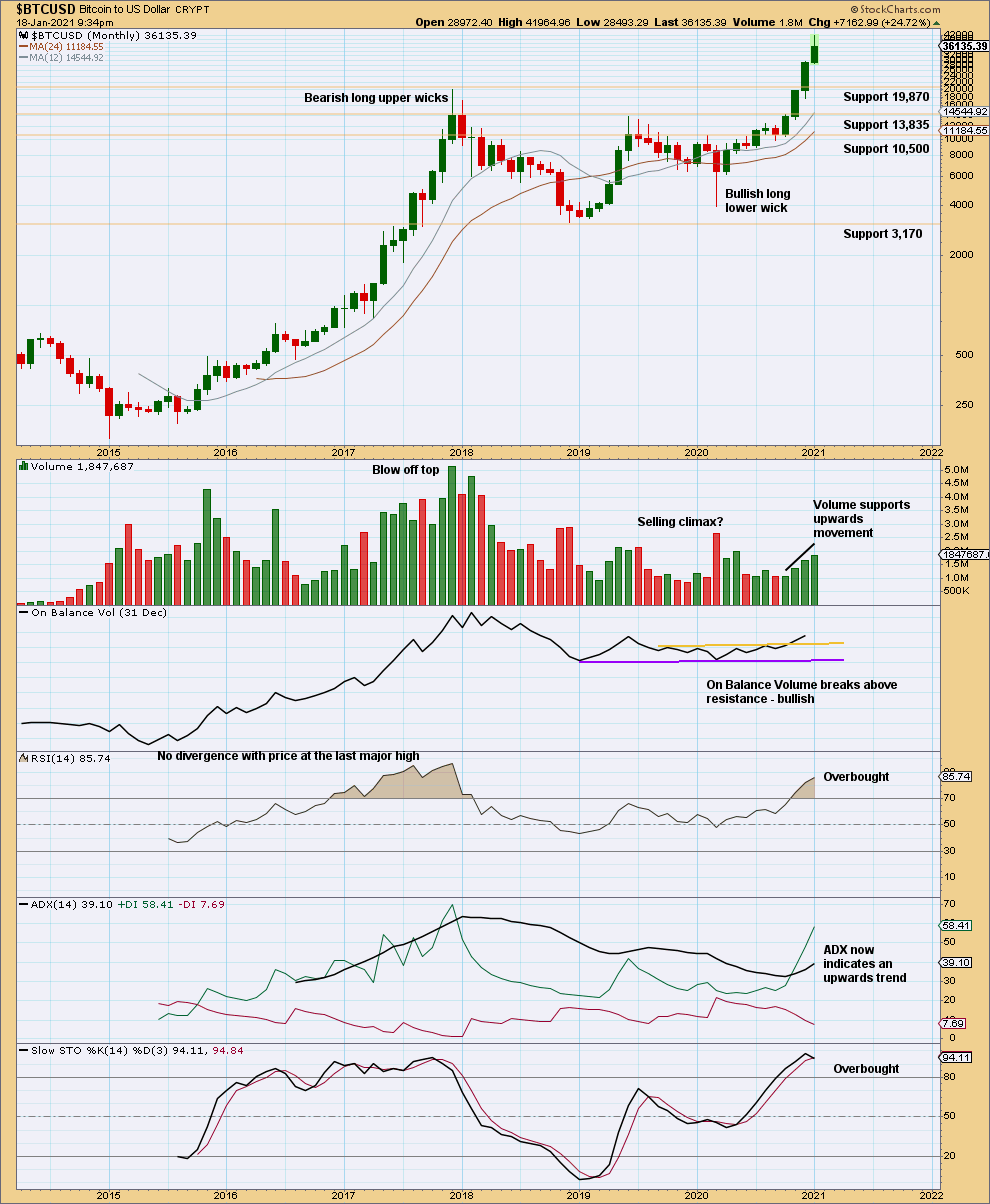 Price has broken above resistance at 19,870 with support from volume. ADX indicates an upwards trend that is not extreme.

When this market trends, then Stochastsics, RSI and ADX may all remain extreme for a few months at the monthly chart level while price moves a considerable distance. Highs are best identified at the daily and weekly chart level. This current trend may continue for a few more months and price may travel a considerable distance before a trend change. 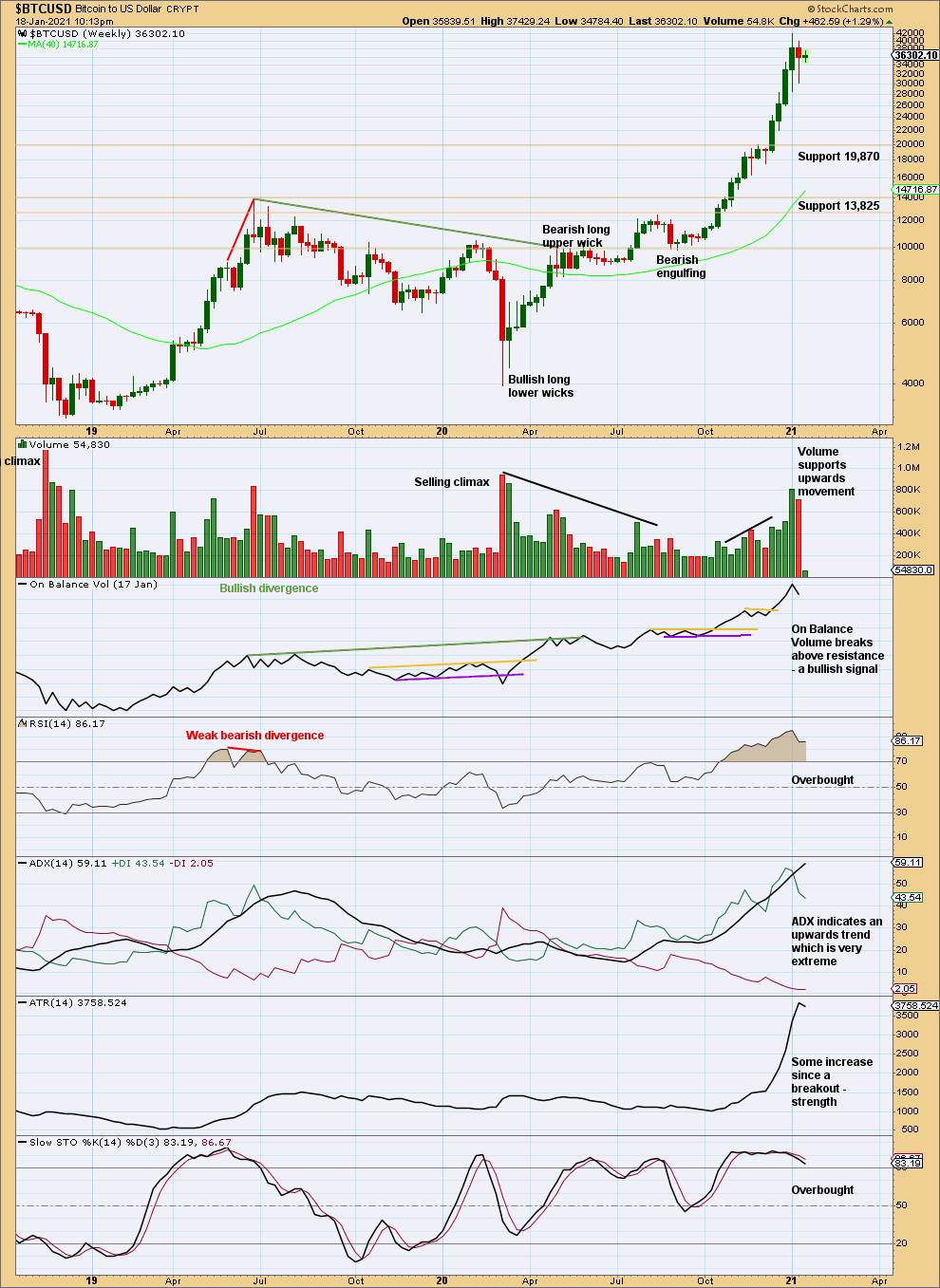 Bitcoin has just seen a vertical rise lasting four weeks up to the last high. There is no bearish candlestick pattern on the weekly chart. ADX and RSI remain very extreme, but this can persist for a while longer. 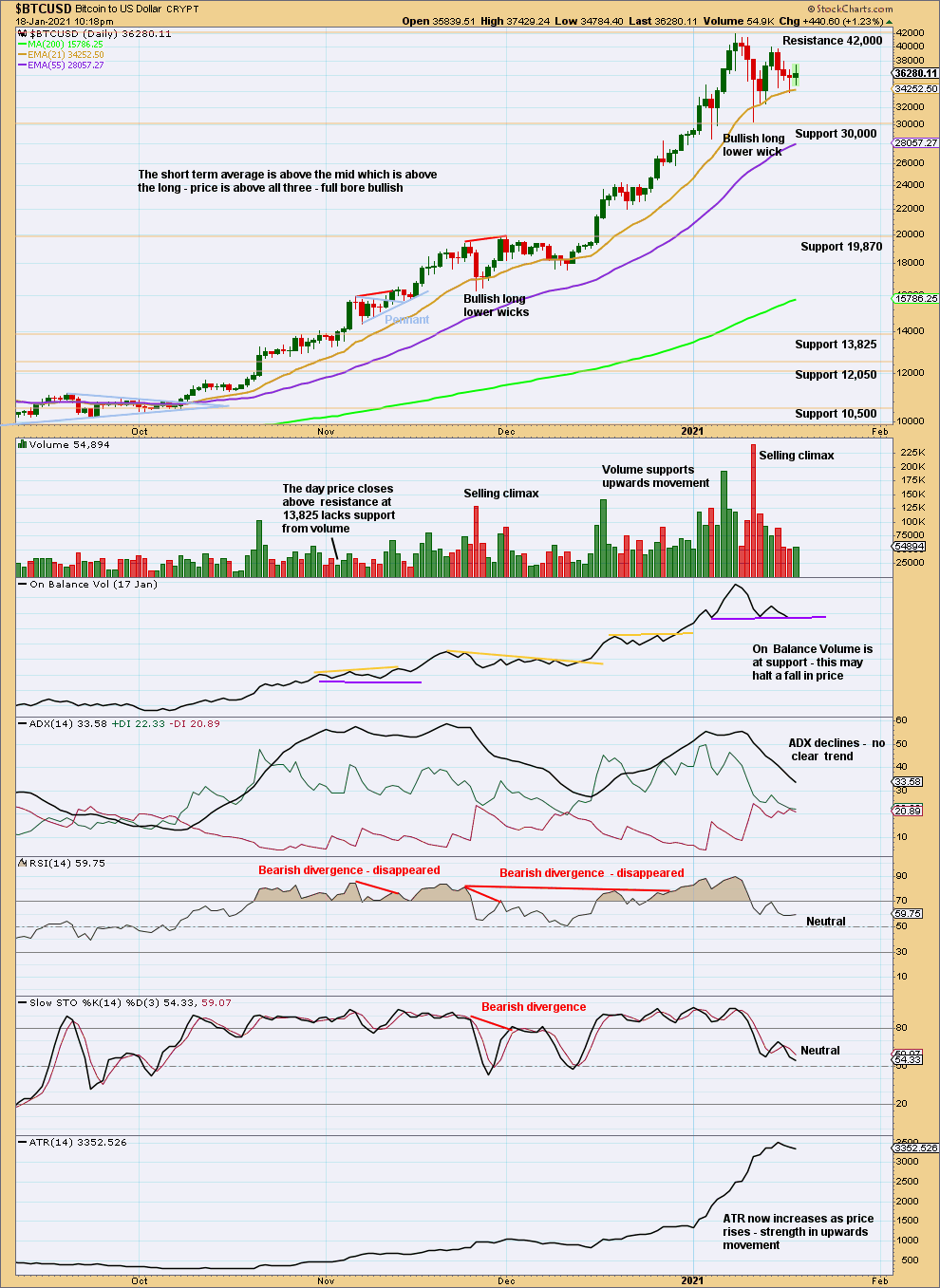 After the vertical rise of four weeks, a pause may continue with a consolidation or pullback. Support is identified on the chart. Support at 19,870 may be expected to be particularly strong if price gets that low.

It is noted that the last two times RSI reached overbought and there exhibited bearish divergence with price, that this was not followed by any significant consolidation or pullback and divergence simply disappeared as price continued  higher. RSI is not currently proving useful in identifying highs in this market.

Look for a breakout of the consolidation zone with support about 30,000 and resistance about 42,000.