Summary: Downwards movement has push from rising volume. This is very bearish. Expect downwards movement to continue until there is a bullish candlestick reversal signal on the daily chart. Next support below is at 3,612 and 2,980.

I cannot at this time yet see a completed corrective Elliott wave structure for this downwards movement, so I expect it is incomplete. 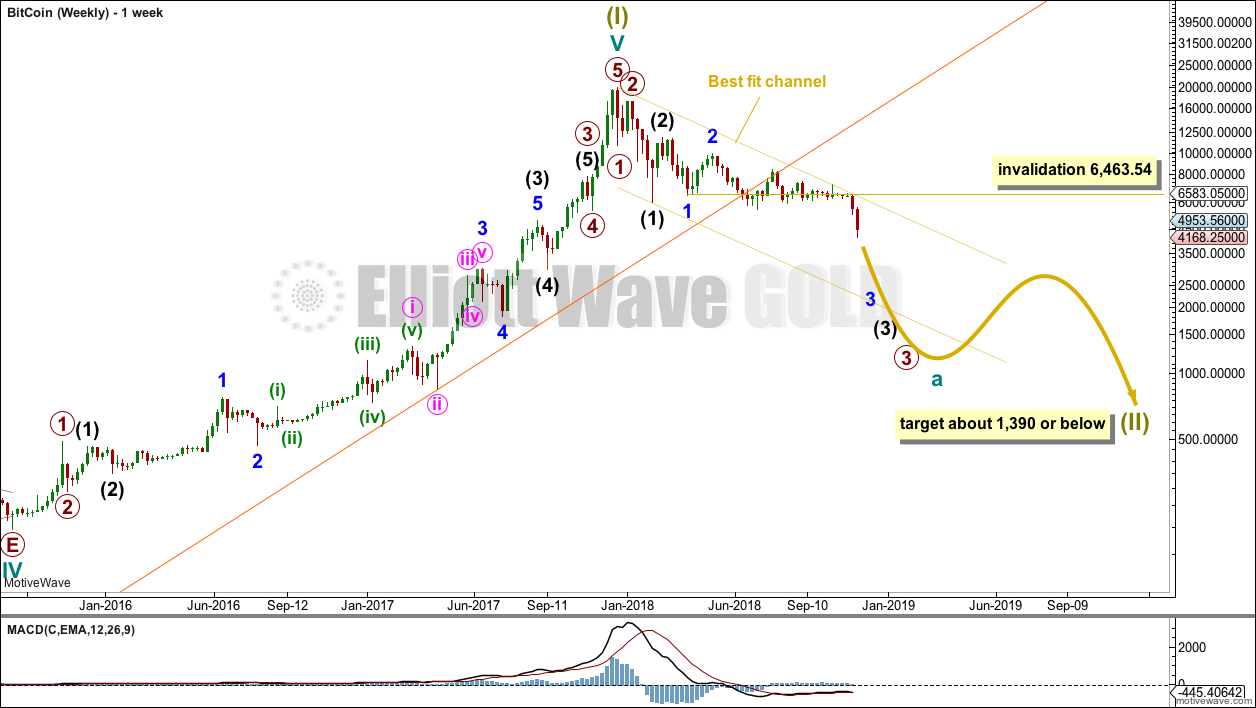 Super Cycle wave (II) would most likely be a zigzag, but it may also be a flat, combination or triangle; a zigzag would subdivide 5-3-5. Cycle wave a should subdivide as a five wave structure, but so far that would be incomplete.

Within this five wave structure unfolding lower, minor wave 3 may now have moved through its middle. Minor wave 4 may not move back up into minor wave 1 price territory above 6,463.54.

When cycle wave a may be seen as complete, then a one to multi-year bounce or consolidation for cycle wave b may be expected. This may present a weak buying opportunity, but the huge variation in structure of b waves makes this extremely risky. 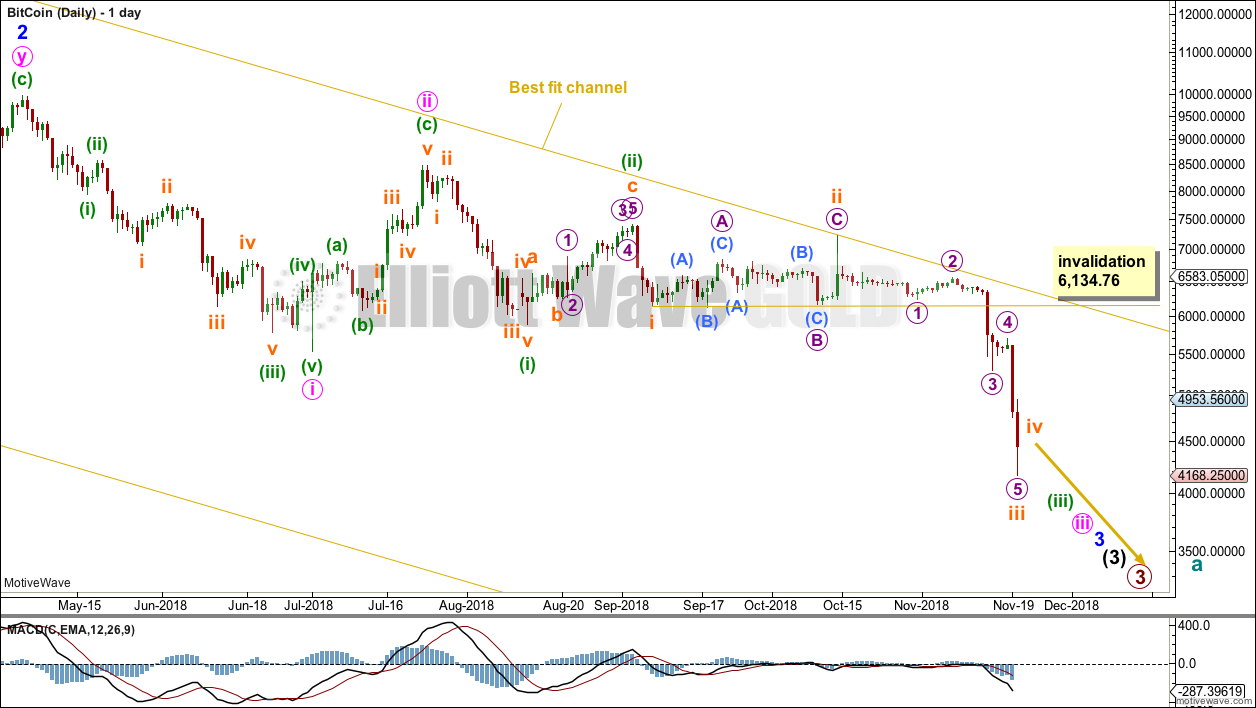 If Bitcoin is crashing, then a five down structure should develop at the weekly chart level. This would still be incomplete.

A third wave down may now be moving through its middle at six degrees. Bitcoin may be still winding up for a further spectacular plummet in price. The strongest fall may come towards the end of any one or more of these third waves as Bitcoin exhibits commodity like behaviour. Commodities tend to have their strongest portion of impulses in the fifth waves.

Only when a clear bullish reversal pattern forms on the daily chart would a more time consuming bounce or consolidation be expected to interrupt this downwards trend. Today that is not present, so it seems more reasonable to expect this downwards movement to continue. 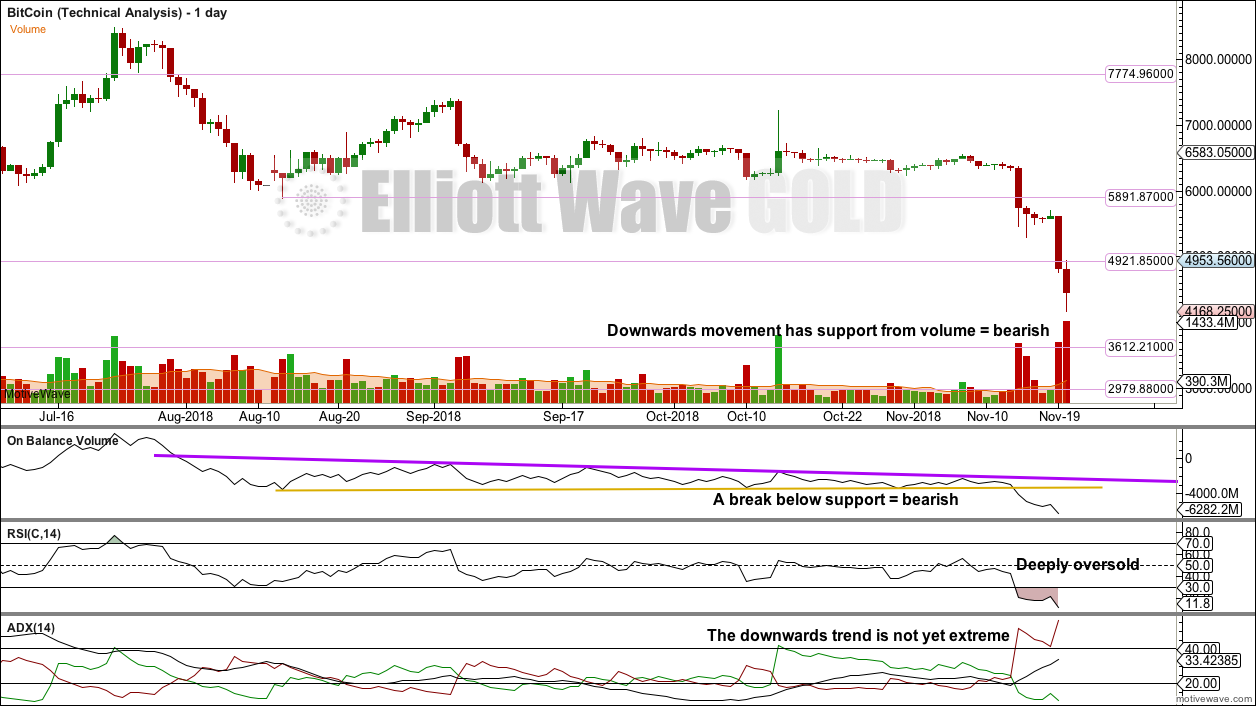 For the short term, support from volume is pushing price lower. This is very bearish.

For the current fall in price, the current Elliott wave count expects the fall to be larger in terms of duration than the previous two noted here, and at least equivalent in terms of price movement in that a fall of over 90% is expected now. Currently, ADX is not yet extreme. RSI is now deeply oversold, but past behaviour indicates this may continue for some time. There is plenty of room for this downwards trend in Bitcoin to continue.

So far at the lowest low from the all time high Bitcoin has only retraced 0.79. While this is deep, its corrections are usually deeper than this.

Support below is identified on the chart.