Last analysis on the 14th of March expected a downwards breakout from a consolidation, but this is not what has happened. Price broke above identified resistance on the 1st of April with support from volume.

Summary: More upwards movement is expected for the short to mid term. The question is whether this is a counter trend bounce within an ongoing bear market or the beginning of a new bull market.

It would be safest to assume that the bear market will continue while Bitcoin remains below 7,234.83. The final target is about 1,924, but it may be much lower than this; it is possible this bear market may see the end of Bitcoin.

A new high above 7,234.83 would indicate Bitcoin may be forming a new bubble to take price substantially above 19,870.

At this stage, it remains likely the the collapse of Bitcoin is incomplete. The main Elliott wave count outlines a continued collapse.

Now it is also possible that Bitcoin has found a new low and may be forming a new bubble. The alternate Elliott wave count outlines this idea. 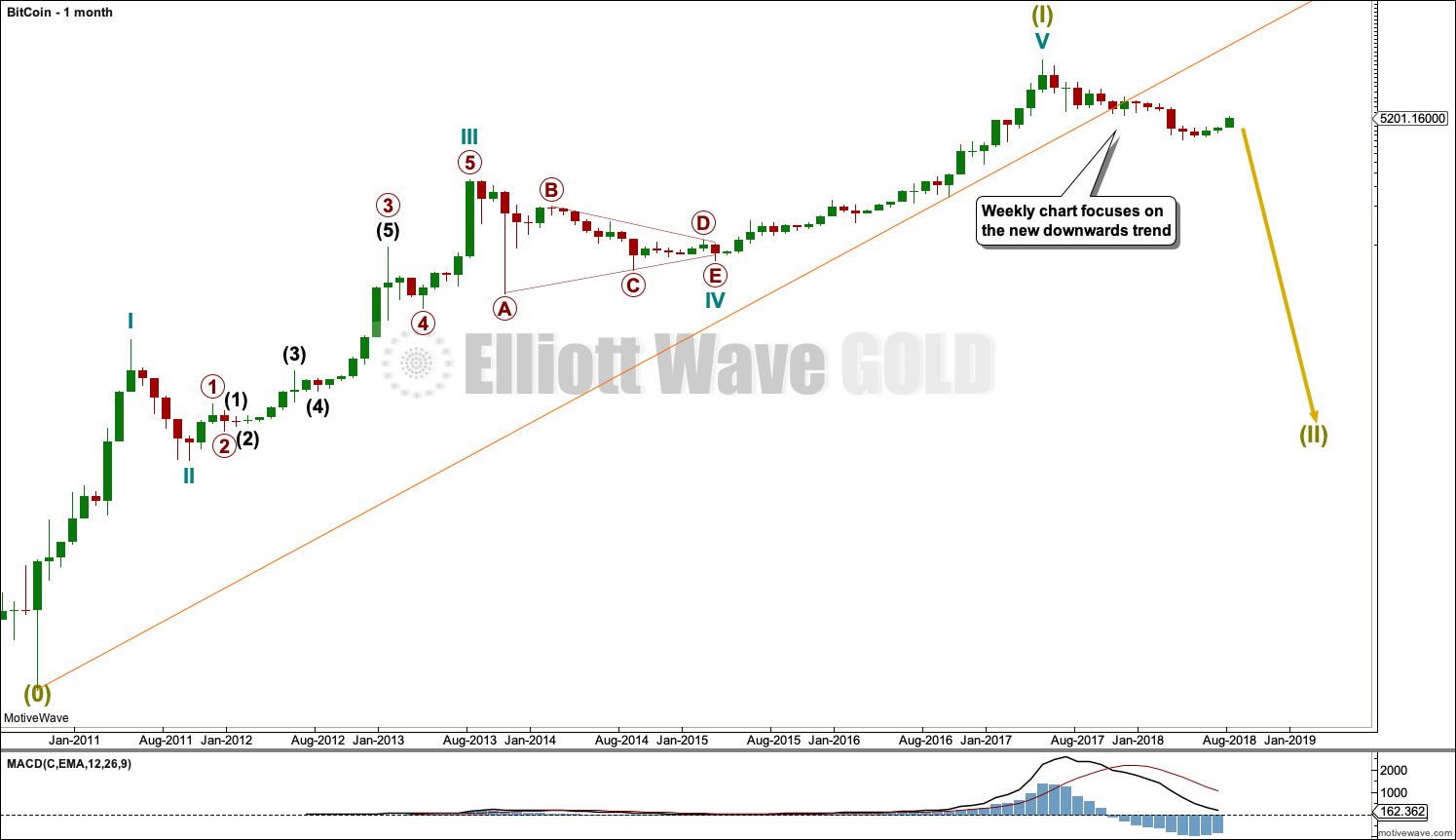 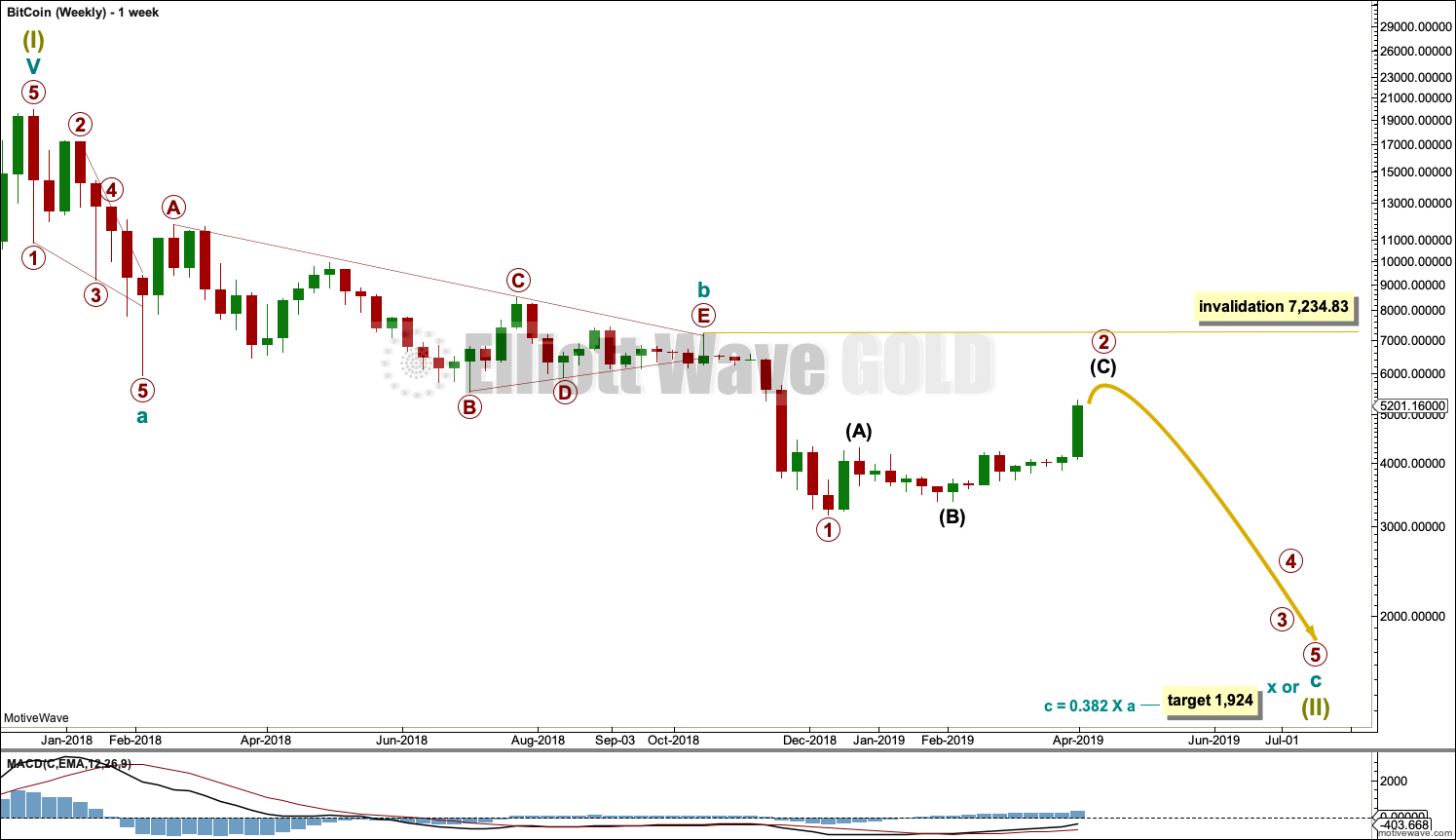 If this current drop continues like the first two examples, then a reasonable target may be about $1,390.94 or below.

Another frustrating aspect of Bitcoin is it does not fit within Elliott channels. Because it begins movements slowly and ends them quickly, it forms curved waves which breach channels early only to continue to new highs or lows. The channel on prior analysis is removed because it may not show where the current bounce finds resistance. 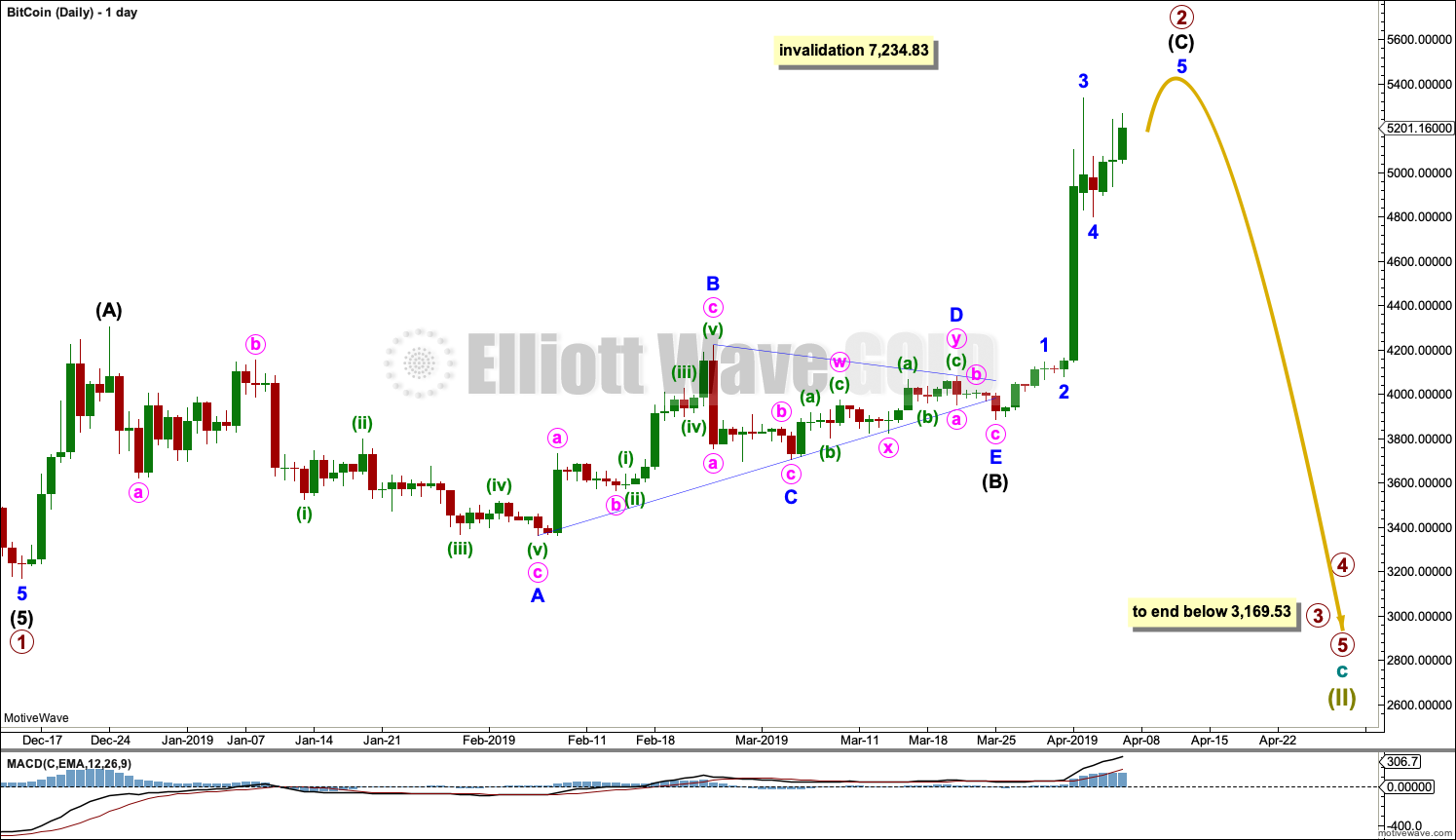 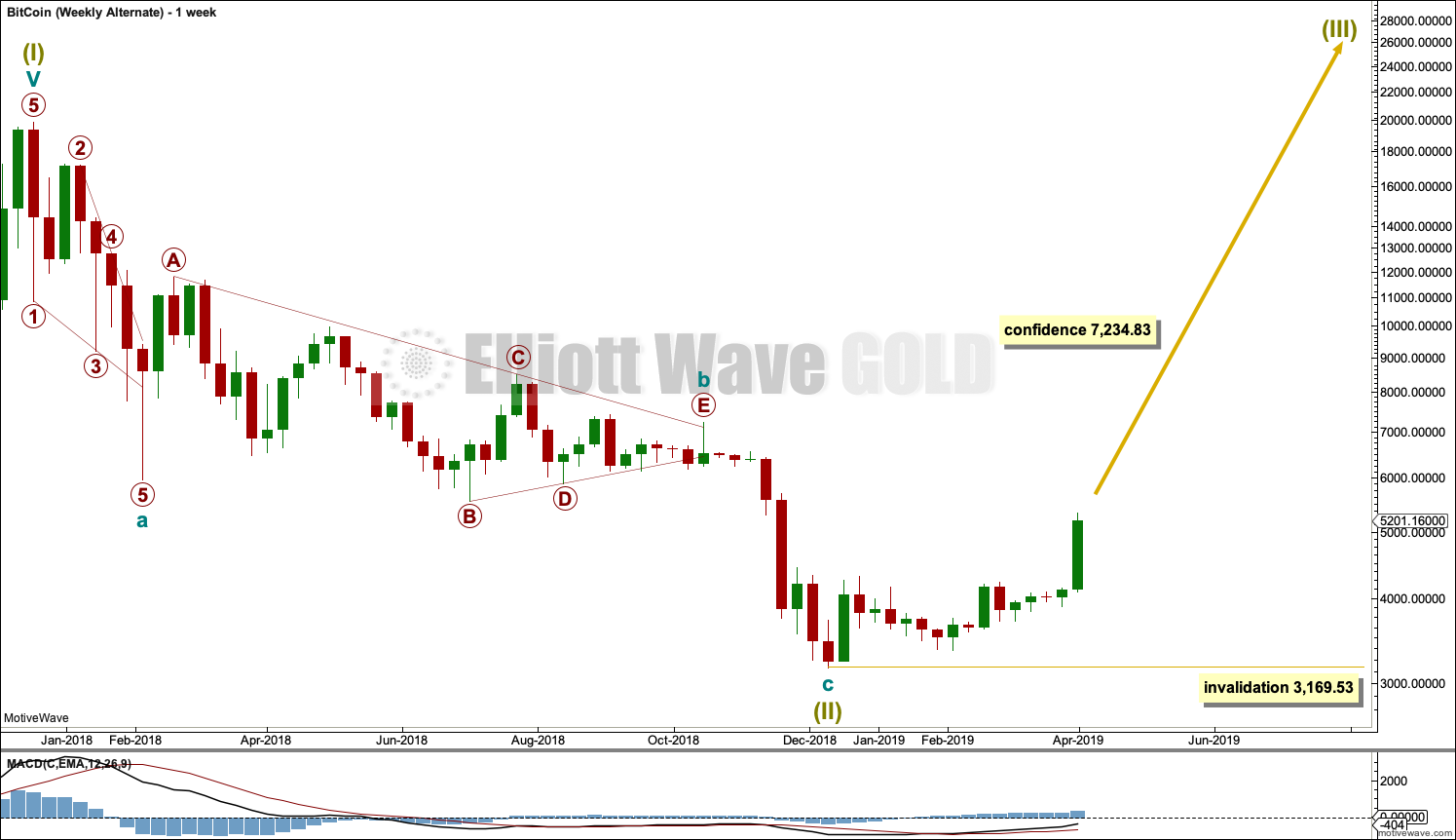 With an increase in upwards momentum and a breach of the channel containing prior downwards movement, it is time to now more seriously consider this alternate.

It is also again possible that Bitcoin may have found a low and may be in the early stages of a new bull market.

This wave count expects that the crash in price for Bitcoin was only 84% of value from the all time high. While this is possible, it would not follow the more common pattern of Bitcoin to crash over 90% in value. This must still reduce the probability of this wave count.

Within super cycle wave (III), no second wave correction may move beyond the start of its first wave below 3,169.53. 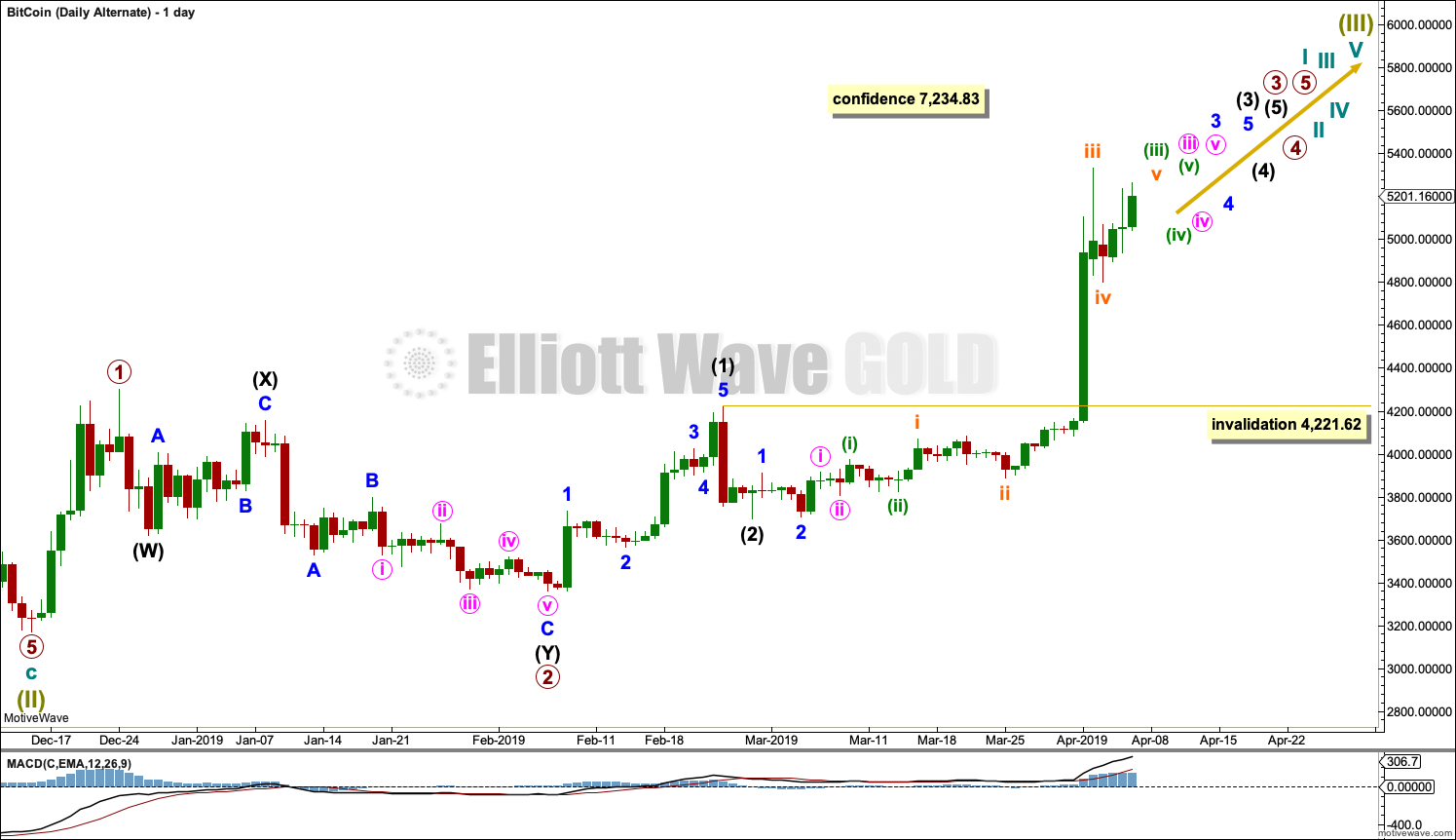 A new bull market (to form a new bubble) may have begun with a series of overlapping first and second waves.

A third wave now at five degrees may be about to unfold higher.

Typical of commodities, Bitcoin exhibits swift and strong fifth waves. This tendency is especially prevalent for fifth waves to end Bitcoin’s third wave impulses. Any one or more of subminuette wave v, minuette wave (v), minute wave v, minor wave 5, intermediate wave (5) or primary wave 5 may be very swift and strong. Look out for blow off tops ahead, to be relieved by small consolidations. 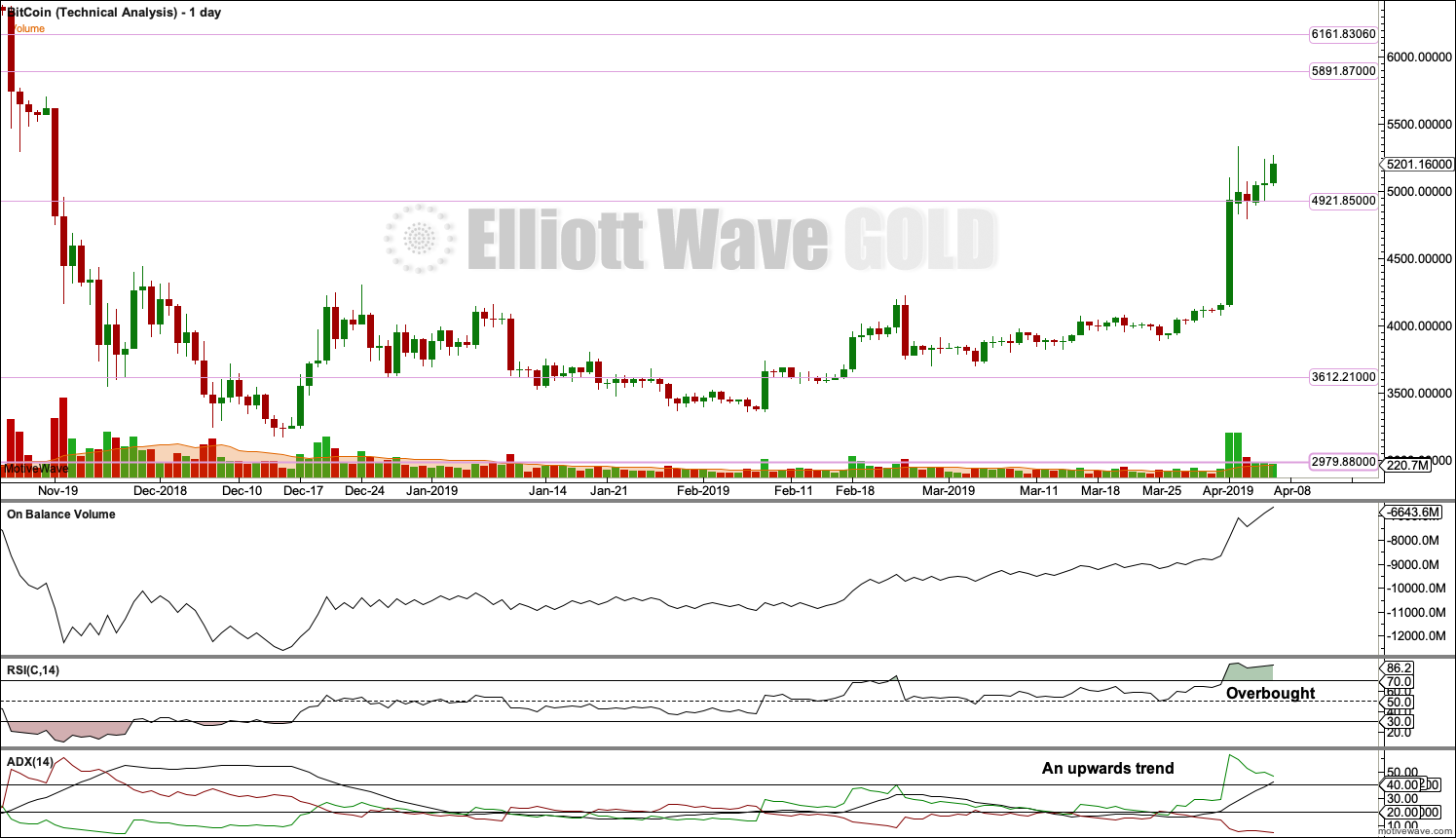 So far at the lowest low from the all time high Bitcoin has only retraced 84%. While this is deep, its corrections are usually deeper than this.

At major highs, Bitcoin usually exhibits near vertical upwards movement for about two weeks which ends with strong support from volume. Thereafter, major highs are usually indicated by a bearish candlestick reversal pattern on the daily and / or weekly chart. The current upwards movement has not yet exhibited vertical movement for long enough and there is currently no candlestick reversal pattern on either the daily or weekly chart.

At this stage, it would be reasonable to expect Bitcoin to continue to move higher, at least for the short to mid term.