Last analysis on the 17th of June expected explosive upwards movement to then be followed by a sharp reversal, which is exactly what has happened for Bitcoin.

Summary: A deep pullback is now expected to end at the 0.618 Fibonacci ratio, at 7,240. But Bitcoin’s price history suggests it may be deeper, so more likely somewhere between 7,006 to 3,809. The pullback may end in about 17 weeks.

At its end, this deep pullback may offer a good buying opportunity for Bitcoin.

This will be the last publicly available Bitcoin analysis for a while. While looking for a buying opportunity, Elliott Wave Gold and Elliott Wave Stock Market members will be given preference. 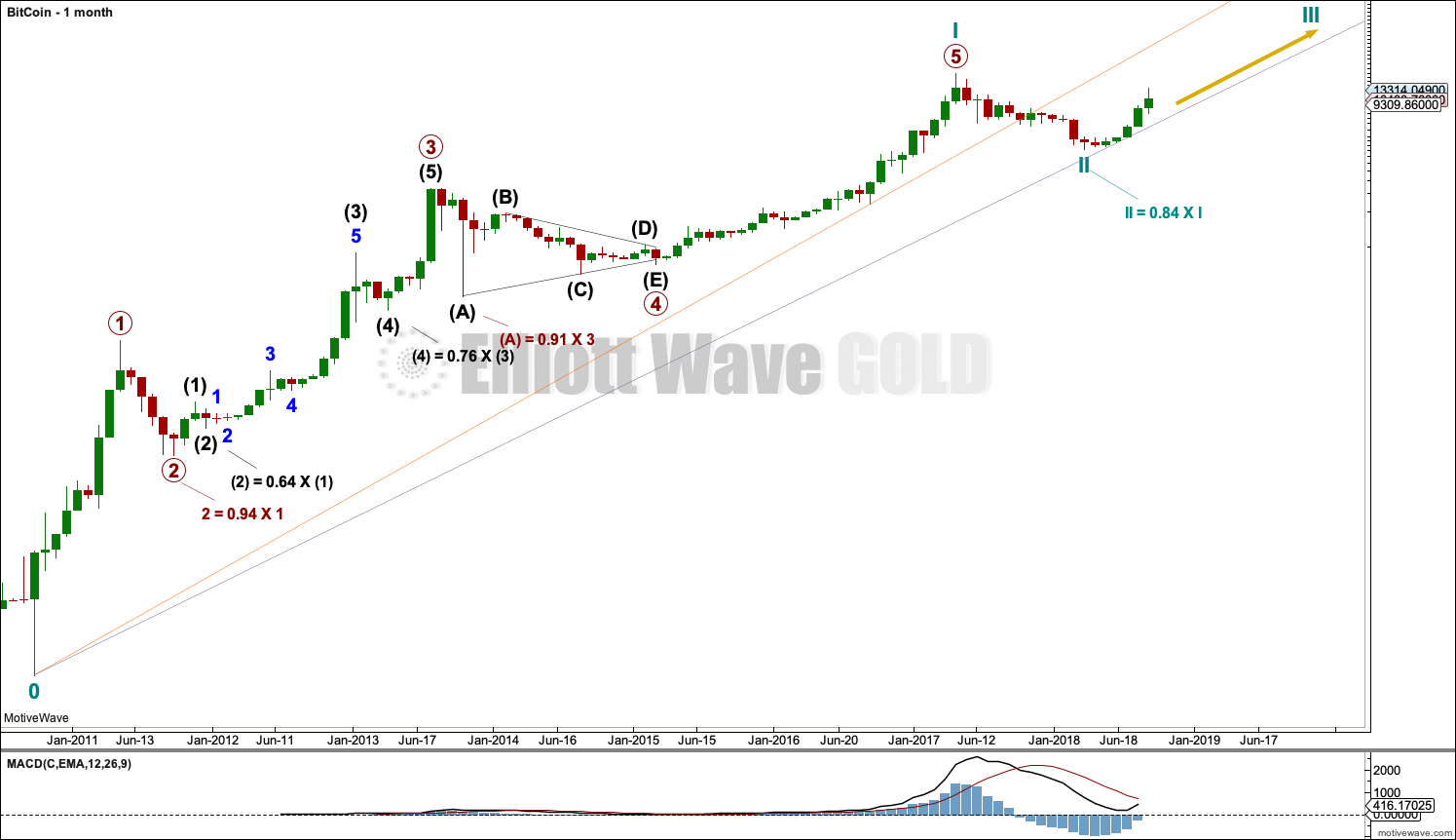 The degree of labelling within this analysis is today moved down one degree. This makes no difference to targets, invalidation points or expectations of direction for price.

What is very clear from this chart is that Bitcoin forms classic bubbles. It has done so now several times and may now be doing so again. This looks like an even larger bubble than the Tulip Mania. So far each bubble has popped and Bitcoin has collapsed, to then thereafter form a new bubble. Each bubble is larger than the one prior; so if another Bitcoin bubble is forming, it may be expected to take price substantially above the all time high. 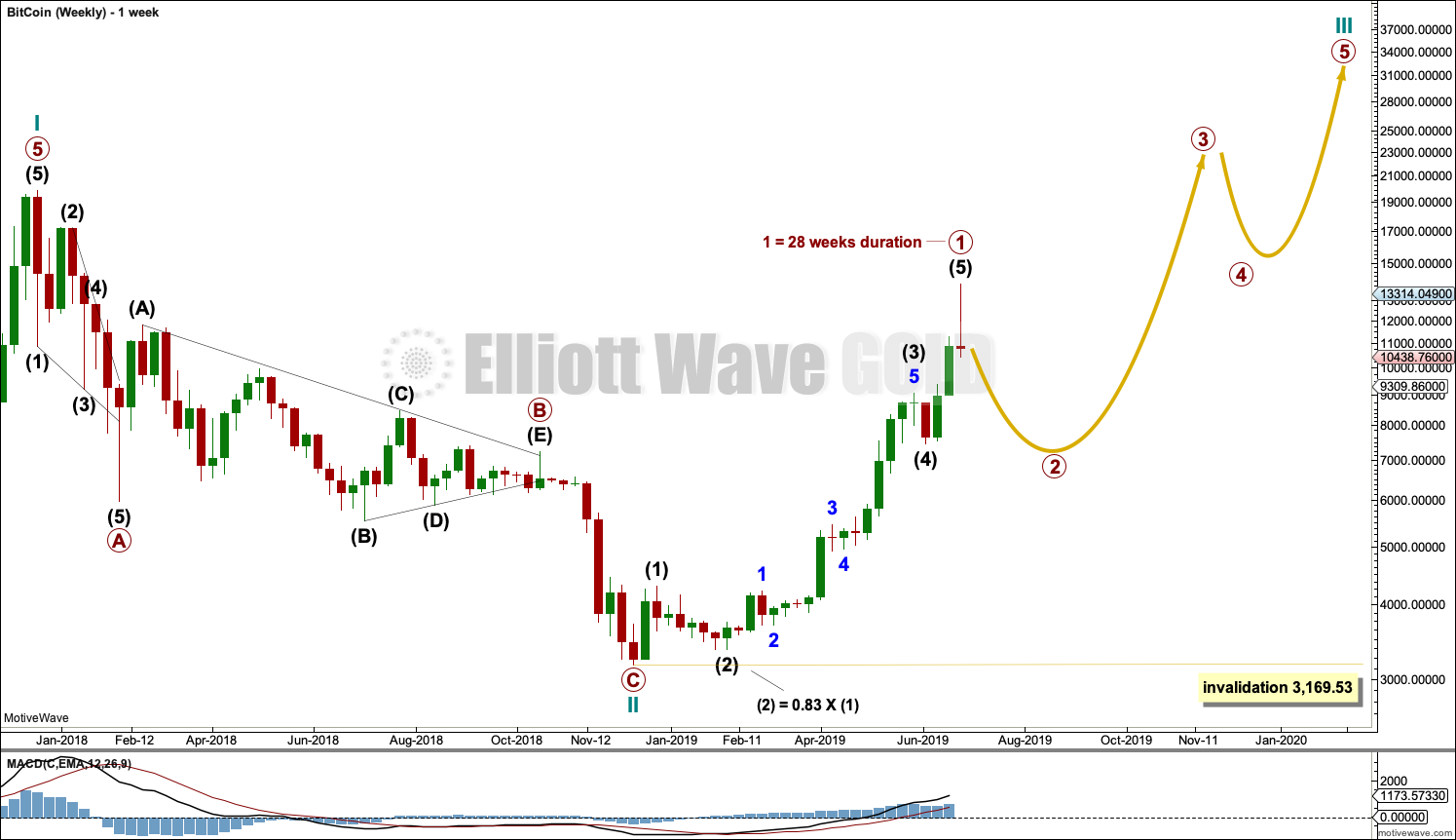 Cycle wave I lasted 7.2 years and cycle wave II may have been over within just under one year. It would be reasonable to expect cycle wave III to last about 7 years, possibly a Fibonacci 8 or 13 years.

Cycle wave III must unfold as a simple five wave impulse, and within this impulse there should be two large corrections for primary waves 2 and 4. So far primary wave 1 may be complete. Primary wave 2 may now unfold as a three wave structure downwards to possibly last about 17 weeks in duration if it is 0.618 the duration of primary wave 1.

The range of corrections for intermediate, primary and cycle degree corrections for Bitcoin is from 0.64 to 0.94. This gives a potential range for the low of primary wave 2 from 7,006 to 3,809. 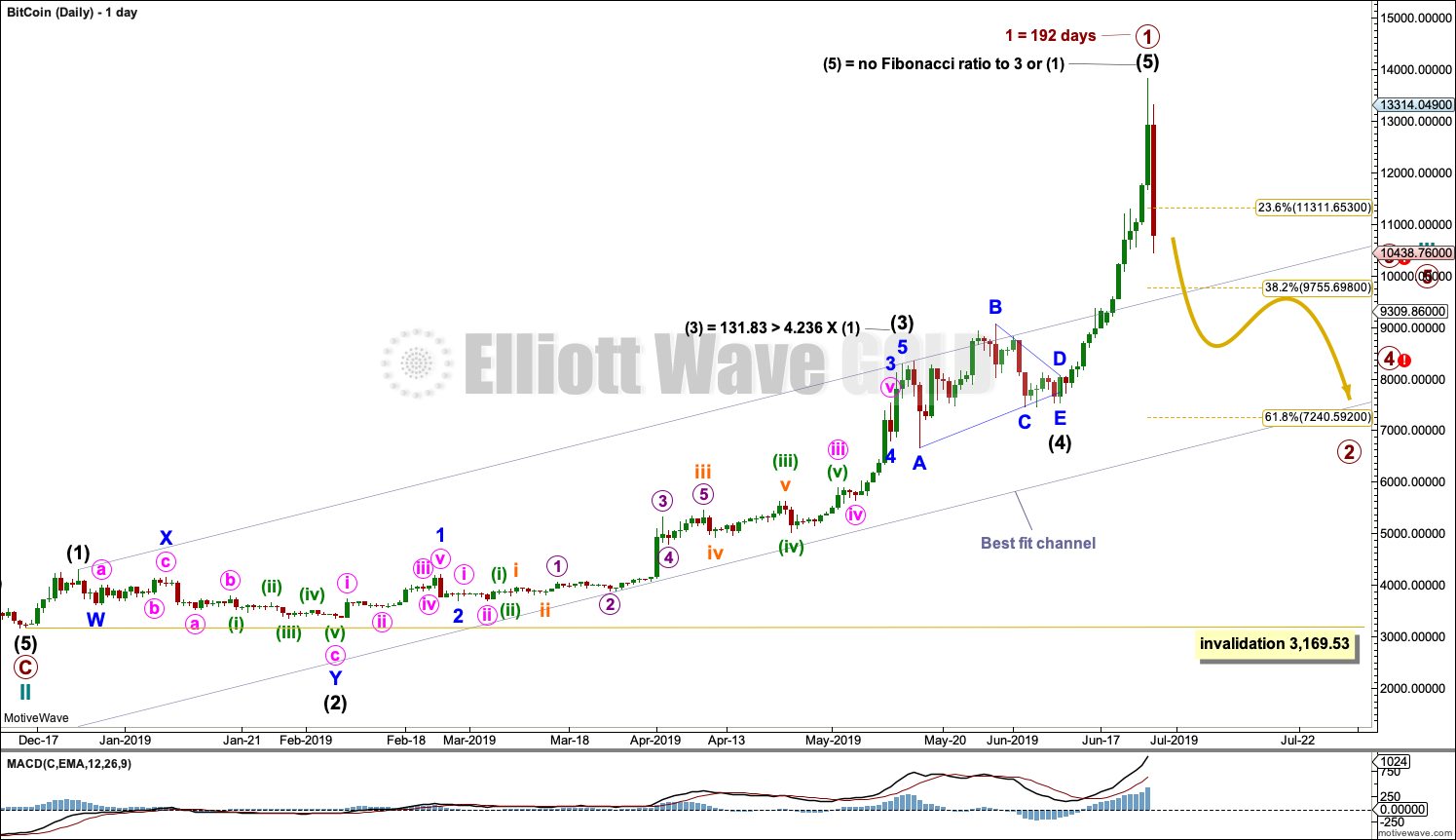 Bitcoin typically forms curved first wave impulses with time consuming and deep second wave corrections, then accelerates through to the end of its third waves, has brief and more shallow fourth wave corrections, and then finishes with explosive fifth waves. This is an extreme behaviour most typically seen in commodities.

This pattern has again been repeated and is seen clearly on an arithmetic chart for primary wave 1.

Thereafter, momentum and the slope shows a further increase to end in near vertical movement. This has now been followed by a very sharp decline.

Primary wave 2 may be expected to most likely subdivide as a zigzag. It may last about 17 weeks if it is 0.618 the duration of primary wave 2, and it may be a very deep correction. Focus of this analysis will now be on identifying the end of primary wave 2 as a potential buying opportunity.

After last analysis, the alternate wave count was discarded based upon a very low probability. To see the logic behind this decision please refer to last analysis here. 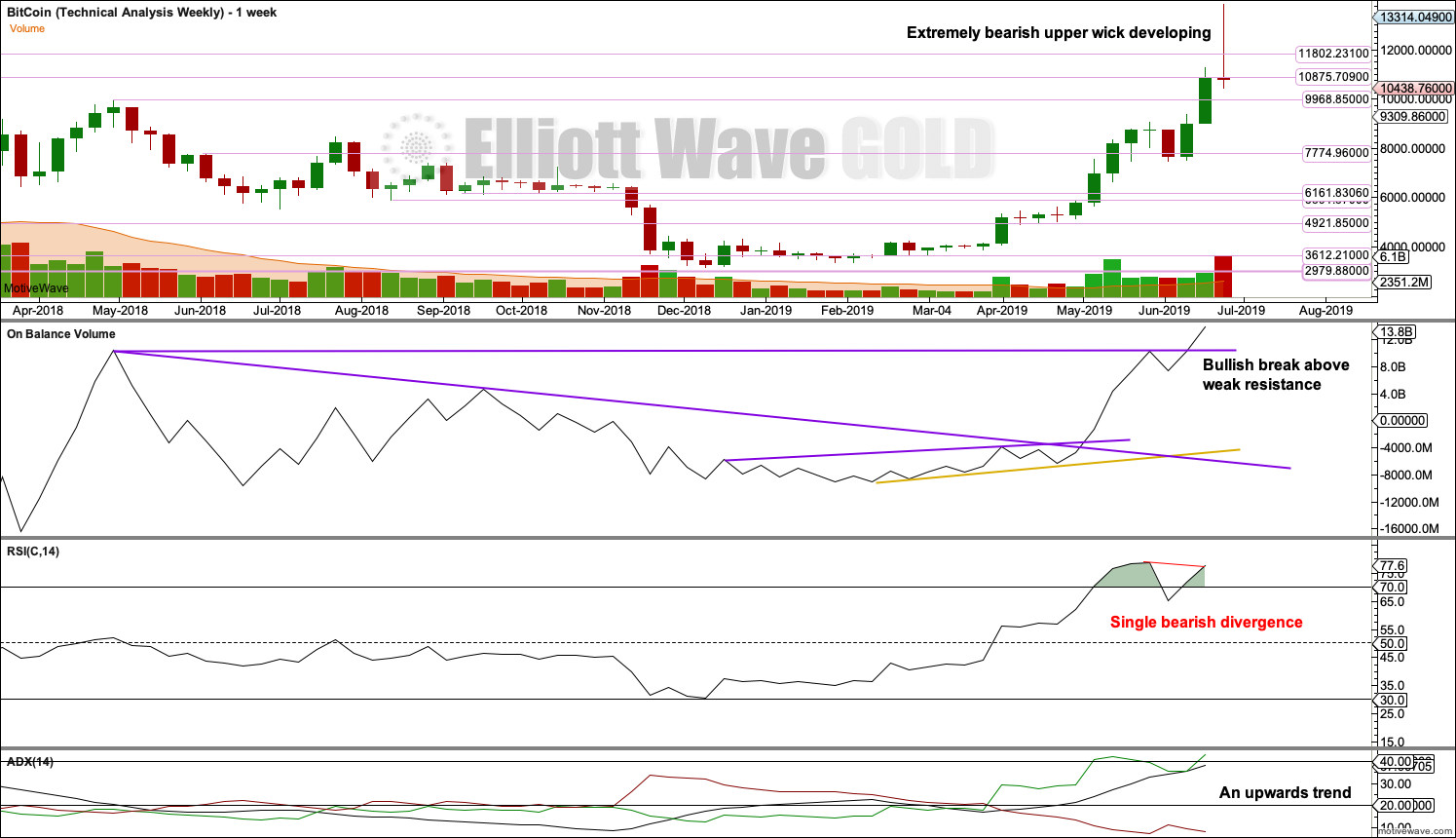 The last vertical rise now exhibits enough of the points looked for to have some confidence that Bitcoin may have found an interim top: vertical movement for three weeks, a volume spike on the last week, and a bearish candlestick reversal pattern that may be developing (although this week still has the Friday to Sunday sessions to complete). 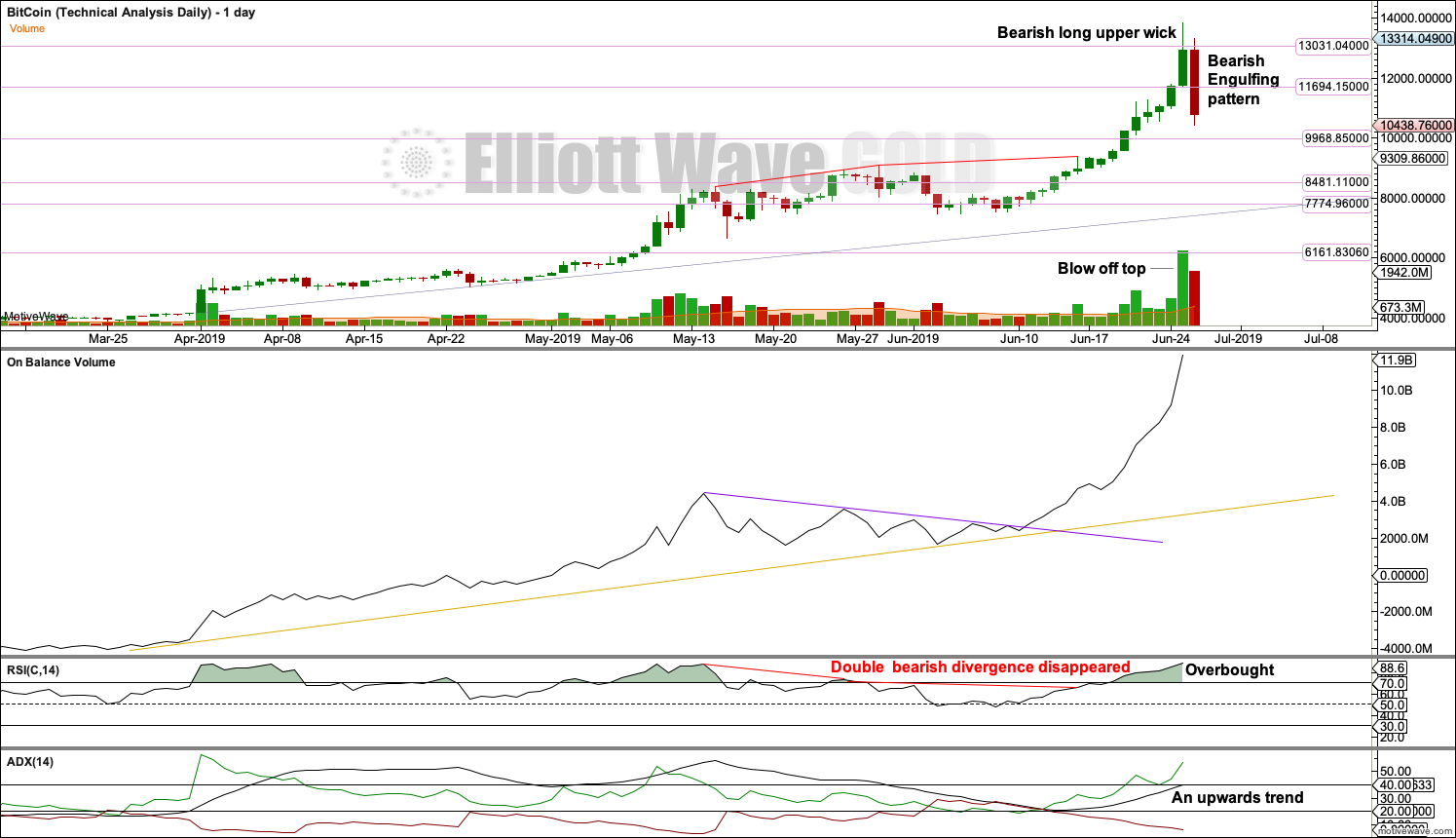 It was noted in last analysis that bearish divergence between price and RSI can simply disappear, and this is what happened in mid June.

Vertical price movement has ended with a sharp volume spike on the daily chart. There is now a very strong bearish candlestick reversal pattern complete at the daily chart level.

Support levels are noted as possible lows for the next expected deep pullback.